Okay, by now, many of you have seen the self-inflicted carnage the BMC team suffered at last Sunday’s Tour of Flanders.  5 guys down at once, Van Avermaet out with a broken collarbone.  It was pretty ugly.

This could have, and has happened, in race after race, to virtually every professional team riding World Tour races the past decade.  This isn’t unique to BMC.  I can’t stress enough that this tactic of riding in team formation throughout the race doesn’t work and is stupid and dangerous to the whole peloton.

I don’t really know who came up with this idea?  Whoever it was, did a real disservice to bicycle racing worldwide.  And why the other teams tried to emulate the practice I’ll never know?  Now everyone, from juniors to elite teams, watch it on television and think that is how it is supposed to be done. I can’t understand how everyone involved can’t see that it is a losing proposition if done throughout the season.

When Marcel Kittel wrote a Facebook post about safety in the peloton, he didn’t even mention the riders, or probably more accurately, the team directors, telling the riders to ride dangerously.  Trying to follow a team mate’s wheel is tough.  Try putting 5 of those guys in line and then say that you have to never leave your wingman, it will always cause conflict.  And when there is conflict in the field, everyone is twitchy, and riders fall.   Fighting for position, when it isn’t important to fight for position is one of my pet peeves in the sport.  Elbowing for no other reason than to elbow is idiotic.

The video below isn’t the best example of what could and does go wrong when a team lines up. The BMC guys are on the side of the field moving up in the wind.  This is over 100 kms. from the finish of the race.  More than 2 hours from the finish.  How many guys does it take to escort a rider to the front of the field?  Look at the field, it is 10 across, it isn’t close to going full gas.

Remember a few years ago at the Giro when virtually all the contenders of the race crashed and lost time early in the race.  Cadel had his team position him at the front the last hour of each stage and it seemed to pay off.  But in reality, he was the last man standing.  All the other teams were trying to do the exact same thing, but their GC rider fell.  So one guy staying upright and 5 riders losing time through crashing doesn’t make Cadel’s tactics correct.  The announcers kept saying that Cadel was so good at positioning and staying out of trouble, when in reality, it was just blind luck that he wasn’t one of the casualties.

And I hate to say it, once again, but radios play a big role in this problem.  What are the chances that the BMC guys would have all gotten together at this point in the race and decided to move up to the front independently?  Virtually zero.  Someone was talking into their ears telling them to do this.  I think one riders would have been sufficient to escort Greg up to the front of the peloton. When I hear riders saying the radios are there for safety, I laugh.  99.9% of the chatter going on isn’t anything about safety.  Much more of it is about doing stuff that is unsafe for the peloton. Information that makes riders make stupid moves.

There is so much collateral damage when these teams do this.  No one mentioned the Astana guy or the others that fell here.  It isn’t only the team that is riding in formation that falls, tons of other guys.  This just makes the peloton more twitchy, from the start, thus the race less safe.

You can’t regulate this tactic. No rule will cover who a rider chooses to follow during a mass start bicycle race.   The teams came up with this on their own and they need to quit doing it own their own.   They need to quit fighting for position when it isn’t important.  They need to think that they have the right to put their whole team at the front of the field when they aren’t riding in the wind.

If they want the benefit from not being exposed to other riders from other teams, then they need to be at the very front of the field riding hard.  Not riding at the edge or in the middle of the pack getting the benefit of the drafting.  It is lazy and stupid bicycle racing and the practice needs to stop.  I don’t see that happening though. 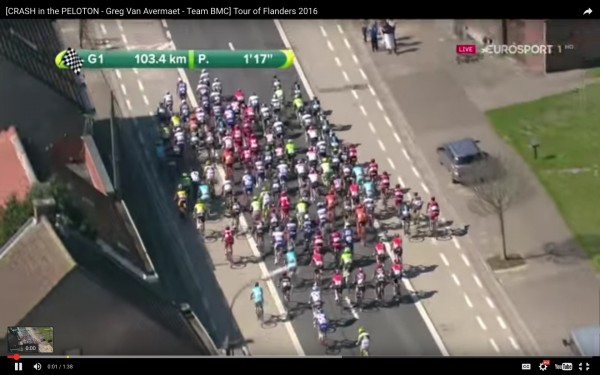 Look in this screenshot of the video how many teams are riding “in formation” on the interior of the peleton, riders on both sides of them. How impossible is it to follow one rider through the field for the whole race. Really impossible. 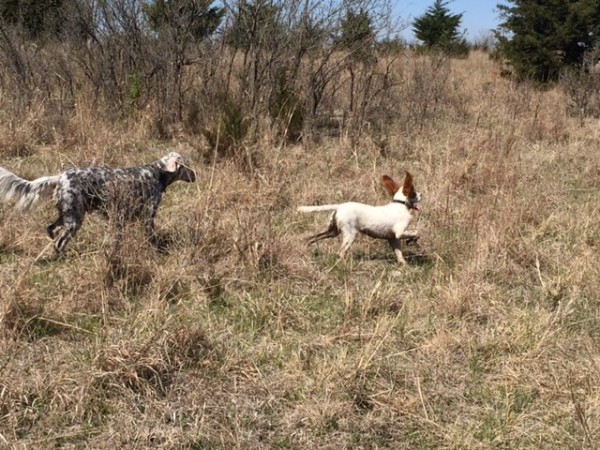 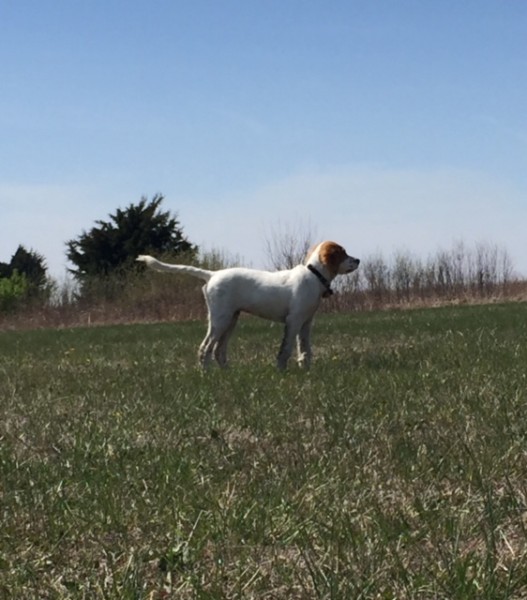 He is growing into a dog.

15 thoughts on “Riding in “Team Formation” is Idiotic.”