Yesterday I rode over to Lawrence to start my 2016 race campaign.  I would have much preferred doing a long road race with moderate climbing, but instead, did an hour criterium, points race no less, in 25 mph winds.  Exactly the opposite what I am trained for, but obviously what I need to work on.

It is 25 miles each way to the course from my house, plus the hour race, so it worked out to be nearly 80 miles still.  I didn’t feel that great riding over.  John-Jack and Bill were pulling a group of us, with cross/tailwind, and it felt like they were hauling ass.  That is never a good sign.  I think it was because it seemed so hot, in the mid-70’s.  I can’t believe that in a couple months, that will feel cool.

Anyway, we got over there way quicker than I had anticipated, so we had about an hour to wait until the start.  I remembered from a couple years ago how guys get so excited early season that they start crazy hard.  And it was the case once again.  I think after 15-20 minutes, I looked down and had a normalize wattage of 380.

Since it was a points race, there were 3 sprints during the race, plus the final.  I sort of tried all 3 times, with not that much success.  I sort of am riding a little within myself because my left hand isn’t working all that great, thus the front brake is kind of non-existent.  There were 4 places and I was 5th the first two sprints.  After the 2nd one, I took off, and John-Jack came with me.

He pulled thru the first time so hard I could barely stay on, but I had just sprinted.  My heartrate was staying pretty high for me, so obviously I wasn’t recovering very well.  We only rode a couple laps off the front, but that softened up the Olathe Subaru team, that had 6 guys.  They had gotten 1-4 in the first two sprints, I think.

Before the 3rd sprint, Bill came up and asked me if he should lead me out.  I told him that I was okay, but he should attack after the sprint.  I started the sprint later, and got a little crossed up right before the line, but finished 2nd and got some points.  I could tell everyone was dead.  The field of 30 or so had be whittled down to something like 12.

Right then Bill and John-Jack came flying by and that was sort of it.  The Subaru guys were trying to catch their breathe from sprinting and Bill and Jack got an okay gap.  One other guy from Groove Cycling, a Colorado team, jumped a couple laps later and bridged up to the front two in a couple laps.

And that is the way it stayed.  I figured that Bill finishing top 3 in the final sprint was as best as we were going to do.

I finished 3rd in the field sprint, there were 8 places for points.  Bill was 2nd in the final sprint, so finished pretty good.  We had to leave before the results were posted because it was going to get dark.

I think we probably finished 4 and 5th, but could be off on that.  It is amazing how hard bike racing can feel when you haven’t done it in a few months.

Today we’re driving 3 hours to Columbia Missouri and doing a road race.  It is 63 miles, but is going to be super windy, so lots of gutter riding.  I think I am in better shape for gutter riding than sprinting, but we’ll see.  Early season you have to pay your dues.  And using racing to get race form is one of the ways, no matter how painful it is. 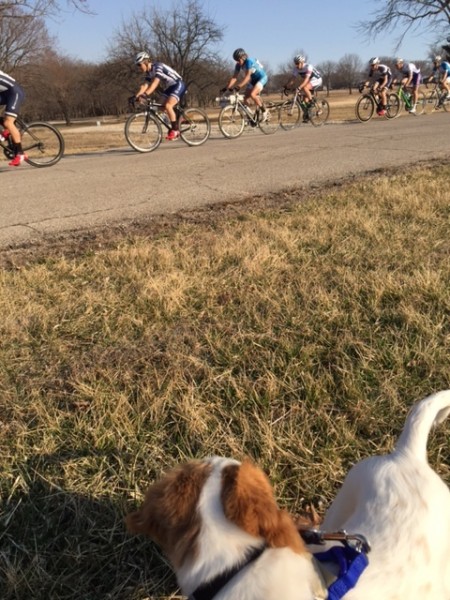 It was Tucker’s first bike race. 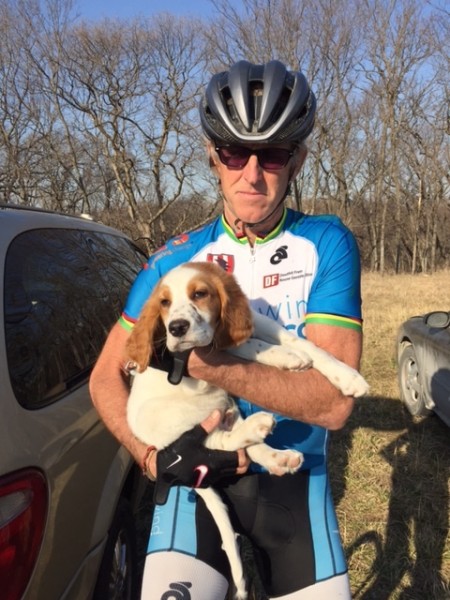 He wasn’t so sure what to make of it before the start. 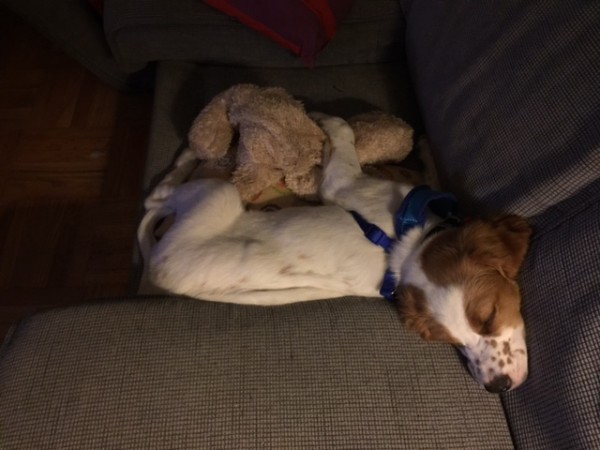 He was pretty zonked after the full day.