The first time I saw anyone ride with lights on during the day was when I flew out to California to ride the Donut Ride with Seth Davidson.  He was using them on his bike.  Then I started noticing lots of SoCal guys using them.

No one in Kansas, that I ride with, uses them.  My initial impression was that they seemed sort of geeky.  But, maybe that has changed.  I think as they become more mainstream that it won’t seem so extreme.  And it really isn’t extreme, it is just another thing.

My bike is already bothersome with these other things.  Charging a Garmin on a daily basis is a drag.  The power meter is just there, until it isn’t.  I guess the lights are just on your bike all the time and you just have to turn them on and off, so it really isn’t that much of a hassle.  But, they must take a ton of power, so you must have to recharge them periodically.

It is amazing how bright the daytime lights can be. Even the small ones are incredibly bright.  At dusk them seem almost too bright.  But I guess they need to be too bright at night to be seen at all during the day.

I saw the results from a couple different studies that show that the lights reduce chances of collisions with cars somewhere between 19-35%.  That seems pretty significant, but you have to realize the odds of getting hit by a car is super low, so you’re just reducing a super low chance that much more.

Lots of guys out here are using them.  I did a ride on Saturday and 2 out of 5 guys had them on.  I’m not that concerned about being seen just yet.  I think to be comfortable riding on busy roads, you need to assume that everyone coming from behind sees you.  And I don’t worry about the guys in front of me.  That is my responsibility.

Anyway, maybe soon, our whole group ride will have these things on, you never know.  I think as they become more common, they become a little less effective, but that is one of the reasons construction workers keep switching from orange to yellow to reflective vests.  Whatever keeps you safer is probably better. 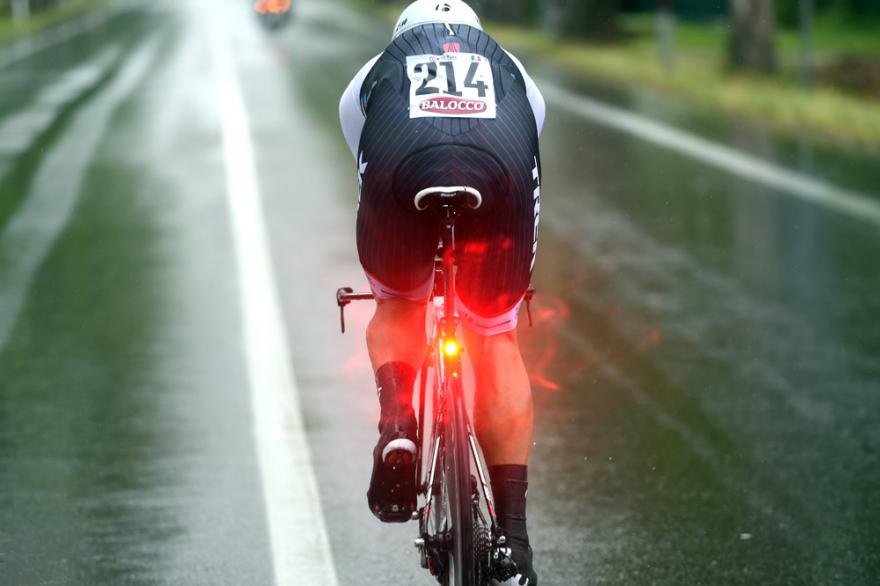 Bontrager has a new line of lights this year. I’d have to draw a line on using them to race. They are too bright and would make racing less safe. When I’m racing a nightime criterium and someone has a light on, it bugs me to death.