People say that it really isn’t getting any warmer around, but that isn’t the case in the state of Kansas.  I’ve lived here virtually my whole life and the weather isn’t close to the same as it was when I was a kid.  I used to ice skate and sled often during the winter back then.  Now it rarely gets cold enough to have thick enough ice to skate.  It still snows, but not like it did.  It is supposed to be in the mid 60’s the next two days.

Anyway, a couple days ago, I was riding in shorts.  It was nearly 60.  We were out by a little town, Harveyville, and over in the ditch, by a dormant corn field, there was an armadillo.  I’ve seen a few armadillo road kill around Northeastern Kansas, but have never spotted a live one.

When I see an armadillo I automatically think of  Texas.  I used to think that armadillos were only in Texas and Oklahoma.  But, not now.

It was a fearless little guy.  It was so intense on rooting around that it didn’t even notice us.  We got within a couple feet of it before it raised its head.  It still wasn’t too scared.  It finally hopped off into the corn field.

It is always fun seeing new wildlife out on a ride.  Especially new wildlife that hasn’t really been indigenous in the area.  It really made the ride. 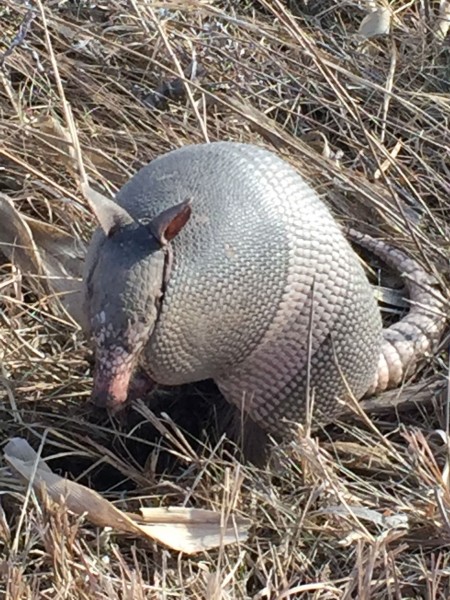