Yesterday I was riding with my brother and Bill and it was pretty windy.  Not really windy, just pretty windy.  It was probably less than 20mph, but not by much.  Bill was saying that he didn’t think that he’d done a ride in January with wind less than 15 and most of the time it was more.  I agreed.  He was sort of complaining about it.  He said he would appreciate a calm day that he could just go out and do a long ride and not have to fight the wind.

I told him I thought the wind was great.  I give the wind credit for the reason that many times, riders from around here beat up the competition pretty seriously at the regional races in early season.  There is no easy riding when the wind is blowing over 20 most of the time.

I’ve always liked the wind.  I’m not that big on straight tailwind (because of my lack of power), but I do like wind to help make the plan at the start of the ride.

Early season, I’m not big riding into straight headwind off the bat.  When it is super windy, we tend to try to do more crosswinds on the ride.  I’ll usually try to convince everyone that we generally head out against crosswind, slowly jogging into headwind every once in a while, thus storing up the potential tailwind for the ride home.   It doesn’t really do anyone any good by having to struggle into a 20 mph headwind, while the rest of us are sitting on going way too easy sitting on.

I’ve raced in some pretty windy places.  The windiest has to be in Southern New Zealand.  The Tour of Southland is a windy mess.  And by windy, I mean 50+ mph windy.  I did that race 3 or 4 times and it was always the same.  One year there, they stopped a stage at the top of a climb because the officials had deemed the descent too windy to race.  I wasn’t into that at the time, but now looking back upon it, that was a good decision.

Races in windy conditions interest me.  I like the dynamics of fighting for positions.  Riders with more experience will nearly always excel in these conditions.  I wrote a post about racing in New Zealand a few years ago.  It shows how being smart in big wind can work out well.  Here is a link.

Anyway, don’t let the wind scare you off when considering whether you’re going to be riding inside or outside this winter/spring.  And never skip a windy race.  Racing in the wind is the absolute best way to get good at racing in the wind. 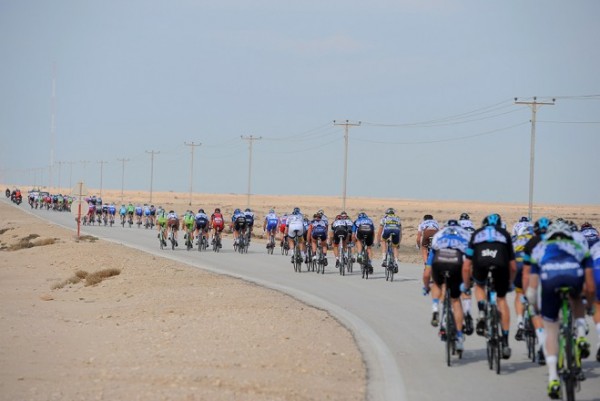 Historically, it has been pretty windy racing in the Middle East. I think the beauty of cycling exposes itself with windy echelons.