Okay, it has been exactly 16 days since I broke my thumb and ribs in Asheville.  Sometimes it seems like it was just a couple days ago, but most of the time it feels like it has been an eternity.

I have been riding the trainer pretty consistently.  I think I’ve only missed two days since the accident.  Yesterday I rode 2 1/2 hours.  I was producing pretty good wattage I think, but still it is riding a trainer.

It is snowing right now in Topeka.  Supposed to snow all day.  If I weren’t injured, I’d probably call Bill and go ride trails over at the governor’s mansion.  I think riding when it is sketchy out is important.  It gives you skills and confidence to be able to do it during a race.  In actuality, most of the bike handling skills you get to race in sketchy conditions, happen during races, but you need the confidence to be able to attain those skills and that comes from training.

I called Vincent yesterday and he is in Sedona riding.  I was supposed to be there with him.  We were going to go to Arizona for a week and then race a 50 mile MTB race on Saturday.  I would love to be there.  But, I’m sitting around home, getting all sweaty and anzy.  Maybe that is a good thing in the long run?  I sure hope so. 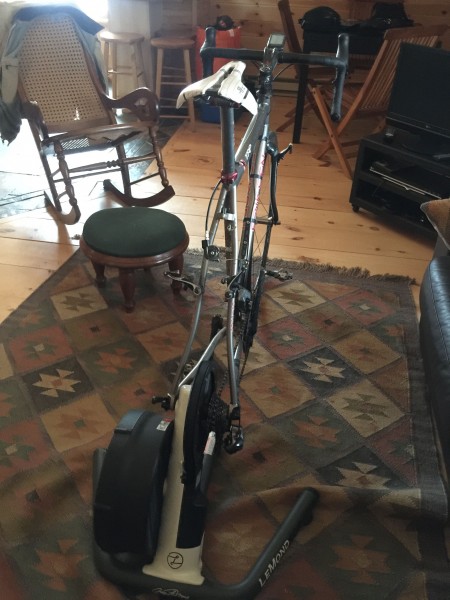 My cross bike on the trainer at Dennis’. I need to put my road bike back together. Maybe I’ll make that a project for the day. 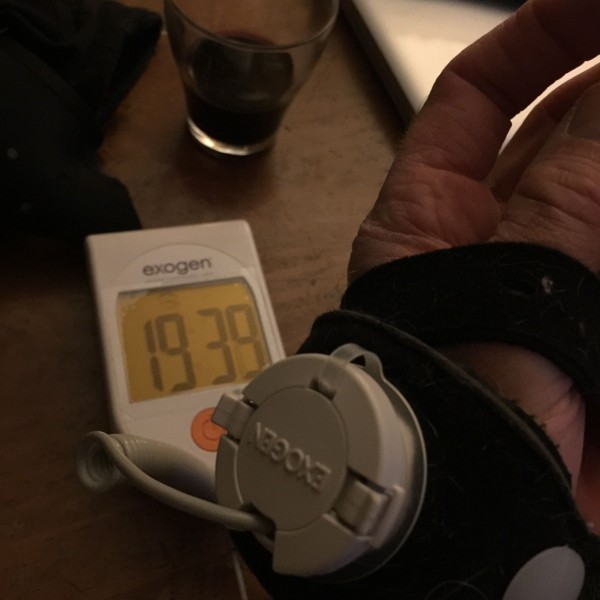 I’ve been using this Exogen ultrasound bone healing system to help my thumb get better faster. It is hard to tell, but I guess it works.