Hi guys. Enough of that Verizon BS.  Man, 2015 flew huh?  It is hard to believe it is already nearly a new year.  I’m not sure what the deal is, but as I get older, time seems to accelerate.  The perception is a little unnerving.  My grandmother lived to 99 years old and I think a day must have passed like the blink of an eye.

2015 was a pretty good year for me.  I can’t really complain much about any year I’ve lived.  I enjoy things too much to let life get in the way of happiness.  I have to admit, Bromont not being around for the last half has been a little hard to handle sometimes, but the good memories outweighs the sadness most of the time.  Plus, my friend Glenda Taylor, who was killed on her bike at Kansas State Time Trial Championships.  She has and is continued being missed by all of her friends and family.  Life is unfair in that regard.

For some reason, I seemed to really like riding my bike more this year.  I didn’t take nearly as many rest days, or maybe I made it a point to ride more when I was travelling.  Whatever the reason, I rode 341 days this year, missing 24.  4 of those are from painting a house.   So I missed about 2 days a month.

Not counting today, I had 14,621 miles for the year.  If you divide that by the days I rode, it is about 43 a day.  For some reason that seems like too many, but numbers don’t lie.  I haven’t kept track of how many races I did last year, but I’ll try to count them now.  Pause. I think I did about 30, which has to be close to an all-time low.  I spent a month in Colorado just training for Leadville, only doing 1 criterium the whole month, so that cut into the total.  Plus, I really didn’t do any stage races, other than Quad Cities and Labor Day in St. Louis, which were 4 races each time.  I need to race more, which should be a New Year’s Resolution.

Here, close to 1.8 million people came for the year.  That seems like a lot too.  If you divide that by the day, it is a little less than 5000 day.  I’m not sure, and I’m not going back to count, but I posted just about everyday.  I know I missed a few, but I’ve been pretty conscientious about trying to put something out.

You know, this blog thing has really changed the way I interact with people.    I’d have to say that is the biggest thing I’ve noticed, personally.  I think I’ve become more of a sympathetic person.  At least I am more open to other people’s views than I used to.  Plus, talking to strangers isn’t nearly as hard as it used to be either.

Cycling is a very small thing.  Bike racing, even smaller.  But many of the people involved in it are very, very passionate.  I am for sure.  I have so much to thank cycling for my whole life.  It regimented my life, from a very early age, made me understand the choices you have to make in life to be able to attain your dreams.  And it let me see other people’s dreams, thus expanding mine.

Bike racing isn’t about how many races you win, it is about the lifestyle, the ride.  And, personally, I can’t imagine a better lifestyle.  It is a very unique sport that allows athletes of varying abilities to train together to everyone’s benefit.  I never  take it for granted.

Plus, the travel.  I think it is our responsibility, as humans, to understand how others live.  And you can’t do that unless you see it first hand.  I’ve been fortunate  enough to travel all over. And I’ll tell you once more here, if you’re reading this, you won the lottery.  Don’t take that for granted.  Live your life accordingly.

Okay, there is a cyclocross race in 3 hours in Kansas City, Cross of the Old Year.   I’m straddling the fence on going. RIght now I’m leaning towards not.   I have a bunch of stuff to do and have been feeling a little under the weather.

I guess I deviated from the numbers theme.  Oh well, that is how my mind works.  Hope everyone has a super New Year’s Eve and an even better 2016.  Strive for the unattainable, you might surprise yourself. 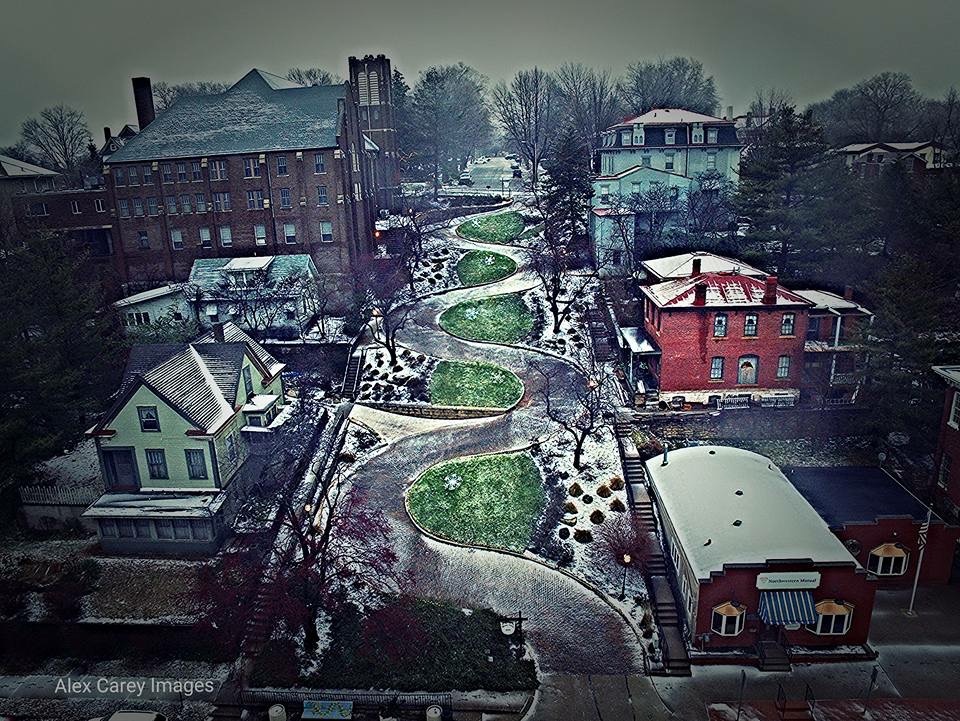 I saw this photograph of Snake Alley on Facebook. It is by Alex Carey. The guy has a super eye. Probably my favorite place to race bikes.