Yesterday I called Bill and we decided to go over to the Governor’s Mansion and ride MTB on trails.  The problem was getting there.  The roads were pretty sloppy from salt and sun.  Bill had ridden there the day before and he said after he got to the trails, they were pretty good.

I was running late and just decided to take the main roads the 5 miles to the trails.  My butt was getting pretty much soaked from road spray.  Plus, whereever there was ice, I was sketched out some.

Bill had been there 5 minutes and was getting cold.  It was my fault.  You can’t be late meeting up with someone when it is below 30 out.  That is a major rule breaker.  We started riding on the trails and I was following Bill and riding horribly.

The trails are on the side of a hill, with the Kansas River at the base.  So, there is a lot of climbing and descending.  I was all over the place.  Ever since I broke my hip last year, I can’t say that I ever feel that comfortable riding on ice.  And there was a lot of ice under the snow.  Places that had melted the day before and then hardened up were really slick.

Bill led the first lap and I kept dabbing, mainly climbing.  But I got better.  That is one of the coolest things about the sport, you can always get better.  I’m not sure where my ability level is on ice now, but it is a lot better than it was yesterday.  And if you have no experience riding in those conditions, let me tell you, it is amazing how fast you can ride on singletrack with ice and snow.  But, you need to follow someone experienced to realize your potential.

So, we rode two laps and by the end of the 2nd, I was going way faster and felt way more comfortable, which allows you to even go faster.  I didn’t hit any trees, but did fall once.  I flipped over my bars going through a dip and landed face first into a brittle bush.  It was a flesh wound.

The roads cleared a bunch on the way back.  It is amazing what a little sun will do.  We thought we would road ride today, but it snowed just a tad again last night.  Just enough to make the roads messy again.  Plus, it is going to be hovering just below freezing, so it is the perfect storm for slop.  I might skip riding trails.  I might have pushed my luck yesterday, only a week before cross nationals.  Looks like it might be an indoor day.  Boo. 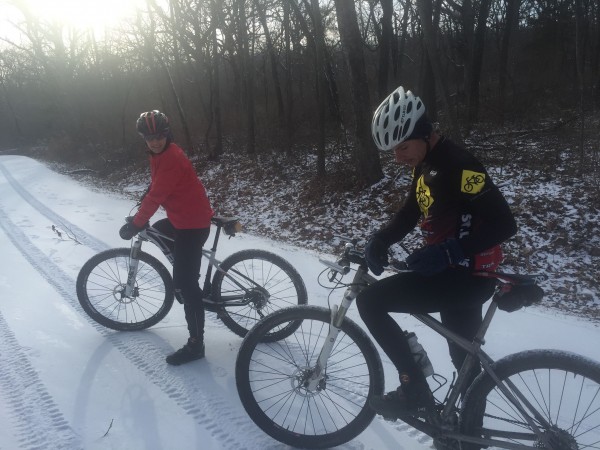 Trudi showed up, but didn’t want to ride trails on the ice. 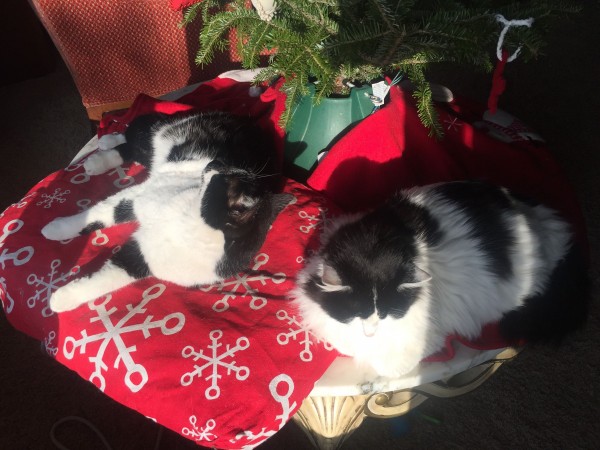 The cats have all gotten chubby and are laying around all day instead of being outside hunting.

2 thoughts on “Trail Riding in the Snow”