Yesterday I was on the fence about whether to go riding outside or inside.  It was in the 20’s and the wind was howling from the North.  I went out into the garage and decided to brave it.

I had ordered Trudi some Bar Mitts for Christmas, but they didn’t come her size, they came large, so I decided to try them.  Bar Mitts were showing at the expo at Jinglecross and since they were supporting cross, I figured to give them a try.  Vincent had told me about them and he had said that you can ride down to near freezing with nearly bare hands.   I called him for advise of glove thickness.

Anyway, they are super easy to install and off I went.  The one thing about them, well there are two things.  The major thing is that you have to watch yourself in crosswinds.  These guys have a significant aspect exposed to the wind.  Like you have little sails on your bars.  So when the wind is blowing at 25 mph it really isn’t a good idea to remove a hand from the bars.  And never remove both hands.  That would crash you.  Bar Mitt themselves warn about this.

The 2nd thing is that you have to be aware that you have your hands in little pouches.  This isn’t such a big deal.  You just have to pull your hands back to get them out.  It gets second nature pretty quickly.

Anyway, they are great for cold riding.  I have so much stuff on my bike nowadays it looks so dorky.  And, I have to say, nothing looks much dorkier than these neoprene covers on my levers.  But they work.  Really well.  I ended up riding nearly 3 hours, which would have been impossible without them.  I should probably get some for my MTB.  Maybe I’ll call them and see if I can work out a deal?

Anyway, I started East, with crosswind.  It was way too hard to ride against.  Pretty early on I decided I’d ride to Lawrence on pavement, get a cup of coffee and head home.  Seemed reasonable.

Right outside Topeka, on the shoulder I saw a couple quarters.  I stopped to pick them up and it was a quarter bonanza.  I’m not sure how they all got out in such a confined area, but there were 25 quarters laying on the road.  This was the 2nd time I’ve found a bunch of change out riding.  The first time it was much more appreciated.  I wrote about that here.   Anyway, it kind of made the day.  I’m not sure why it is, but finding a free $6 seems like a bigger deal than working for it and getting a check.  It just seems better, maybe because it is unexpected.

When I was stopped, I called Brian to see if he wanted to meet up.  He is selling his car and said he had to show it.  He said we could meet up today to ride.  That ain’t happening.   So, I was solo.

It finally snowed last night.  Pretty much the first snowfall of the year.  But, it didn’t snow as much as predicted.  It hardly snowed a couple inches, but they are predicting more later this morning.  I haven’t been out, but it was icing at midnight, so if the concrete is covered with ice, I’m probably not riding outside today.  If it isn’t, then I’m going to brave it, even though the wind is supposed to be blowing close to 40 later.  I sort of like riding on the road in big winds, it makes it interesting.

Okay, I have some bike work to do too.  I got some new Di2 levers that accept the sprinter shifter plugs, so I’m changing the shifters on my cross bikes.  That is a hassle since I have to chance the brake cables at the same time.  I guess I should get to work. 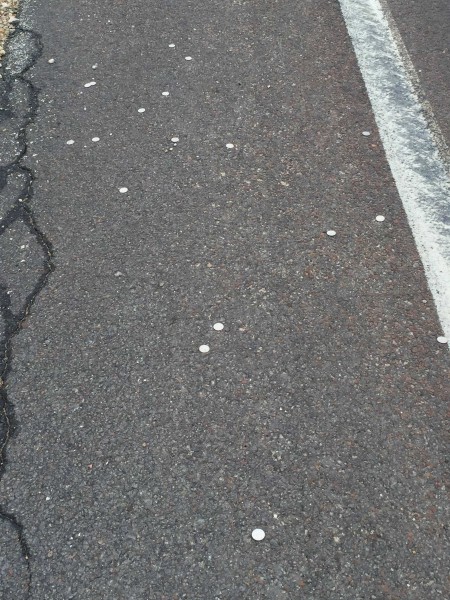 Quarters on the road. 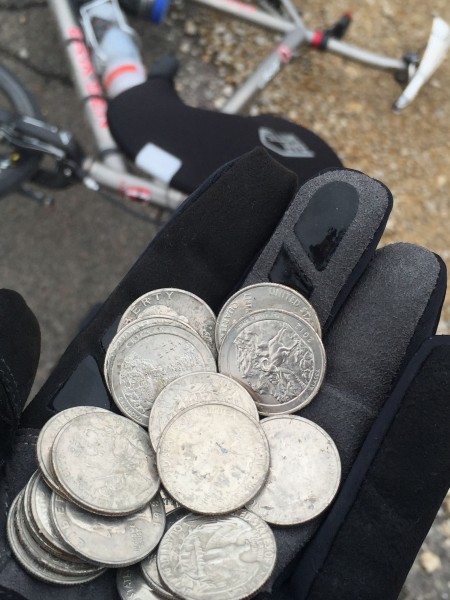 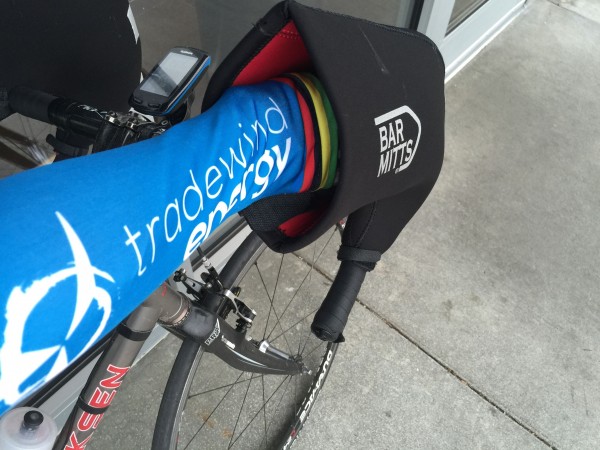 Bar Mitts. They allow you to ride down to just about any temperature I’d guess.