Yesterday I rode over to Lawrence on gravel, go my van and drove over to Kansas City to retrieve a car part.  I was driving on Hwy. 24, with is a Kansas highway, not interstate.  I had underdressed a little and didn’t really feel that good anyway.

I felt a little bonky and decided to stop at a Caseys General Store and get a slice of pizza and coffee.  Their pizza isn’t have bad, but their coffee could improve some.

It got me thinking about an experience I had in Switzerland right around 30 years ago that still cracks me up.

Back in 1985, I had ridden the World Road Championships in Italy and then drove up to Switzerland with my team director, Michael Fatka and Trudi.  We were going there because Michael was looking to get a dog, a Swiss Appenzeller, sort of like a Bernese Mountain dog.

Anyway, we were hanging out in Appenzell, a region just east of Zurich, close to Austria, looking at farms for these puppies.  It was a good adventure.  Super scenic area to ride a bike.  You should make it a point to go there if you have a chance.

One evening we decided to go for fondue, because the region has a famous cheese.  So we go over to this pretty expensive fondue restaurant and there is a wait, but the hostess tells us, in German, to go to the bar.  So we go to the bar and order a beer each.  She said it was going to be close to 30 minutes.

Just after we got our beer, the hostess came over and told us that our table was ready.  So we took our beers and started to follow her.  She saw that and told us we could not, absolutely could not, bring the beers to the table to have with the fondue.

Trudi can speak German, but the woman was speaking Swiss German and she explained to Trudi that the cold beer and hot cheese would kill us.  Yes, she said kill us.

Her explanation was that the cold beer would harden up the cheese in our stomachs and that we would get sick and die.

So, we had to finish our beer in the bar and have warm white wine with the fondue.

I made a lot of good Swiss friends over the years and each and every time I ask them what they think about the idea of drinking cold beer with fondue.  Not one has said anything different than the hostess.

I have a friend, Trudi Karrer, who I stay with near Zurich, and saw just a couple months ago at the Richmond World Road Championships.  She told me for sure you would die.

My friend, Thomas Frischknecht, who came to the US when he was 19 and is a smart guy, answered similarly.  Thomas said you might not die, but you’d get really sick.

My best argument to them is what is the difference between fondue and pizza?  Both are bread covered with melted cheese.  And we drink plenty of cold beer with pizza.

My rationale is that once food gets into your stomach, it eventually gets to 98.6 degrees, or whatever your body temperature is.  It really doesn’t matter how you mix it because it all gets to the same temperature.

Of course, you can shock your system by ingesting a ton of super cold stuff.  I remember drinking a huge fresh fruit slush at Sonic after a hot ride and the whole way back to my house, I could feel the skin on over my stomach and it was super cold.  I thought that was creepy.  But I would have no problem eating pizza and drinking a slush, which is just about the coldest thing I can think of to drink.

Anyway, I never could, or can convince, a Swiss person that fondue and beer won’t make you ill, or worst case scenario, kill you.   It must be something that they were taught from childhood. All of them.  And it seems to have over ridden critical thinking.  Funny. 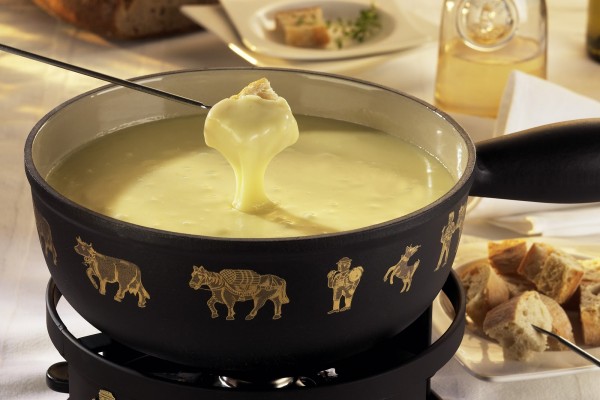 23 thoughts on “Death by Fondue”