Yesterday I rode my cross bike twice on the Lemond trainer, watching movies.  I rode once early, then went to Keith and Catherine’s house to have 2nd Thanksgiving dinner, came home and decided to ride another hour at 9:30pm.

My cross bike has my power meter on it, so the numbers should be the same as riding outside, right?  It is a bunch different than riding outside.  It is smoother, much less effort to increase rpm’s.  But the pressure on the pedals seems pretty right.

I wasn’t doing any structured workout.  I was just trying to put in the time.  Saying that, I still couldn’t help myself and not check out the wattage time to time.

My two observations.  Starting, the wattage seem pretty low and I seem to be “off”.  But after about 10 minutes, the watts went up about 50 and the effort seemed easier.  I guess that is why you need to warm up some before hard efforts.

My 2nd observation is a little unproven, but right now seems perplexing.  I played around, just for a couple minutes, with pedalling one leg at a time.  I’ve seen guys warming up at races doing this and was curious about what that was for.

So I pedaled with my right leg first and then the left.  What was weird is that it seemed pretty easy to ride about 175 watts with either leg individually.  It seemed like it was easier with my left leg, which is “my bad” leg.  I’m pretty sure that my left leg is stronger than my right, which is counter intuitive.

Anyway, it seems like if I can ride 175 watts with each leg it seems reasonable that it would be just as easy to ride 350 watts with both legs.  But that isn’t the case.  Riding 350 watts is much harder than riding 175 watts on each leg.

I do understand that it takes close to twice as much oxygen for both legs going around than each individual leg, which makes sense.  But I’m not sure it is the oxygen that is the limiting factor.  I can ride at 350 watts continuously, but it takes pretty much concentration and isn’t easy.

I’m sure I’ll be able to answer all of this, probably relatively soon.  It iced again last night and looks like it is going to be trainer weather thru the weekend.  I wish I had my shit together and could take off for a week and go somewhere warm to ride, but alas, I don’t, so I’m here for the duration.

Back to the sweaty pool training.  Think I’m going to do it twice again today.  A little over an hour at a time is all I can stand as of now. 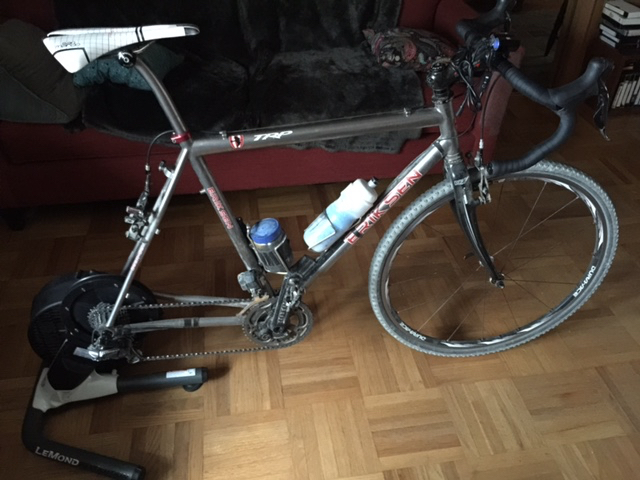 You might notice that I still have my light on my handlebars, just incase a night ride presents itself.

23 thoughts on “Riding a Trainer Part 2”