I was just reading an article at Velonews this morning and according to the review, the big “failure” of the new XTR trail group was that they don’t have a 42 tooth rear cog, thus makes it unacceptable for a 1x setup on a MTB.  I don’t get 1x.  Not at all.

The article says that 1x allows a wider range of gearing.  That is complete bullshit.  I hadn’t raced a MTB race in a really long time and happened to be out in Vail for the GoPro games this past summer, so I decided to ride the race on the spur of the moment.

I had a couple issues, but finally got into the top 15.  After the race, I was talking to a guy I was riding with at the end and he told me that he didn’t have enough gearing for the climb and he wished he would have put on a 30 in front instead of a 32.  I was riding 1998 XTR 9 speed, with a 34 in the back, but a 24 in the front and had no trouble climbing.

I remember Jimmy Mac telling me that the 1x setup doesn’t work for the weekend guy because of the same reason.  But, that might have been before the 42 rear cog and 10 tooth  small cog Sram has now.   But, I still don’t understand it.

I love front chainrings racing MTB.  I think it is awesome going hard into a climb, just a little overgeared, then just one shift in the front and be in the perfect gear for the start of the climb. Honestly, I don’t really understand getting rid of the granny gear in front.  I was riding a 24 x 40 up Powerline in Leadville.  I didn’t plan to be in that gear, but I didn’t plan to be all cramped up and barely moving.  If I would have had a 30 x 42, I would have been dead in the water for sure. The extra weight of having a 2nd, or 3rd chainring in front, then obviously a front derailleur and shifter, is well worth it in relation to have the options of having a wider selection of gearing.

Plus, who wants to be going and changing their chainrings for different riding?  I don’t.  I do a lot of MTB races that start out on pavement.  Races such as Chequamengon, Lutzen, Leadville, a lot of them.  And I’ve noticed that the rollouts are super tame compared to historical starts, not that I’ve done Leadville and Lutzen more than once.  But Chequamegon this year was much easier than the past.

I’ve ridden single rings in the front a lot.  My A bike in cross used to be one chainring in the front.  But on the starts, I’d be on my B bike with double rings and then switch once that initial start surge was over. But cross is completely different that racing MTB.  You might run into the situation where you need that other ring 3 or 4 hours into a race.  And you don’t know how you are going to be physically when you get there.

The biggest downside to all the different choices in front chainrings is how many different front derailleurs there are now.  I have 4 different Shimano front derailleur in boxes and none of them fit my MTB.  There are 2 and 3 chainring derailleurs, plus top pull, bottom pull and front pull, then low band and high band. They use shims so there aren’t so many clamp sizes, but still it is really hard figuring out what derailleur to order by the specifications.  And this isn’t really such a big downside, is it?

So, by now, I think you understand, I like the options that front chainrings offer, like 2 front chainrings, sometimes 3.  You’ll have a hard time convincing me otherwise. 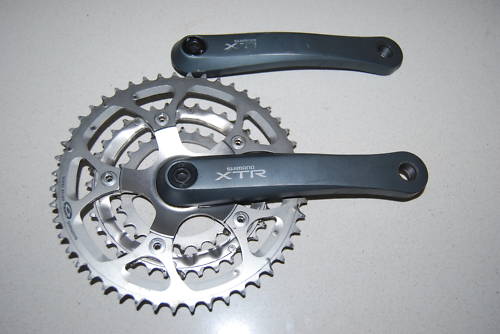 This was a great crankset.