On Saturday I raced the Hurtland Cross in downtown Tulsa Oklahoma.  I’ve raced cross a few times in Oklahoma, mainly in Tulsa.  And it can be all over the place, weather and courses.  I’ve raced mainly on dirt at 90’s and I’ve raced in 3 inches of frozen slush at below 32.  Saturday, it was great cross weather, 40’s and blustery.

The Hurtland race is carry over from the Tulsa Tough Criterium series.  I’m not sure what the brainstorm was to come up with the cross race, but they did a super job for their first cross race.  I believe they had over 300 riders in their event, which is pretty great for an Oklahoma cyclocross.

I raced both the masters and Elite races.  I usually only race Elite races, but felt I really need more time racing cross, plus there was super prize lists for all masters categories.  I sort of felt like a cherry picker, but I do qualify by age.  Anyway, I did progress in my “cyclocross comeback” by racing twice.

The early race was at 11:30.  It was in the lower 40’s and windy.  I didn’t really have the energy to warm up too much.  I rationalized this by saying the masters race was really warm up for the Elite race at 3, which was partially true.

The masters race went pretty good.  They was a $100 holeshot prize, which is more than winning a local race normally.  I won the holeshot and just kept the speed up.  Nothing really to report here other than I found it hard to ride easy, like not race pace, when I was racing, even though I was a long ways ahead and knew that I had another hour race to do soon.  I wonder why that is?  One notable thing was late in the race, I was coming up behind some guys and I’m not sure if it was a bug, or piece of leaf or what, but I inhaled something into my lungs, or maybe just my throat.  I coughed for the last half lap of the race and never seemed to dislodge the object. I still feel it in there, which is maybe just psychosomatic or scarring or something, but I’m still trying to get it out.

Anyway, I had a couple hours before the Elite race.  I went back to the van and took a nap in the sun.  I’m not sure if I actually slept, but when I got up about an hour before the race, I felt toasted.  Surprisingly so.  I was foggy in the head and tired.  But when I got on my bike, I felt pretty good pedaling.  I went over to the Brady district and had a double espresso and was ready to go.

I was lined up at the back of the 40+ guys at the start, plus I missed my pedal a couple times, so was buried turning onto the grass.  But I knew I had no chance to win.  Tristan Uhl, which was top ten in Louisville a couple weeks ago, was on form.  Plus, Jacob Lasley, Joseph Schmalz and a couple other guys that would be hard to hunt down from the back.

I had an okay race.  I wasn’t turning that well fast on chewed up grass for some reason, even though I was riding lots of tread on my front tire.  I was back in the 20’s after two laps, but started passing guys pretty steadily the next few laps.  I decided that I was just going to do my own race and not worry about racing other guys during the race.

So, I just kept passing guys and having them sit on for a while, only to hopefully disappear later. I finally got up to the top ten with a lap and a half to go.  But, by then, the guys ahead of me were pretty spread out.  I kept riding hard and had to do a little racing on the final lap, but still won a 3 up sprint for 9th.

I felt like I was sort of running out of juice the last couple laps, but when I looked at my lap times, my final laps of the last race was the fastest I did all day.  It is weird how I could be so off there.  My perception was that I was going slower.  Maybe it was because I had the course down better or something.

Tristan went on a won the race ahead of Skyler Mackey, KCCX and Jacob Lasley.  Joseph finished 4th and said his stair running was pitiful.  I was only 30 seconds out of 6th and I lost all that on the first lap.

Overall, it could have gone a lot worse.  I am not too crippled and got some skills back. Yesterday riding I was waxed.  I was still trying to cough up the “object” and felt pretty wasted.  This morning I feel a little better.  We’ll see tonight, on the Monday night ride.  I’ve been doing this the last couple weeks and it has been pretty steady fast each time.

I haven’t really looked into the future too much.  I know there is Jingle Cross and Ruts and Guts in two weeks.  I’m not sure what is going on this weekend after Thanksgiving.  Now that Masters Cyclocross Worlds are now going to be in San Jose two weeks after Nationals, I’m way more interested in the next couple months of cyclocross.  But, it is going to be hard to gauge what I really need to do to be going fast in January.  I’m already a little tweaked from the last couple years, so I have to be conservative and try to rein in my urge to race a ton, I think. 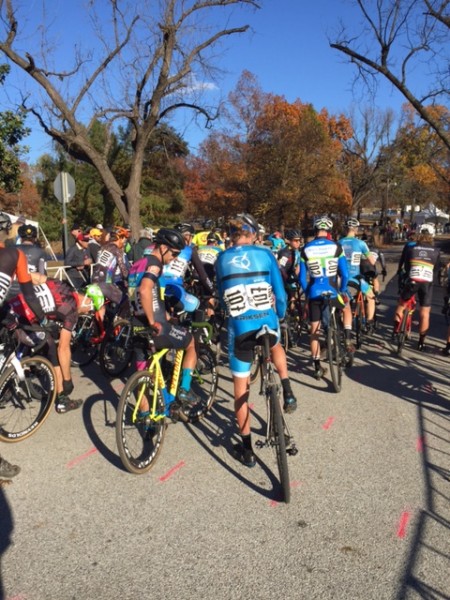 Could get too much further back at the start. 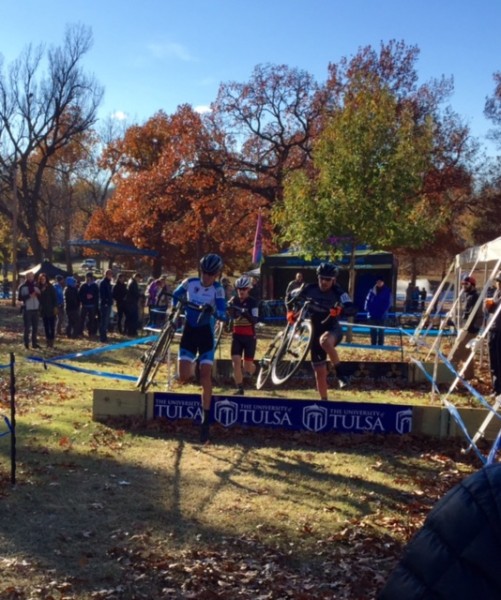 I was riding with my friend Matt Ankeny for a couple laps early, but Matt needed to rest a couple laps after starting super hard. 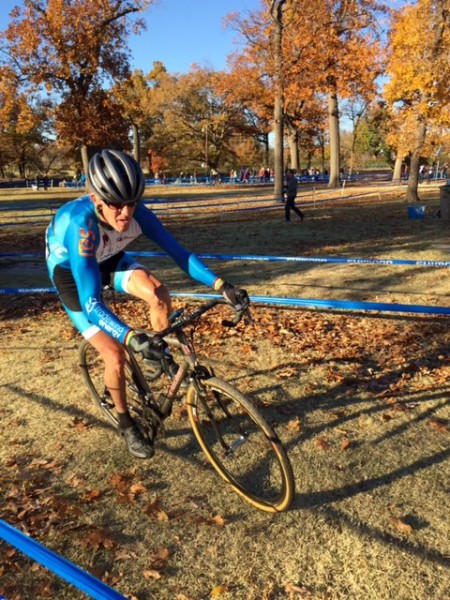 I was just trying to get better a most everything both races.