I just read an interview with Alberto Contador over at Cyclingnews.com.  The title of the interview was Contador: Without a doubt I have won nine Gran Tours.  He says that the 2010 Tour and 2011 Giro titles are his, even thou officially he was kicked out of those races for doping infractions.

Then he goes on and says –“With the system of anti-doping control we now have and the quantity of those tests for the top riders it is impossible to cheat. If you do it’s like a suicide. I’ve no doubt this is why it’s clean at the very highest level.”

Here’s the deal with his views.  If Alberto is so clean, never raced doped, was robbed of his Gran Tour titles by WADA and the UCI, why is he so knowledgable of doping?  Knowledgable enough to publicly make this statement.

If he has never taken or participated in doping in cycling, then why would he have any knowledge of if it is possible or impossible to cheat in cycling.  Since he is at the top level at the sport result-wise, does he think that he has a better knowledge of how to dope in sports than say, me or you?  Why would he?  He has never doped and really is uninterested in it, since in cycling, “it’s clean at the very highest level”.

I wonder if he’s read anything about Russian track and field last week?  I wonder if he thinks those guys thought it was impossible to cheat.  The track and field world governing body voted 22-1 to suspend all Russian athletes from competition.  This is how polluted that sport was.

But, in cycling, it is impossible to cheat and it would be “like a suicide” to do so. Personally, I think it takes some pretty bad luck to get caught.  Like in , Luca Paolini‘s case at the Tour this year, where he had to snort a nose full of cocaine to offset his Ambient haze, only to get caught in a random drug test when he finished.  I wonder if Alberto thinks this was unfair.   I wonder, like I do, if Alberto thinks about where Luca got cocaine to snort that day?  Was he carrying it around with him, just in cause something like this happened?  Luca did win the 2015 Gent–Wevelgem this year.  I wonder if Alberto thinks that race was won clean?

If Alberto know nothing about doping in cycling, he should hold his tongue because he is a bike racer and isn’t knowledgable enough to make a comment.  If he knows a ton about doping in cycling, then he would realize that it is possible to dope in sports and that he is just lying.  Either way, he should keep his mouth shut and not claim Gran Tour titles that are officially not his. 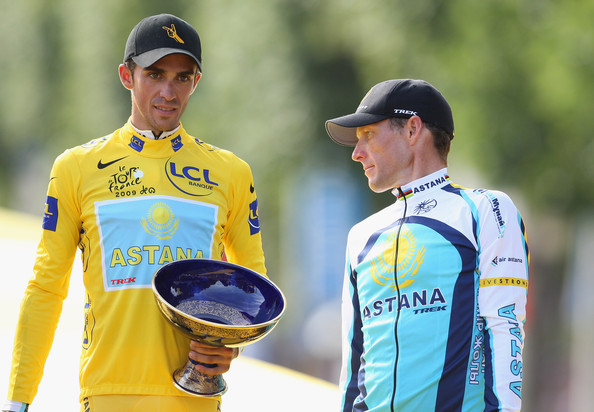 30 thoughts on “Contador Should Shut Up”