The above post title is accurate, but misleading in my view.  I am the 2015 Kansas State Cyclocross Champion, but I didn’t win the race yesterday.  Not even close.

Joseph Schmalz won the cyclocross states yesterday in Lawrence, but there is some obscure rule in the USAC rulebook that says that a D3 Pro can’t win an Elite state championship.  Since Joseph rides for the Hincapie Development Team, which is registered as a professional road team, he somehow disqualifies himself from being state champion.  Weird rule.  He is from Kansas and won the race, thus, in my opinion, is Kansas State Champion.

Whatever, it really doesn’t matter.  The race was fun, super competitive and had a super turnout.  There were a ton of really young kids, like kids on 24″ wheeled bikes, racing super fast. Each and every category had a pretty good field.  The Pro 1/2 field was probably the smallest with less than 20, but Kansas what was small quantity, the quality was pretty high.

The race was good.  I had an okay day, which surprised me.  I’m not familiar with my pre-cross sensations since I haven’t raced a cross race for 2 years.  Now I’ve done 3.  It might take a while understanding how I need to feel before such an intense effort begins.

I got to the race pretty early.  I wanted to spend the entire day at the race.  Watching my friends race and just soaking up the atmosphere.  I’m glad I made that decision.

Anyway, pre-riding, way early went badly.  I flatted a brand new front tire the first lap I rode.  I hate spending so much effort glueing on a new tire and having it flat so fast.   I didn’t feel that much better riding.  The course was long, nearly 2 miles, with lots of corners and off-camber sections that were tricky.  I wasn’t only physically feeling off, my handling skills were lacking too.

I did a lot of laps between races, but still wasn’t feeling it.  About an hour before the race, I went to the get some coffee and when I had finished that, I felt way better for some unexplainable reason.  Physically and mentally it was like I was on a different level.  That was weird.  Good weird, but still weird for me.

So,I was okay for the race.  I screwed up the start and missed my pedal more than once and was buried coming off the start concrete.  I was 10 guys back and it was hard moving up quickly because the course was tight.  My team mate, Benn Stover got the hole shot and he can go pretty quick for a lap or two.  Joseph and Shadd Smith, who had just finished 2nd both days in Louisville in his Master’s race, was up there.  I was hoping those guys didn’t separate themselves before I got up to the front.

I slowly got up there, pretty much right after Joseph had jumped away from the group.   Shadd kept the pressure on and seemed to be keeping Joseph in check.  But Joseph had a flat and was just trying to get to the pit. He got to the pit in the lead, but came back out at the end of the large group.

And the group was big.  At the time it was 7 guys.  Me, Joseph, Shadd, my team mates Brian Jesen and Garrick Valverde, plus Briton Kusiak and Aaron Ewell.  All pretty good cross racers that seemed to be going pretty well.  The course was tight enough to keep it tight.  Plus, the wind played a big part, blowing for the south at one 30 mph.  There were a couple long stretches on grass, plus the long pavement section, that went directly into the headwind.  This made the race way more tactical.

Joseph didn’t hang around long, maybe another lap.  He jumped from the front and I stayed with him maybe a minute and was way over my limit.  His jump split the group up, but I wasn’t too far ahead of Shadd and company, so we were back together soon.

Then it became interesting.  There were 5 of us left.  Garrick put in a super fast lap and I jumped up to him, but Shadd got us too pretty quickly.  And this is how it kept going.  Brian and Britton would yo-yo off the back and we attached each other.  I kept a lookout for Brian, and tried to slow the field down so he could get back on.  Each time he put in a good attack, which softened Shadd up a tad each time.

Coming into the final lap, there were still 5 of us.  Brian hit the pavement first and jumped hard. Shadd was right on him, but I was gapped a little.  Luckily for me, Brian looked back and saw that I wasn’t connected and sat up.   I had a good head of steam going and just went right by the group when we hit the grass.  Brian was at the front still and I was pretty sure he would get to the next corner behind me.

That was enough for me to separate myself and then we just raced.  Shadd was on his own.  Then Garrick behind him, then Britton and Brian.  I felt pretty good the last lap.  Like I said above, it was a long lap, over 7 minutes, so I monitored my efforts.  There were just enough off-camber, tricky sections to get some rest.

I came in just a few seconds ahead of Shadd, probably close to a minute behind Joseph, but that is just a guess.  The best rider won, for sure, but the next places could have gone many different directions.  It was fun racing.  I didn’t see anyone fall, which is surprising considering the course.

It was blustery at the finish, the temperature having dropped some.  Everyone was in pretty good spirits.  I had missed the unique camaraderie that is a staple of cyclocross.

We all got together after, did the awards and headed over to FreeState Brewery to have dinner.  The TradeWind cross guys are pretty fun.  Some pretty good, enthusiastic young guys in Ben Stover and Garrick Valverde, plus Brian, Matt and I.  Joseph came too.  Pretty tight-knit group.  Pretty good day.

Catherine did her first cross race in 3 years.  She was great.  She rode the master’s women and was in a dual the whole way.  She finally got into the lead on the final lap and won at the end.  She was relieved I think.  There is so much apprehension involved in athletics when you’ve been out of it for a while.  It was a good start for her.  She had to jump in the car, head to the airport and fly to Seattle to work this week.  Pretty full meal deal day for her.

I feel pretty good about yesterday.  I did some high speed dismounts, which worried me.  I was going okay, not super, but not bad. I am not crippled today.   I have more confidence, which is always important, especially in cyclocross.  It’s going to be slow and the relearning process is going to be interesting.  I haven’t seen any mud yet, no ice or snow.  You have to have so many skills in the sport, it is crazy.

Next weekend, there are a couple races in Oklahoma.  The race on Saturday has 2K to win.  The total prize list is $15,000.  I think I’m going to go there and take a couple more baby steps. 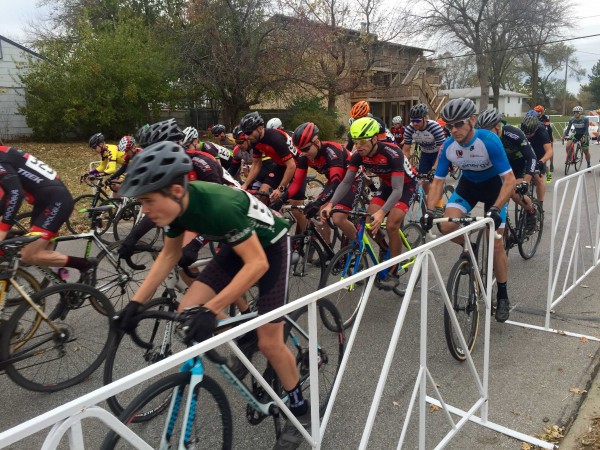 The start of the 3’s race. Matt is breathing out of his nose. The kid ahead of him in the green I heard is 16 and is tearing it up in cross and off-road MTB. 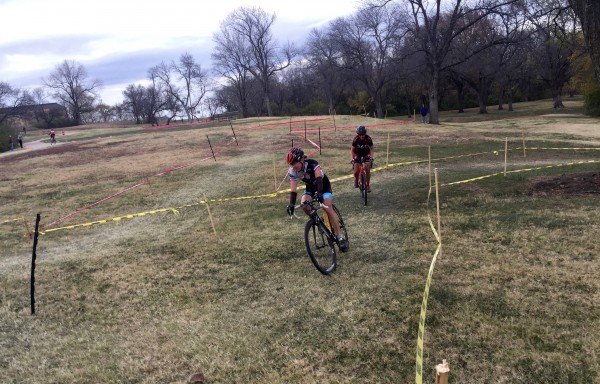 Catherine leading on the last lap. 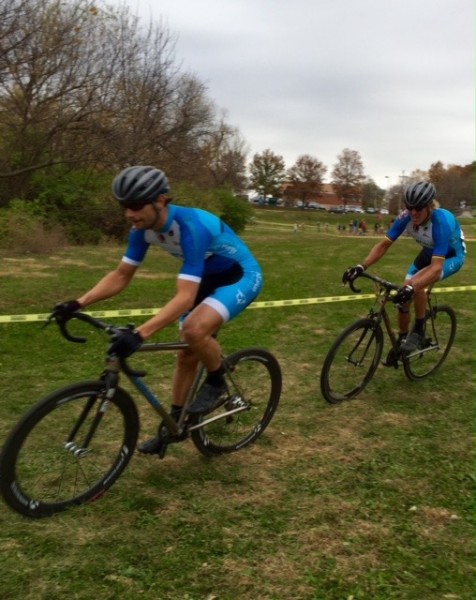 Brian and me going hard. 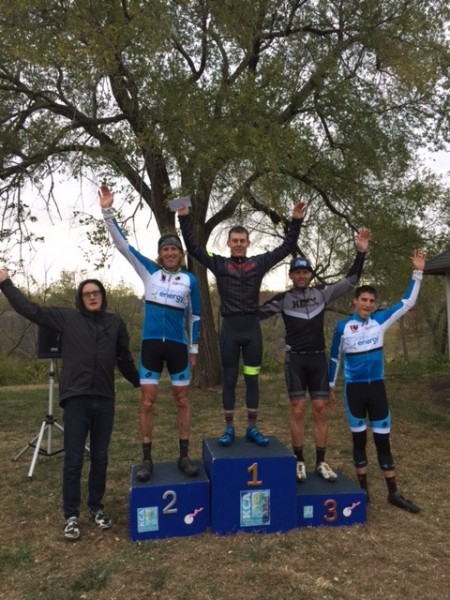 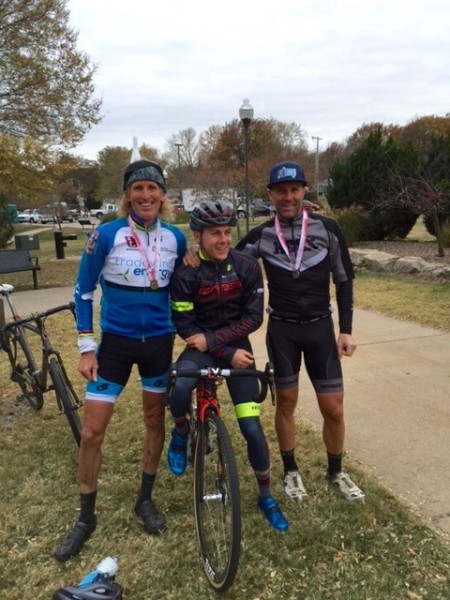 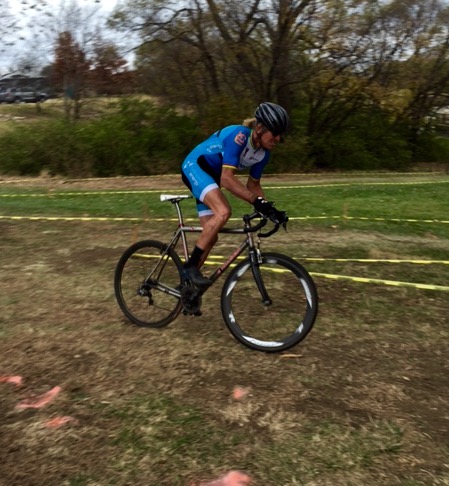 On the last lap.