Driving 10 hours yesterday I had a bunch of time to think about last weekend in Louisville.  I decided I probably should have started my return to cyclocross racing at a local event rather than racing against the best guys in the country, starting at the back.  It is not good for my mental health getting throttled that badly two days in a row.

The carnage at the back of the fields in those races is crazy.  It isn’t really anyone’s particular fault.  There are just a lot of riders and not that much space.  The Saturday night race was stupid the first couple hundred meters on the grass.  A pile up in the first corner, then again just a bit later in the dark mud pit.  I kind of missed all that, other than losing a buckle on one of my shoes, but still, the distance you lose there is terrible.

My running stinks.  I wouldn’t even call it running.  But, two out of three run ups on the course were pretty steep, with big steps, and that is the worst for my broken hip.  I am pleasantly surprised that my hip seems good from the weekend, even though it was twisted around on Sunday when my foot got stuck in Jacob’s front wheel.

I wasn’t riding that badly.  I wasn’t going great, but I wasn’t gasping for air or anything like that.  My bike handling skills were subpar though.  Those will get better.

I can’t believe how many guys were riding disc brakes.  I guess that is the direction the sport has gone and it isn’t reversing.  It seems like a hassle to me, but I’m old school in a lot of ways of the sport.  Removing rotors to fly, or just to pack wheels into the back of a car is going to suck.  Or just having cross specific wheels, training and race, is a big issue to most riders.

Anyway, I felt okay yesterday.  My right knee got pretty twisted on Sunday and it is aching some, but nothing serious.  I got back a little after 5 pm, and my brother had organized a gravel night time ride at 5:30, so I had to rush.  I only had to put bottle cages and light on my cross bike and was in business.

Riding at night, especially on narrow trails, (we started on a bike path), seems super fast.  It was way colder than I had expected.  It was in the lower 60’s when I got back, but was in the lower 50’s as soon as the sun set.  I had bare legs and never really got warm.

I sort of felt like riding harder, maybe pent-up frustration from the weekend, I don’t know, but whatever the reason, I ended up pulling most the whole way.  It seemed so late, but even after a couple mechanicals and riding two hours we got back before 8.  Man, it sure is dark then.

Anyway, I’m not sure what I’m doing now.  I have to work on my van some.  I’m thinking I need a new fuel pump and the transmission is okay.  At least that is my thoughts now.  The problem with this is that auto repair involves use of thumbs, which I am short of one.  My right one, which is worse.  I can probably get by, but we’ll see. 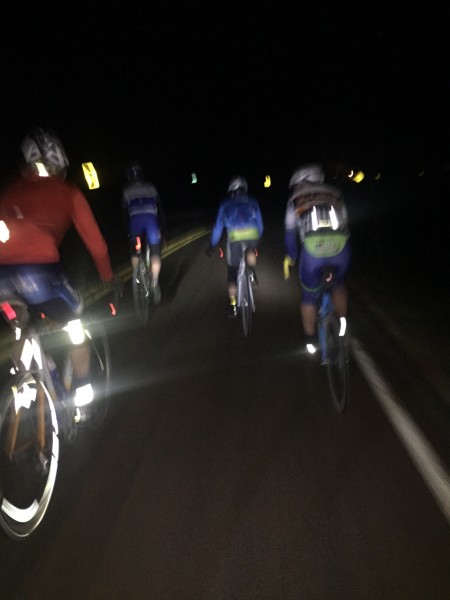 The sensations of riding at night are great. 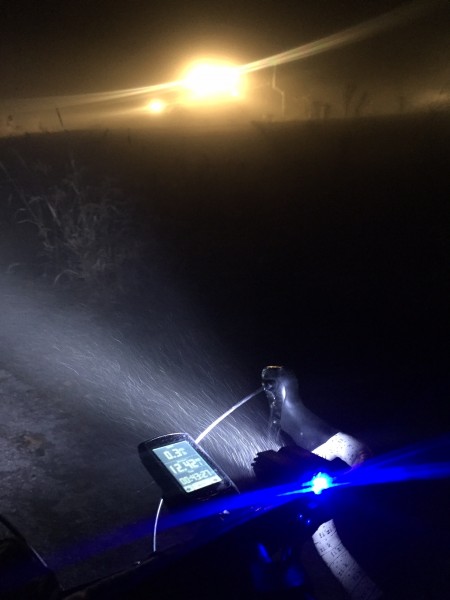 They were harvesting a lot last night. I didn’t realize how much stuff goes into the air when they do this. Probably the reason for the great fall sunsets.