I’ve been laying low this past week trying to catch up on stuff and doing odd projects.  I’ve been doing some car work, assembling a new dual suspension bike and riding some.

I have no idea, once again, of my form.  Yesterday, on the club ride, we did a little effort at the end and I felt pretty good, but just when we were winding it up, a car pull out in front of us and was creeping along at 30, so we had to easy up.  I hate it when that happens.

I’ve been meaning to go jog some, but haven’t really tried it.  I think I’m worry about the outcome.  My left leg, broken hip side, is iffy at best.  It’s the muscles, not the bone.  At least that is my diagnosis.   Maybe after the ride today I’ll try a short stint.

Last night we rode to downtown Topeka and listened to some live music and ate dinner from mobile trailer dinners.  Keith and Catherine got a little behind shampooing Catherine’s mother’s carpet, so we didn’t get there to close to 9.  I was hungry.  There were a lot of people, all had brought their own folding chairs to watch.  We just sat on the concrete, a little away from the music, ate and had a beer.  It was a super night, in the mid 60’s, no bugs, so it was great.

I’m hoping to get this dual suspension bike together soon.  I’m only missing a rear brake.  The XTR one on my hardtail hydraulic line is too short or I’d just take that one off and use it.  I hate taking bikes apart to assemble other bikes.  It seems like that is my life though.  I think I might have to raid my prize box and put on an Avid brake I won at Leadville.  I’m not sure if the rear XTR brakes were back ordered or what, but I doubt one is going to show up soon enough for my liking.

Okay, today is going to be another Indian summer day, even though we haven’t had a killing frost yet.  And that doesn’t seem to be in the forecast anytime soon.  It is supposed to be nearly 90 today.

I think I’ll carry a bottle of itsthenerve with me today.   A couple days ago, when it was close to this hot, I was feeling a little crampy.  Today might be the perfect day for on-the-bike testing.  I’ll make sure I have something to chase it will.  The product is cinammon, ginger and capisum. It is very hot and somewhat upsetting to my stomach.  But, it is something I hope to be able to get used to.  I see that they are advertising at Velonews.com.  I guess they are already targeting the cycling crowd.

Okay, I’ve made an executive decision and am going to put that brake on this morning.  I like Sunday mornings.  We not riding until noon, so it should be hot. 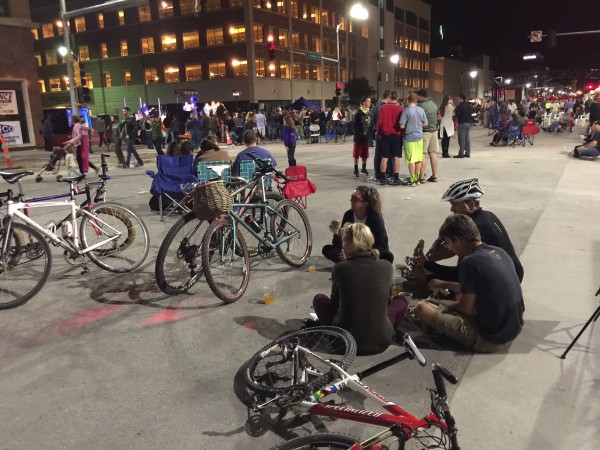 Sitting around at 9th and Kansas last night. 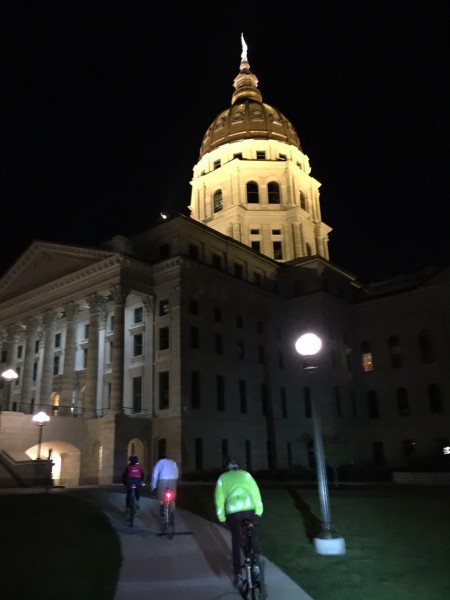 This is a photo that a friend, Jeff Jacobsen, took a couple weeks ago of the blood moon. I think it is great.