I’ve never censored any comment here on my blog.  The comment section is a forum for whoever agrees, disagrees or just has something to say about whatever I post.   Or really, about anything they want.  I do trash the spam comments I receive, but if there is a comment that has something to do with the sport, or whatever the subject is written, then it stays.

A lot of the comments are pretty out there.  They can be very crude and mean.  But, I figure personal attacks are just part of life, so if that is what drives a person, then that is how it is.

But, I needed to change that yesterday.  A guy signed in under Inga Thompson’s name and posted a comment.  Inga is a friend of mine and posts comments herself every so often.  It wasn’t right that this person was using her name to state his/her opinions.  After I deleted the comment, someone else had commented and I posted that it wasn’t Inga.  Then again, yesterday morning, the person reposted the comment under Inga’s name.  I deleted it once again.

I’ve been thinking about it for a day now and have decided that I’m going to block the person for leaving comments.  Or maybe even accessing the site.  I’m not really sure how to do this, but I’m going to figure it out.

This person, who I assume is a guy, so I’ll call him a guy, uses lots of different user names.  Jim Ochowicz, Ian Stevic, Gwen, Francisco Mancebo, Dave Le Duc, etc.  I think I counted 12 or 13 different user names that he has used the last couple months.

I had let the other pseudonym comments slide.  I figured that most people were smart enough to figure out for themselves that Ivan Stevic and Dave Leduc, Och, and the others weren’t leaving comments on my site.

Initially he was posting comments as jt.  I went back and looked at his early comments and they were pretty informative, but sort of snarky.  I liked them.  But, as the years went on, he started posting under more and more names and leaving less informative and just more hateful stuff. It is weird looking at the evolution of his comments.  I wonder what happened to the guy.  I guess his opinion of me or my thoughts must have morphed.

In July, I sent jt an email and told him he was stepping over the line sometimes and he wrote back.  Maybe he felt uncomfortable because this is when he started using a pseudonym email address  – Leducroofingand doping.com.

I just looked it up and he has left over 400 comments the last 4 years.  He does have a pretty good knowledge of the sport of cycling, but for some reason, isn’t using that knowledge in a positive way.

In the email I told him I would be happy to come out to the East coast and do an interview with him and let him express his opinions to “my forum”. He replied, “dude, not your best moment…”

Anyway, I’m not going to make a habit of doing this.  Censorship, for me, is a chickenshit way to limit the exchange of knowledge.  It’s not up to me to filter the thoughts of others, especially thoughts created by something I write.

I feel a little badly about doing this.  Obviously, the guy is a bit obsessed with my site.  But, he can look at it this way – It will free up a big chunk of his time not having to sign in and complain about my thoughts.  He must be coming here multiple times a day.

So, this is a one up thing.  If jt wants to discuss this in person, he can just let me know.  He has my email and phone number.  If not, sorry, but you stepped over the imaginary acceptable line, so you don’t get to play anymore. 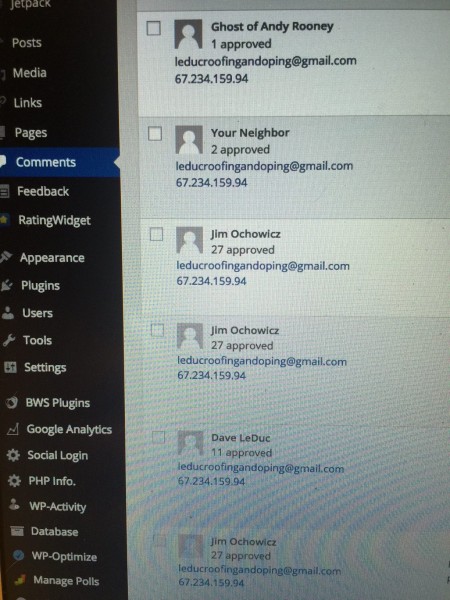