Modern professional cycling teams have taken themselves pretty seriously ever since Lance put together his dedicated Tour de France squads and they rode unselfishly for him year after year. This practice spread like a plague throughout the peloton and now it is common for all professional teams to be structured off this format.  But, is it healthy for the sport and does it really work in anything other than stage races?

I think I can make a fair argument that the whole practice is often a waste of time and energy, plus bad for everyone involved.   Plus, it only works out for the team that wins the event.  Each and everyone of the teams that doesn’t win a race, which is everyone but one team, loses. Thus, their plan was flawed, they didn’t execute it correctly, or they just weren’t good enough to win.   I can argue that many of the common tactics that professional teams use are actually harmful to their chances of winning and it makes the sport way more dangerous for all involved.

First let’s address the practice of riding in team formation when in the peloton.  I don’t understand it all.  I’ve posted about this before.  Trying to follow one guy’s wheel the whole race takes a ton of energy.  Why fight for position the whole race when really it is not important? Plus, with all teams trying to ride at the front of the field, there isn’t enough room on the road, so way more crashes occur.  This is a fact.  Guys fighting for position and the peloton edge to edge on the road is when people hit the concrete the most.

What happened to the tactic of putting a couple guys of lots of teams at the front, when they have the same motivation and tactics.  Why do all 9 guys have to be up there at a time?  It is ridiculous at times.

Then the practice of working for only one rider.  I could give you a million examples of when this backfires race after race.  But, let’s just use one example, the race on Sunday, the World Road Championships in RIchmond.

Here is Peter Sagan, racing with his brother and one other guy from Solvakia, so really no team at all.  They didn’t control anything, never rode in the wind.  Peter seemed to stay in pretty good position most of the race, from what I could see.

And all these other countries with 9 riders, rode in formation, working for, what I guess, seemed like a field sprint.  André Greipel was even at the front drilling it, for what.  He is pretty much a pure sprinter.  He did his big pull and then sat up.  Holland, Poland, the Belgian guys, they were all working as a team and who won, the individual, Peter Sagan.  You might say that is a fluke, but it really wasn’t.  I actually picked the exact place the solo attack was going to occur.  It wasn’t my rider, but that is irrelevant.   It could have been any number of individual guys.

Peter Sagan didn’t luck into being World Champion on Sunday.  The way these “professional riders” were treating the race was the same they treat them the whole season.  They love to sacrifice themselves, doing huge pulls at the front,  then peel off and let someone else try to win.  But on Sunday, at the end, there were just a bunch of individual riders with no one left to chase down Peter.

Okay, let’s forget the Worlds this year and address American criterium racing.  UHC has dominated this for years.  That is until guys starting figuring out the boring ass tactic of taking over the front the last 15 minutes.  Look how it worked out for them in the 4 NCC races in St. Louis over Labor Day.  They had arguably 5 of the best 6 riders in the races and Daniel Holloway won the series overall. Daniel has won 25 races this year and is, by far, the best criterium rider in the country.  And his Alto Velo team is good, but really not on the same level as UHC.  He pretty much does it alone at the end.

Or maybe a better example, Pro Criterium Nationals.  UHC doing their slow leadout and Eric Marcotte comes over the top of them and solos to the win.  One guy doing it virtually on his own,  beating a whole team.  It happens all the time.

Of course there are lots of examples of teams having incredible results working together.  There is no question that having a cohesive team of strong riders increases the chances of any one team in the race.  But it doesn’t have to be the only “tactic” to be successful in the sport. Weaker teams with smarter guys win races.  Individuals obvious win races.

Modern cycling is now thought of as a team sport.  Most of the riders have that drilled into their brains.  They are fighting each other to go back to get bottles.  All for one.

But a cycling team is really a collection of individuals.  It is really an individual sport where team work increases each teans/riders chances to win on a seasonal basis.  But, that isn’t the way the teams look at it.  They use the  – put all their eggs in one basket tactic.  That isn’t the only tactics that are “team tactics”.

I’m not saying that we should completely disregard the value of team tactics in the sport.  I’m saying that if more riders thought more about their individual aspirations, and their team managers thought the same way and allowed their riders to act on them, then the sport of be more exciting, safer and generally better.

Cycling is a very beautiful sport.  It is visually attractive.  Very dynamic when viewed in person. This riding in formation and riders not allowing the natural flow of the race isn’t good for anyone involved.

Okay, feel free to comment or let me have it on the comment section.  I’m going to be driving all day, so it will be a good way to pass the time. 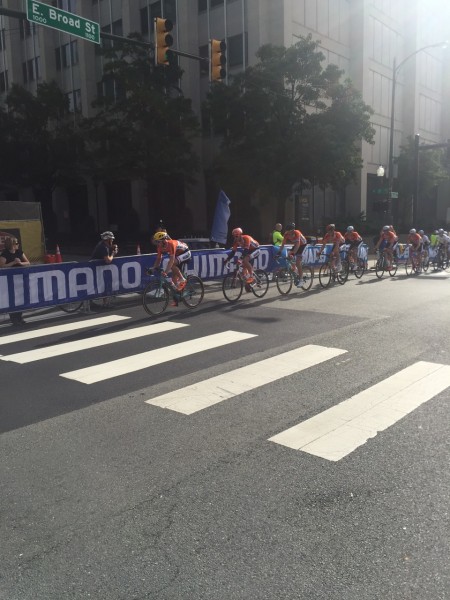 I think this was either the full 1st lap or 2nd lap of the race. There were 16 laps. The whole Dutch team at the front riding. For who or what? 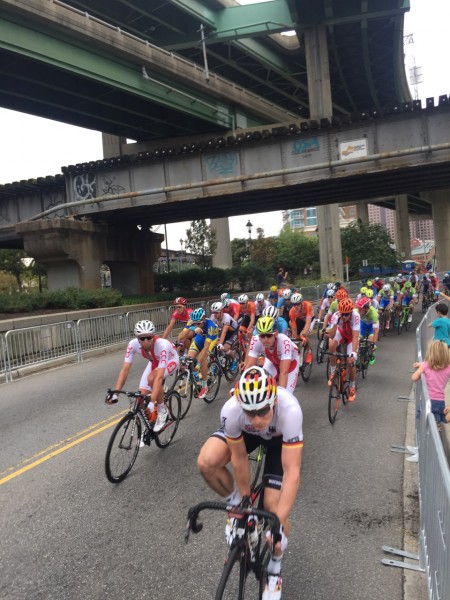 André taking a last drink before pulling half a lap and then quitting. Exactly how I would use a sprinter at the “flat” Worlds.

I wonder who ended up with Peter’s helmet and glasses.  Pretty happy folks I assume.