I was walking around Richmond late last night, soaking up the city, and was listening to the various people talk about the race and just generally enjoying the atmosphere.  There were tons of foreigners walking around, so I can’t really comment on what they were saying.  But, the Americans I can.

I was over on Carey Street having dinner, and after we went to a local homemade ice cream store.  Trudi was driving the BMC car and it was parked out front.  We were sitting on some chairs, on the sidewalk when a couple guys came walking by.   One was smoking and the other was frumpy looking.  Anyway, they both look at the car, then the guy smoking says, “I wonder if Taylor Phinney is in there getting ice cream?”  Then they proceed to go to the window beside me and peer inside looking for Taylor.  It was really surprising that they were bike race fans.

Then later in the evening, Trudi and I went outside looking for the blood moon eclipse, but it was cloudy.  Anyway, I saw two police officers walking on the street and I asked one if, by chance, he knew where the moon would be.  The guy looked at me like I was screwing with him. I told him the moon deal and he said it was probably too cloudy.  I agreed.

Right then another officer walked up and the first guy said to the new guy, “I’m tempted to go over to the finish line and rip up that UCI banner stuck on the ground and put it on eBay to sell to some Slovakian dude.” I told him I would buy it from him if he did that.  He said,, “Let’s go and get that fucker, I’m serious.”  I should have, but kept looking for the moon.

It really was too cloudy, so we went back upstairs to our room.  Looking down at the start/finish area, I noticed that the UCI Worlds banner that was stuck to the road was now gone.  The cop had taken it.  I was, once again surprised.  2nd time in one night.

Anyway, yesterday was very enjoyable.  There is something to be said about spectating a 6 1/2hr bike race.  I had a chance to meet up with a ton of old friends, etc.  Plus time to go to lots of different parts of the course to view.  Cycling is a wonderful visual sport to watch.  I think the local residents of Richmond found that out first hand.

My picks from yesterday didn’t pan out.  I was close with Stybar attacking on Libby Hill and the Van Avermaet going on 23rd.  But, Sagan went right over him at the top and then did that tuck. The cameras only showed Sagan and I said to Trudi that Van Avermaet was never going to catch him since Sagan did a couple pedal strokes.  That tuck is really screwy and dangerous, but it is faster than shit.  I’m not saying that Peter Sagan won the race because of the tuck, but that might be the case.

Anyway, I wasn’t that far off.  I did state that a solo rider would go after the 23rd street hill and solo to the finish.  But, I think Sagan would have to be classified as a favorite, not as an underdog.  And he did seemed to have pretty great legs.

The US team rode great.  Animated and in contention until the very end.  I talked to Tyler Farrar after the race.  I asked him about his last lap move.  He said that he didn’t think he had the legs to be able to get over Libby Hill in good enough position to be able to have a result, so he did the early move, hoping to be over the top before getting caught.  He thought he was good enough for 23rd street and the finish hill.  It nearly worked out.  I have to applaud his effort.

Finishing two riders in the top 20 is about as good as the US should expect doing.  They only started with 6 riders and Ben King, then Taylor both did huge breakaway efforts.  I was initially joking that maybe Ben King thought the race was a points race because he pulled across the start/finish line first for lap after lap. The field was nervous or his group would have been out there many more laps.  They were on a short leash.

My buddy Ivan Stevic was in Ben King’s moves early.  He stayed there for a few hours and finally got spit out the back on his own.  Then he proceeded to take bows and make gestures  as he was quitting race. I’ve never seen that before.   It wasn’t like he was on a 5 hour solo break. He was one of 5 guys and got dropped from them.   Dick.

The rain held off the whole day, which was mildly surprising.  They did change the forecast during the night, but walking around, every once in a while, it started spitting down rain, even when it was partially sunny.  Everyone lucked out in this regard.  The race would have been completely different with just one lap of rain.

I felt sort of weird when the race was over yesterday.  I felt the same way as watching the Cyclo-X Nationals a couple years ago.  There is so much energy and anticipation, then someone wins and everyone just disperses.   It seems sort of anticlimactic.  I don’t know why I get those feelings.

Anyway, lots of stuff to do today.  Drive bikes to the Washington D.C.  airport.  Take cars to be transported back to California, etc.  I don’t have any clean clothes left, so I need to do laundry. We’re going to start driving back home tomorrow sometime.  It might be a serpentine route, but I haven’t gotten that far yet. 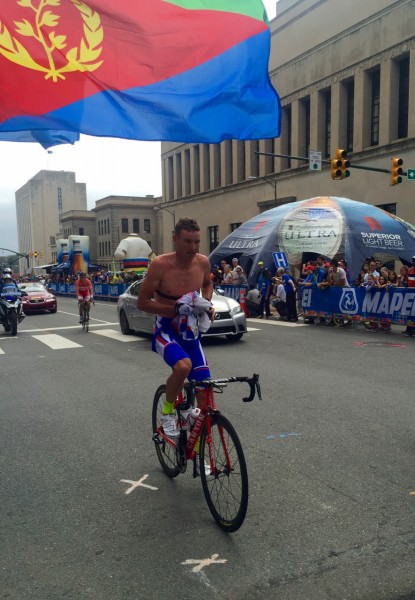 Early in the race, I guess he wore one too many layers. 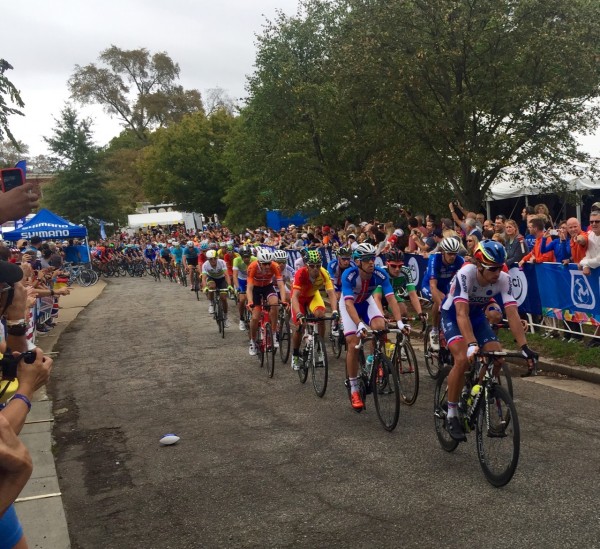 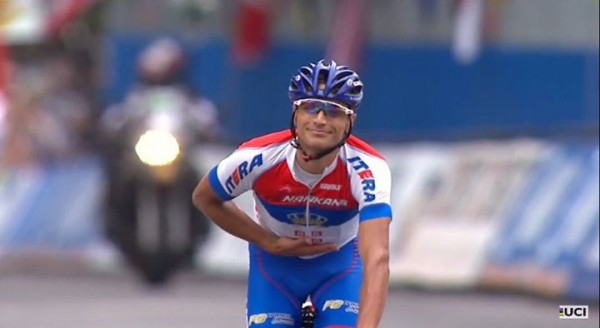 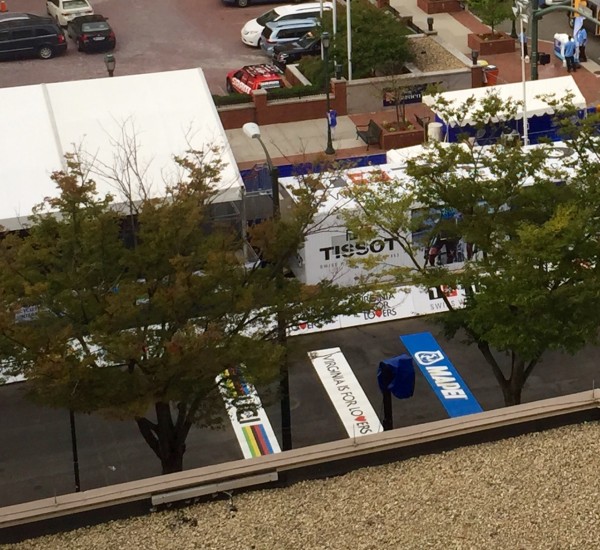 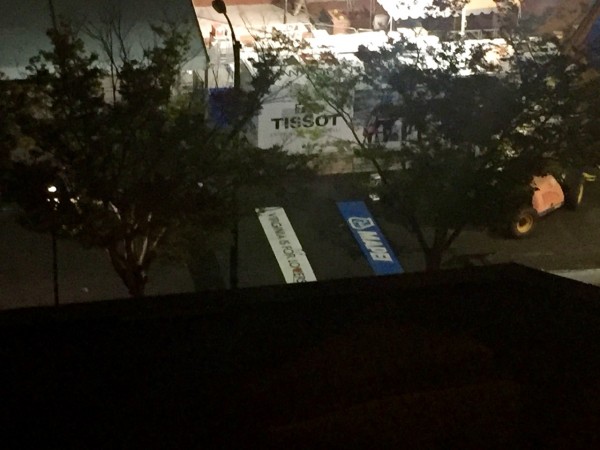 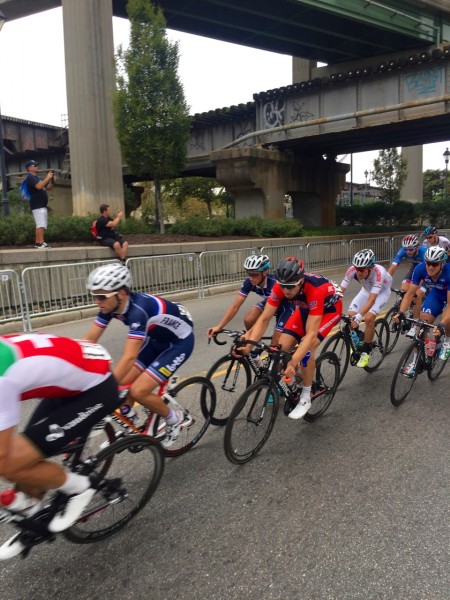 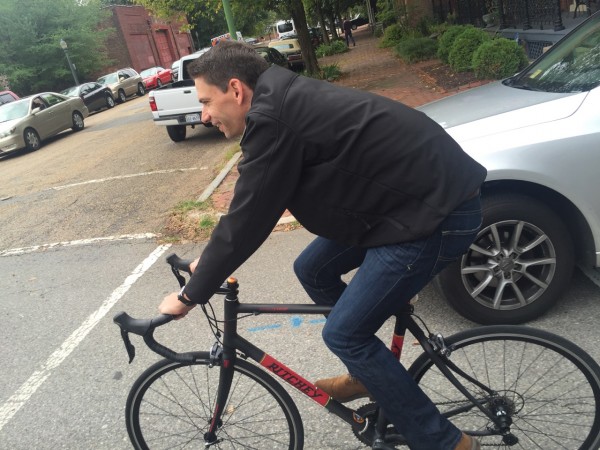 CEO of USAC riding across town on a carbon Ritchey Breakaway bike. 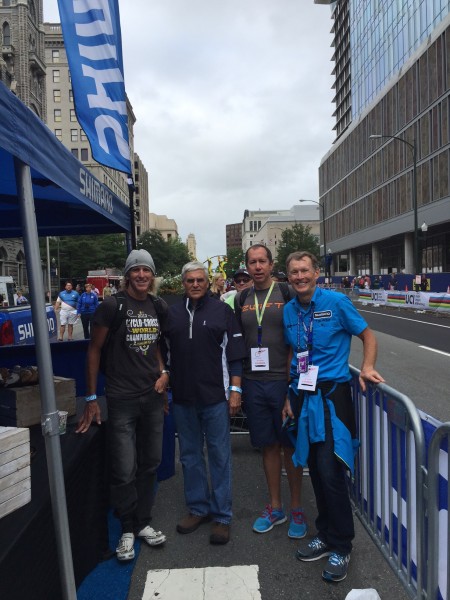 This is me, General George Casey, Mike McCarthy and Wayne Stetina. I know Mike and Wayne, but not General Casey. He is an avid cyclist and does the Ride 2 Recovery events with Wayne. 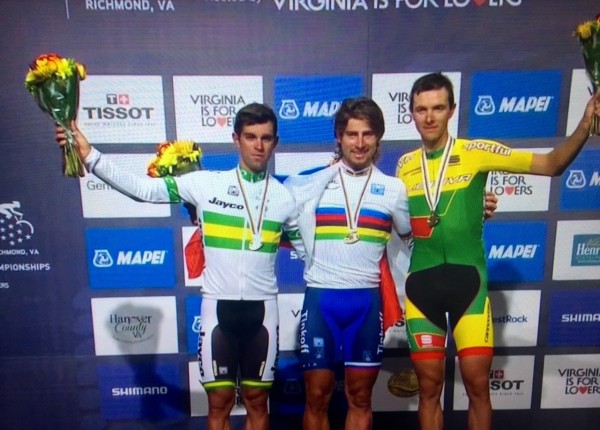