The Elite Men’s Road Race Worlds starts this morning at 9 am EST.  It is a long race, 6 hours, so it is going to be a long day.  There is some chance of rain most of that time, so you’d think the course is going to be wet at least some of the time, which will make for hard bike racing.

I have to assume that it is going to be wet alittle, but maybe not at the end of the race.  Mid afternoon it shows that there is 0% chance of rain around finish time.

It is super hard making picks on a single day of bicycling racing.  You’d have to think that one of the teams with a full squad of 9 riders has a much higher chance of winning than that of other countries, such as the US with 6.  But, if it rains, I think those odds are less, since racing in the rain isn’t really a team event.

If I have to make a pick, I think I’d have to go with Stybar to win the race.  But, in reality, I think an underdog rider is going to surprise and win the race.  The last 4 kilometers, from the 23rd street climb, are very tricky and a solo rider, that has super legs, can hold off the field to the finish and I think that will happen.  I think it might come down to the weather.  If I get a 2nd pick, then Greg Van Avermaet.  These hills aren’t enough to shake him and he has shown he can go up short hill, at the finish of a race, about as good as anyone currently riding.

The US women had a stellar day yesterday.  Winning the bronze medal was a victory.  I don’t think the US has won a medal Elite women’s medal since the early 90’s, so this Worlds has been a super success adding in the medals the junior women and men have already secured.  Plus, BMC is a US registered Pro team, so I guess you can chalk the TTT up as an American win too.

I did a couple hour ride out in the countryside yesterday during the women’s race.  There is so much Civil War history around here that nearly every kilometer there is a history marker with the date and battle stated.  It is a little creepy thinking about people shooting other people nearby, even it was 150 years ago.  I stopped at a cemetery and checked out some of the grave markers.   It seems so long ago, but really just a few generations of our ancestors.

Back to the race, I think that Taylor Phinney will have a good race.  Hopefully be there at the end and in the mix.  That might be asking too much too early, but he has the genetics and it just depends on the day.  Hopefully tomorrow will be his day, since it might be a long time, if ever, he gets this chance again.  I think that it is amazing that he is even riding this race, so all this is just frosting on his cake.

Okay, however it turns out, it should be a great day of bicycle racing.  There are plenty of places to view live.  There is an app for your phone, Richmond2015, which has a live feed.  I think it might be live on CNBC too. 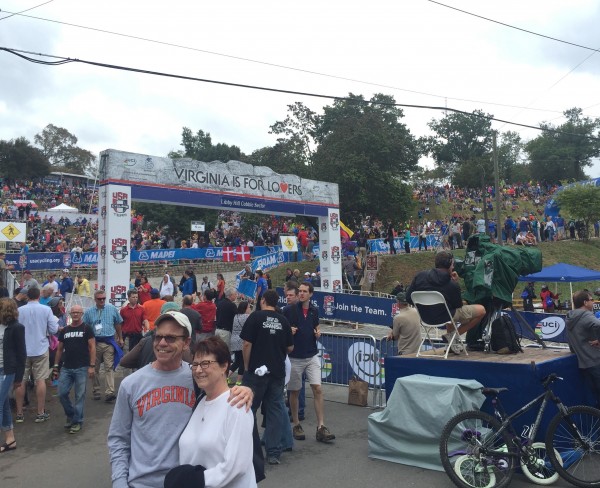 Libby Hill was hopping yesterday during the women’s race. It is probably the best place to just camp out the whole day. 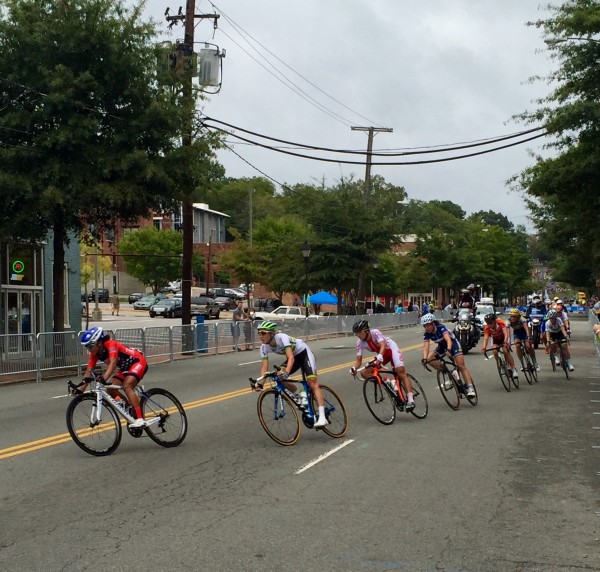 Coryn Rivera leading the break towards the 23rd street cobble climb with 1 1/2 lap to go. This break got caught with about 5 km to go. 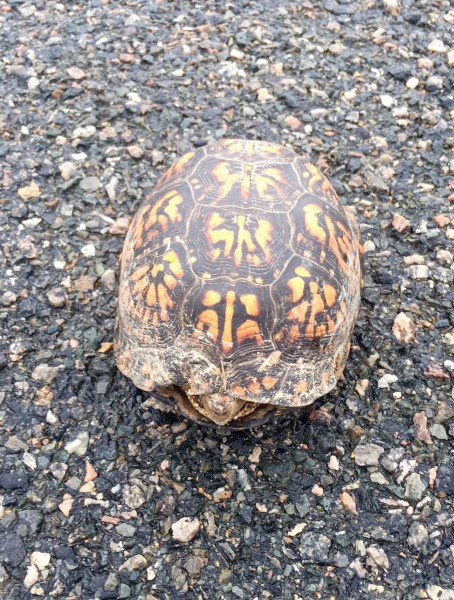 I found this box turtle out riding. I’ve never seen a box turtle with orange markings. In Kansas, they are greeen and yellow. 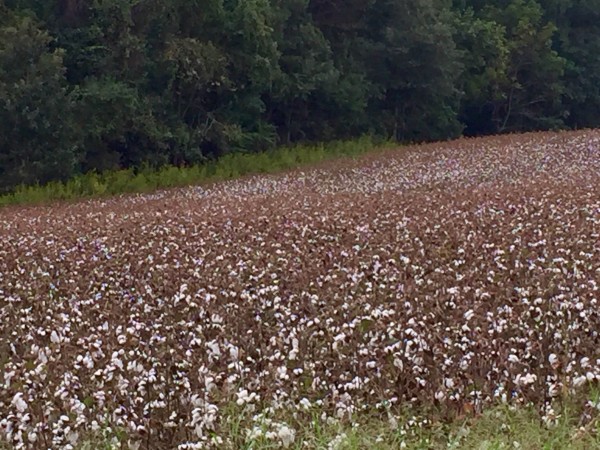 It is strange riding around cotton fields. Looks like it is just about time to pick it. 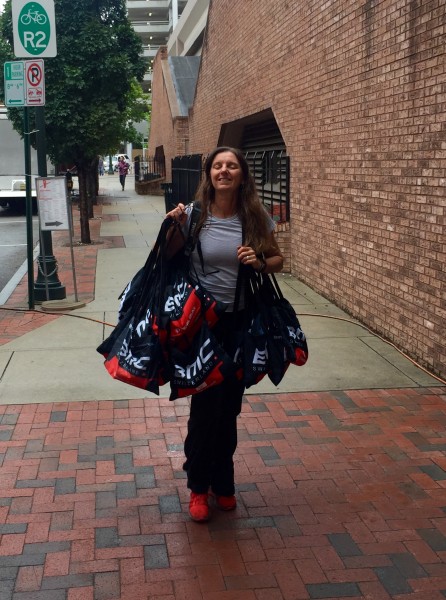 Trudi with a bunch of musettes yesterday morning. 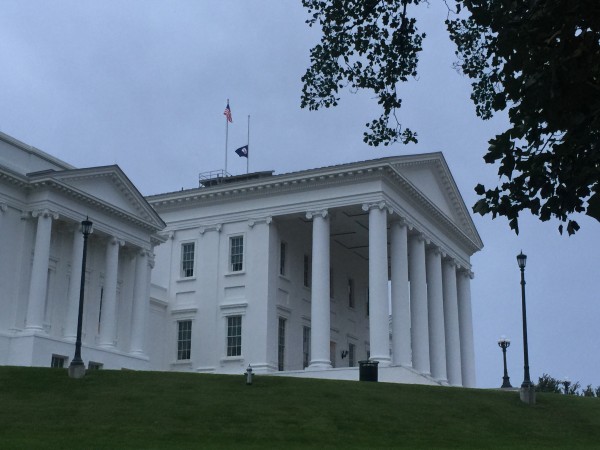 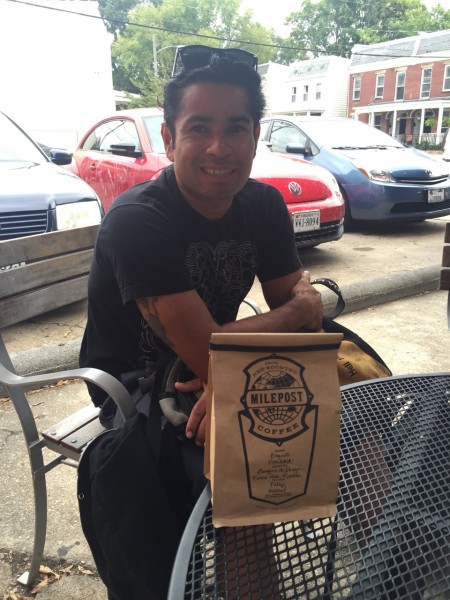 I’m meeting lots of guys I should know, but don’t. And, of course, new friends should bear gifts. 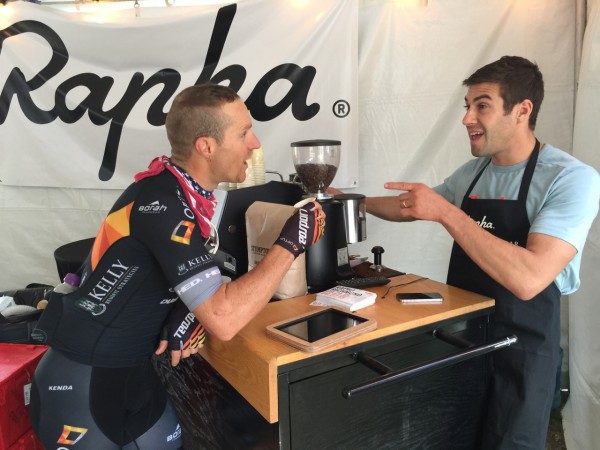 I met up with Brad Huff out riding a couple days ago. Brad “bought” me a coffee when we got back from Richmond.