I’m not trained for this bike racing spectating.  It has really only been 3 days and I’m hurt.  There seems to be a ton of walking, standing and talking involved in this endeavor.  I’ve been getting out on my bike for at least a couple hours every morning, late, but that doesn’t seem to help.  By the time I’m back, usually close to midnight, my legs are throbbing.

That being said, it is super fun.  I have run into tons of people I haven’t seen in decades. Yesterday I saw Eddie B., John Trotter, a guy I used to race as I junior, and had dinner with Drew Dedo, a  team mate from the SRC/Michael’s Cyclery era.  Plus countless other people.

I hadn’t seen Eddie maybe since the mid-nineties.  He said he is 72 and raises organic stuff.  I knew he lives near Ramona, CA and he invited me to come by and stay.  I know some of you guys are going to go ape shit over Eddie, but I think I know Eddie better than most of you and the guy isn’t the original godfather of doping, so just drop it.

The short story is that Eddie and a couple clown doctors came up with a harebrained plan of blood doping, right before the 1984 Olympics.  It is amazing that they didn’t kill a rider.  But the “practice” wasn’t banned and doping wasn’t the same then as it is now.   No one officially broke the rules and no one lost a medal.  But, looking back for the current mindset, it was all fucked up.

I’ve known Eddie since I was 17 and have had a ton of disagreement with him, but nothing over doping.  It is funny how people tend to forget the bad parts of a relationship and remember the good.  Anyway, I like the guy and he might be the reason that I got the opportunity to race my bike all over the world.

The junior women crashed it again yesterday.  They finished 1-2 in the time trial and repeated those same results in the road race.  The course stayed dry for them, so that was awesome.

The U23’s weren’t so lucky.  Nearly, but on the last lap, it started raining just enough.  The course got slick and guys started falling the last half of the race.  Kevin Ledanois, from France, made a calculated move at the top of Libby Hill and rode unreal to the line.  Kevin is the son of a sport director for BMC.  He made it to the line a couple bike lengths ahead of an Italian.  Then another French guy, then another Italian.  The whole race really played out the last 4 kms.

The junior men are lined up now.  It isn’t raining, but the roads are wet.  It is going to be one of those days on the bike for these guys.  Most of them probably don’t have a ton of experience in these conditions, so it will be interesting.

Last night we watched the start of the Brompton race, then walked over to the 23rd street climb to watch them go up it.  The Brompton bikes only have a maximum of 6 gears, so climbing the cobbles wet, was a challenge.  The first few guys made it, then the walking started.  Plus, they were doing a grand fondo type ride on the course for anyone that paid $100 or more.

When those guys started up, it was Battle of the Bulge.  I guess there were 1300 guys that entered the tour, (do the math) so after a bit, it was a log jam on 23rd street.  90% of the riders were walking in their cleats.  It was so entertaining listening to what guys were saying walking up.  They were walking on the sides and trying to leave the middle clear for people riding, but that didn’t really pan out.  Pretty soon nearly everyone walked.  I saw Chris DiStefano, from Rapha and he saw me in the dark. He said that this was the most dangerous thing he had ever done on a bike, and that is saying something for him.  It look that way.

The front of the “tour” was hauling.  Like race hauling.  I’m not positive, but sort of sure that George Hincapie was leading the line up the hill the first time.  At least it looked like  George in a Hincapie kit.  I’m not sure what to think about that.  Maybe he just paid his $100 and thought he’d get in a few hot laps on the course?

After, we walked down to Shockoe Bottom and met up with Drew and his wife for dinner.  It was super catching up.  For some reason, early friendships seem more vivid in memories than current.  That didn’t really come out right, but that is the best I can do right now.  Anyway, we stayed out late and it was good.

I’m thinking about running some today.  Just thinking, probably not doing.  Since I’ve been doing so much walking, the next step is running.  I’m worried that if I run, I won’t be able to stand during the Elite men’s race tomorrow.  That would probably be true.   I might have to put it off for a couple more days.  Or maybe just run a couple miles today.  I don’t really have any way to clean my bike, if I ride in the rain, so I’m hesitant to go out.

Okay, enough of this.  The junior men started and I’d like to watch some of that race. 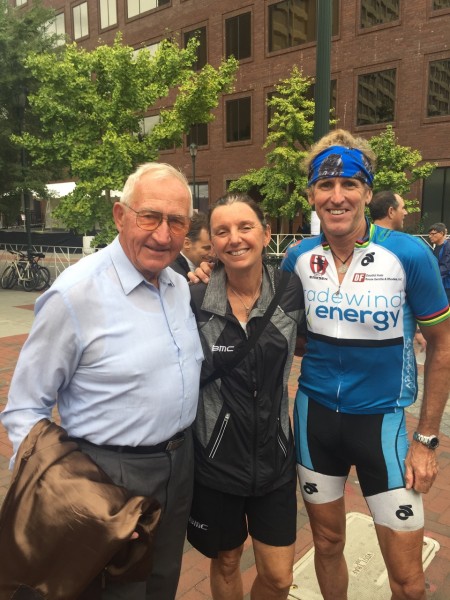 Eddie, Trudi and I. 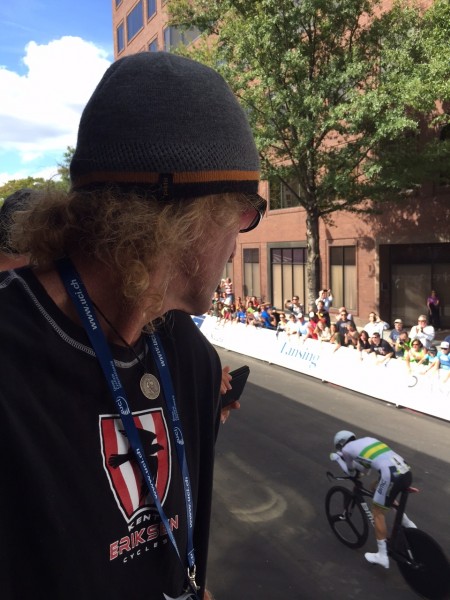 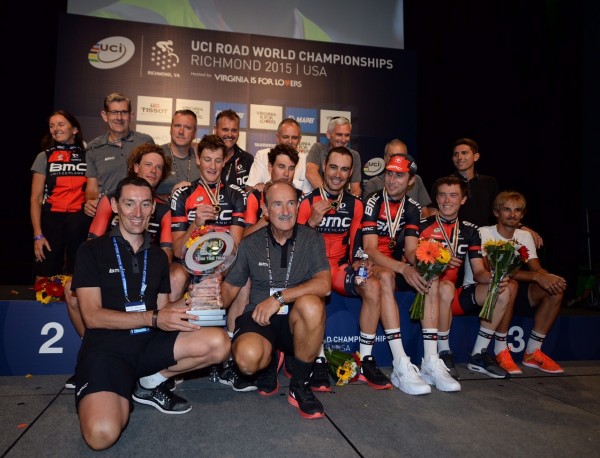 The TTT presentation. Trudi is on the left and must be interested in something else and is looking off into the distance. 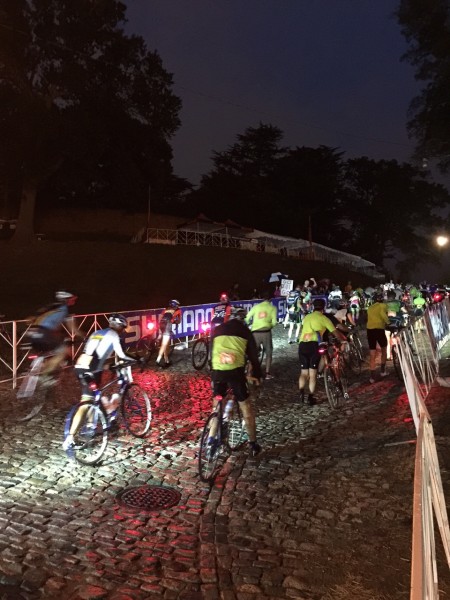 Carnage of the 23rd Street cobbles last night in the rain. 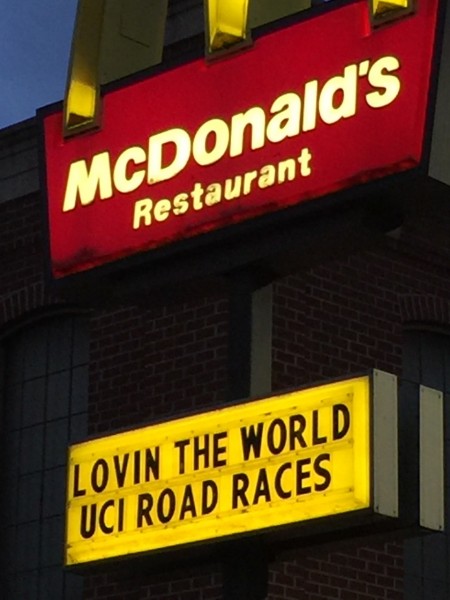 Even McDonalds is flying the colors here in Richmond.