Chequamegon is a race I’ve done a zillion times.  Well, that is an exaggeration, but I’ve ridden the race since 1998 I think, so 17 times now.  Even with being injured over the years, I’ve never been hurt enough to have to miss the race, which is mildly incredible.

I know the course like the back of my hand, which is an advantage, but there are a lot of guys that know the course super well.  And it’s not really a course, anymore, that you really have to know perfectly.  Over the years the 40 miles from Hayward to Telemark have gotten more and more well groomed and it’s nearly more like a technical gravel grinder than MTB race. Whatever you want to call it, the race is a blast and my favorite weekend of the season.

This year, I was a little more iffy than others past.  Usually, I know whether I am going to be in contention.  This year I felt pretty okay, but was so on and off on a daily basis  that I was just hoping to have a great day. And that didn’t happen.  I only had a so/so day.

As usual, the race is controlled through Hayward until it hits a couple mile asphalt stretch on highway 77.  That is when the race starts.  The quads accelerated and I stayed on one as long as my gears allowed.  The field was just really strung out.  We stayed together and I jumped for Rosie’s field and hit it in the lead.  There is a new road just a couple hundred meters into the field and it was soupy, so I wanted to be at the front crossing the road.  It wasn’t an issue.

Then the front group started forming in the field and by the time we hit the Birkie ski trail, a couple minutes later, we were in line going pretty hard.  Here I felt just okay.  It was still a huge group and I knew most of the guys riding in front of me, but not all.  Jeff Hall was riding at the front quite a bit and when he was pulling it was going fast.

We stayed together for the first Birkie trail section, on Phipps Fire Rd. then back to the Birkie Trail for 6 more miles.  I got a little shuffled back further than I wanted, but felt okay enough not to worry about it too much.  About half way to OO, Jeff Hall pulled out from a couple guys back and jumped.  I was super surprised that no one reacted.  I was probably 10-15 guys back and  it was bumpy grass off the dirt trail, so I just stayed in line.

I knew Jeff was going well.  He done the same thing in the Lutzen 99’er a couple months ago and it took Brian and I around 40 miles to chase him down and we only had 25 miles here.  I rode up to Brian Matter and said that if we didn’t go the race was over.  Brian already knew the situation and he did go to the front and took a big pull.  Right before OO, I jumped and got a small gap.  I was planning on going hard until I could at least see Jeff. But as we cross OO and re-entered the Birkie trail I heard a time split of 1:15.  I though, “shit, it’s over”.  Jesse LaLonde, who has won the race before, on a singlespeed, came by and I just sat up.  We hit Janet Road and there were less than 20 of us left, but no one had any interest in riding together.

At Martel’s pot hole area, the most technical part of the course, a doubletrack with some water holes and a couple trickey, fast descents, I jumped again.  I had ridden the section a couple days earlier and was hoping to split the group to a reasonable size that might feel compelled to work together.  I had a fast line around the front huge puddle and hit it from there.  After a bit, Dave Flaten, US Air Force, was right on me and he told me we had a gap.  I rode the rest of the section pretty steady, but didn’t feel like I have big accelerations in me.  We lost a few guys, but there were still 15 of us by the time we got out to Bodecker.

There are some long stretches on Bodecker and we couldn’t see anyone ahead.  This is probably where I started loosing motivation.  Not that I’m not interested in getting 2nd in Chequamegon, but I am way less interested in racing for 2nd than for 1st and it seemed like we were racing for 2nd.  So, I just sat at the back, waiting for the next narrow section to try to get away again.

That section is before a couple miles before the high point.  I jumped again and Dave and I separated again.  When we got out to the road, Dave took a big pull, but just a bit later, starting up a small climb before the high point, Corey Stelljes jumped  by and put in a big dig.  It had rained the night before and this section had a bunch of water puddles that weren’t there on Wednesday.  I got shuffled back a bit and we had some issues deciding which side to negotiate the puddles, so we got a little split up.  We got back onto the snow mobile track before the Firetower Climb and this is where it really went south for me.

I was too far back in line for climbing the Seeley Firetower Climb.  It is a 2-3 minute climb that goes up in 4 pitches.  It is rocky and somewhat tricky.  I was 4 or 5 guys back turning up the climb.  Brian Matter came on my inside pretty hot and I got a little twisted up heading up the first steep section.  I was planning on leading up the climb and never thought I’d be back in line.

The climb was way slicker than I’d anticipated, from the rain.  I spun my rear wheel on a root, then again on some wet rocks and lost a few bike lengths.  I wasn’t worried because I felt aright.  I was planning on riding the steep pitches easy, then the transitions hard, but I bobbled again and a couple guys went by, one was Jesse LaLonde, the other Jesse Bender.  I got behind Jesse and he was climbing just steady.  But it was too slow and we were losing the group.  I only have myself to blame, I opened up the original gap and was confident I could close it on the top.  Jesse was dismounting and running the steep sections.

Anyway, I went over the top maybe 20 seconds back. I saw that a couple guys split off the front of the group, it was Dave and Corey, but I thought it would probably get back together. RIght then I heard a time split to Jeff at 1:45.  That was bad.

I followed Jesse and his Kuhl team mate to the Birkie Trail and then took off again, thinking I would get back to the group racing for 2nd, but that wasn’t to be.  After about half the Birkie section, there was a group of 5 just a 100 meters ahead of me on the hills, but I wasn’t going good enough.  I made up about half the distance and knew if I didn’t catch them by the end of the Birkie Trail I was done for.  And I didn’t.

When I got to the road, about 7 miles from the finish, they were gone and I was alone.  I was feeling okay and got going pretty good, but wasn’t that motivated.  I knew I was in the top 10 and didn’t really care if I got 4th or 9th.  So I rode to the finish alone in 9th, a little shell shocked.

What really surprised me when I arrived was that Dave Flatten, who had motored to 2nd, was only 8 seconds behind Jeff Hall at the end.   That bummed me out completely.  I thought Jeff had maybe blown the last 10 miles, but it is mainly downhill.  I talked to him and he said that he was going pretty good all the way to the finish.

As it turned out, we were getting erroneous time splits.  I know better than to listen to people I don’t know yelling out times, but when more than one person says the same thing, then it becomes believable.  Jeff actually had less than 40 seconds at the top of the Firetower.  If I would have been riding at the front, I probably could have seen him ahead.  That would have changed the whole race for me.  But I wasn’t riding the climb and the front and rode the climb horribly, thus wasn’t in contention at the end.

It is hard being upset not winning Chequamegon.  I wasn’t have that day.  But, it was a winnable year.  Brian and Tristan seemed to be a notch off.  Dave and Corey were riding incredibly strong and would have been hard to beat if it came down to the end, but the race, in retrospect was winnable.

Jeff Hall road incredible.  He was by himself for 25 miles and that isn’t an easy thing to do with the course so wide open in so many places.  A group nearly always rolls way faster than an individual can ride.

The day was perfect.  Cool at the start, then perfect.  The finish area was huge this year.  Molly was playing music and beer was flowing.  It was so nice just standing, soaking up the sun, endorphins running through my body.  We stayed around the venue for way longer than usual. I listened to Molly sing for a while and caught up with friends and future friends.

Bill had gotten split off right when we hit the Birkie trail early, but had got going later.  He said he was flying at the end and finished 26th, which was respectable getting shelled so early. Catherine rode a steady race and was 12th woman and won her age group handily.  She seemed happy, which she should, just getting back into the swing of racing, having moved back to Topeka 3 months ago.

Chloe Woodruff won the women’s race handily.  She rode super fast, just 13 minutes off the men’s time.  I think this is her 2nd win there.  She is local, so she must be super happy.

They moved the awards up to 4 pm and gave out the 40 mile awards first, so we didn’t have a chance to cut any wood, so yesterday we woke up and did that for a few hours.  Then we went and rode singletrack.

Today I’m flying to Richmond Virginia to the Road World Championships.  I am going to go for a ride in Minneapolis soon, then head over to the airport.  Trudi has been working like crazy for the team time trial, which was yesterday.  BMC won the event by 11 seconds and repeated their last seasons victory.  She sounded excited being behind the scenes in the whole adventure.

We’re staying in Richmond until early next week, then driving a BMC car back to the Midwest.   We might take a couple detours, but we’ll probably just decide those as they become clear. 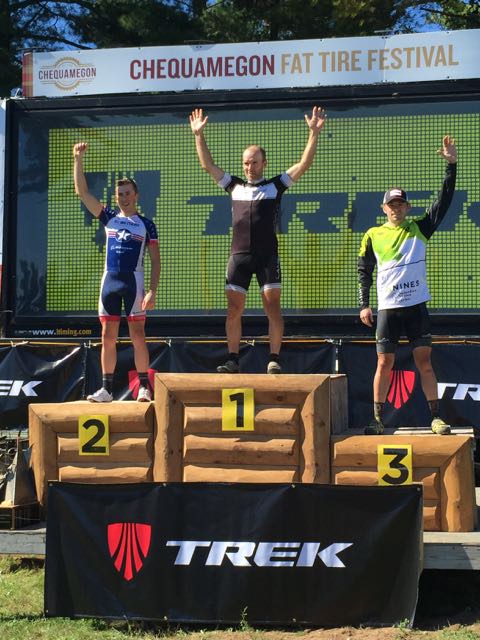 Jeff, Dave and Corey on the podium. 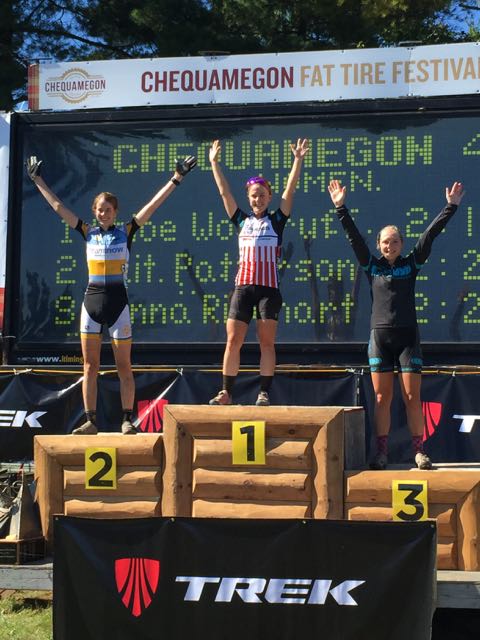 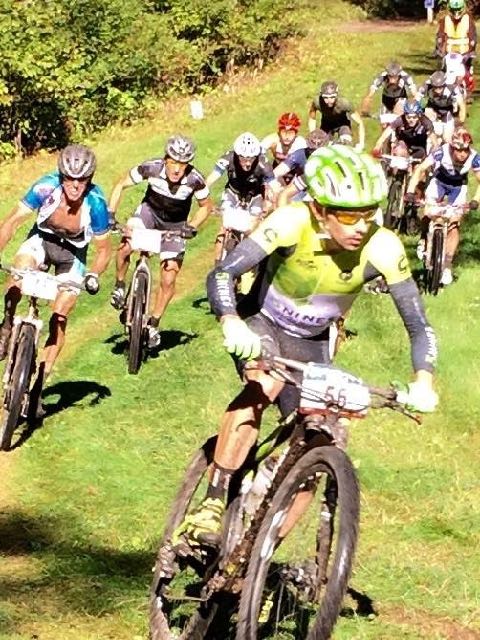 Corey leading early on. Jeff is still there, a rider behind me. 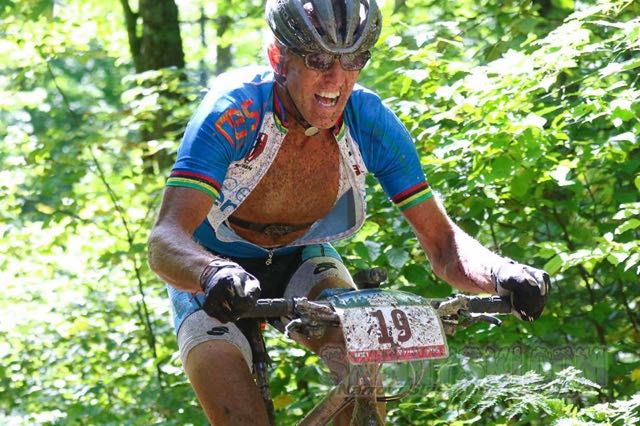 Not looking so under control on the Firetower climb. 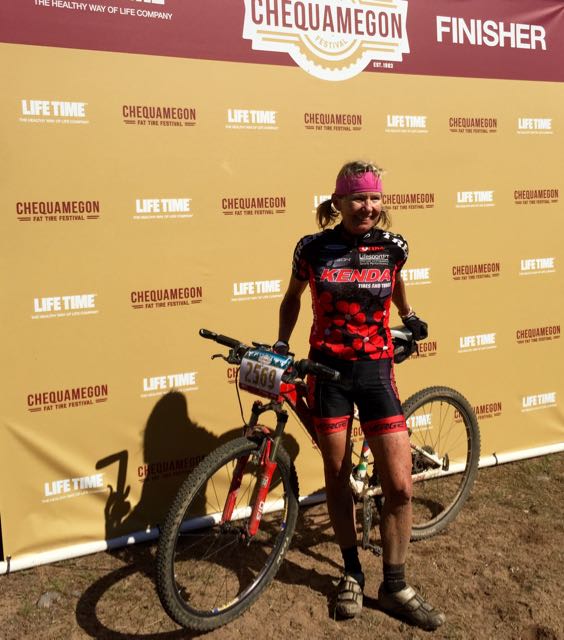 Catherine was happy after the race. 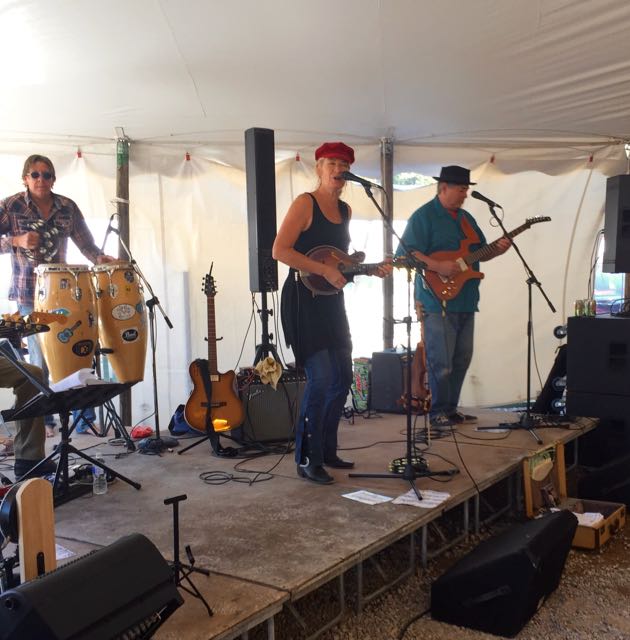 Molly playing in the tent. I could listen to her all day. 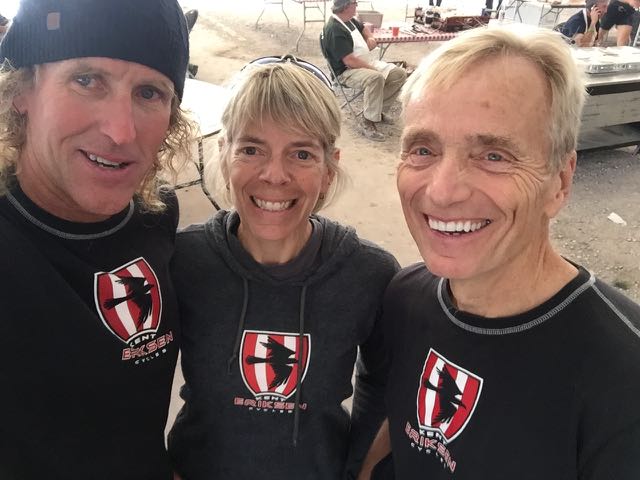 Dennis, Katie and I after.