I managed to stay upright and have all my skin after 4 days/nights of criterium racing in St. Louis. It is fairly unusual, especially approaching fall, where you can race four days of criteriums in a row.  It is just what I needed.

Yesterday, the race near Benton Park is the hardest race of the weekend.  The course has a ton of tricky corners and there is just enough elevation change that the field is super strung out and thus, lots of guys get shelled.

The race is really a positioning race.  If you’re not riding towards the front, you are putting out a ton more wattage than if you were.  Sometimes I’d be 400 meters up the start finish stretch and I’d hear Frankie Andreu say that the field is still coming around the last corner.  All I could think was that those guys have nearly no control of their destiny.

The race was most likely going to be a field sprint.  So many of these teams that are travelling the NCC circuit have no other game plan than to field sprint, so that is what is going to usually happen.  UHC sent Adrain Hegywary off the front for a long break, but an individual was never going to stay away.  Even Brad Huff, who can field sprint crazy good, did a suicide solo move with a few laps to go.  He stayed away until the final lap, with UHC lining it up to haul him back in.

My race went just okay.  I was feeling alright, no speed as usual, but I wasn’t having any trouble dieseling back up out of the corners.  Towards the end of the race, I was concentrating on staying somewhat near the front of the field, which is easier said than done.

I was pretty good on the last lap, better than pretty good, just 5 or so guys behind the UHC train, which was 6 of them.  But, I made a huge error that I couldn’t recover from.

On the last right hand corner, about a km from the finish, I came into it a little hot, trying to be right on the wheel ahead of me.  After the corner, the road goes downhill for a few hundred meters, super fast, and if you’re not drafting it is game over.

Anyway, the two guys in front of me got into it a little bumping match and my front wheel got in between them, I had to tap my brakes and that was it.  I was two or three bikes lengths off and it was going over 40 mph.  I ended up riding  the whole stretch in the wind, with just two corners to go.  RIght before the next left corner, a lot of guys went by me.  I was lucky to be able to slot back into line and get back up to speed, but by then I had lost 10 slots and a good result wasn’t possible.

Coming out of the last corner, a guy that had just went by my outside, I think it was Nolan Tankersley, took the corner way too wide and fell.  His bike hit the barrier and bounced back towards me.  See video below.  It is weird, because from recollection, it seemed like the bike was higher and way closer than it really was.  I had to swerve, which you can see on the video.  I passed a few leadout guys before the finish, but I was going nowhere, having wasted all my energy screwing up earlier.  I finished 19th.

I guess I feel better about finishing 19th than 17th the day before.  I was in a good position to have a result, but didn’t have the juice to recover from a huge mistake.  And the huge mistake was just tapping my brakes once.  Bike racing is interesting in that regard.

There seemed to be a lot of crashes the whole weekend.  I’m not sure why that was.  There was lots of bumping and elbows being thrown, but I never saw anyone fall from that.  Maybe it is the stiff bikes and harsh ride of carbon, deep-dish wheels.  Or the “new” position of having your handlebars way down, no headset spacers.  Or maybe it was because a ton of guys were at their limit and they make mistakes then.  Whatever the reason, there were probably 15-20 guys that fell each day.  Multiply that by 4 days, then it was 80 separate riders falling.  Out of 130 starters, that is over a 60% chance of hitting the ground.  That doesn’t count the guys that fell more than once.  Seems high.

Driving back from St. Louis last night was way more dangerous than the race.  We drove into a huge storm just past Kansas City and it was blinding rain until Topeka, which is 60 miles.  We came upon a SUV that was on its side in the middle of the interstate.  There were two highway patrol cars already there, but no one was outside and no one was moving.  A bolt of lightning struck right next to the van.  It was so loud and bright that it scared the shit out of us.  Catherine didn’t have any power when I dropped her off.  I love weather, but it can sometimes be super scary when you are in it.

It is supposed to rain on and off all day here in Kansas.  I’m sure I’ll find a slot to be able to go out for a spin.  I didn’t wake up that tired today, but it is usually tomorrow, 2 days after, when it hits.  So, two weeks until Chequamegon.  I need to ride my MTB a ton this week I think. 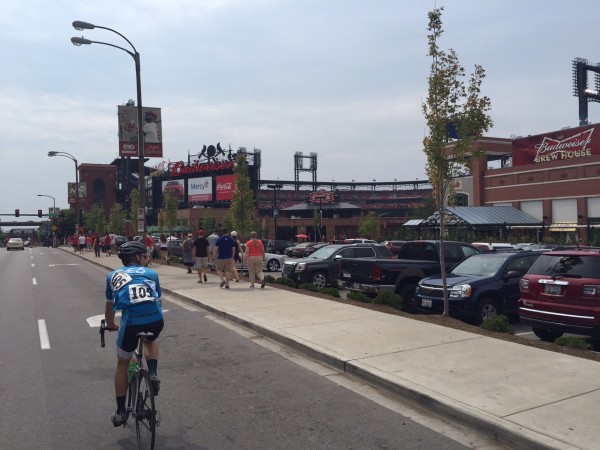 We rode by the St. Louis Cardinal stadium warming up. They were playing the Cubs and there were a ton a people there. 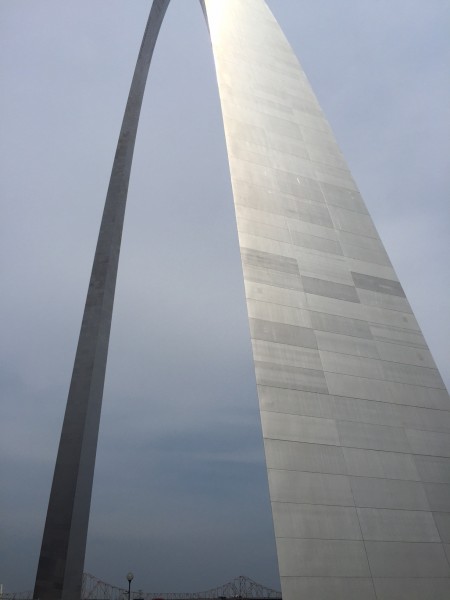 The arch is super close too, so we rode over to check it out. 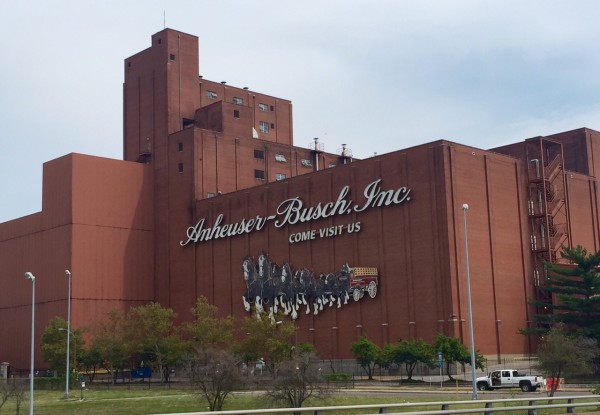 The race went directly by the Budweiser brewery. It is huge. 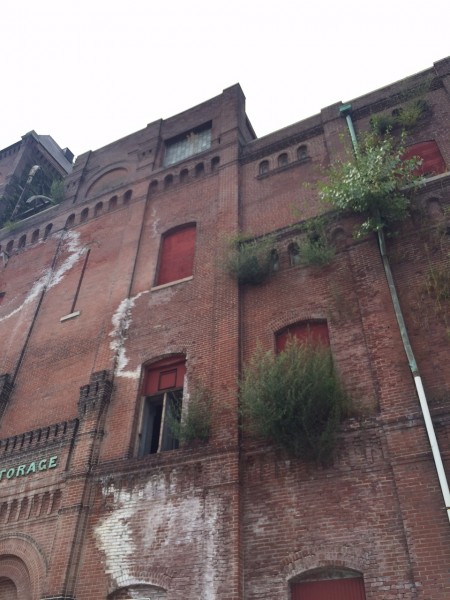 This building was just off the course. There are so many huge, brick buildings in St. Louis. This one is obviously abandoned. I have never seen trees growing out of brick before. 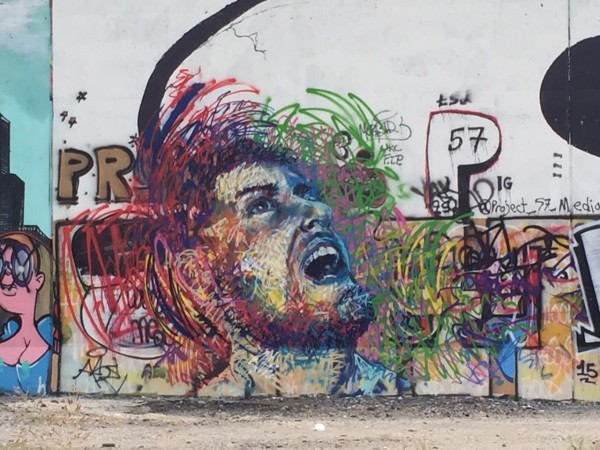 This art work is down on the levee on the Mississippi RIver. Pretty incredible. 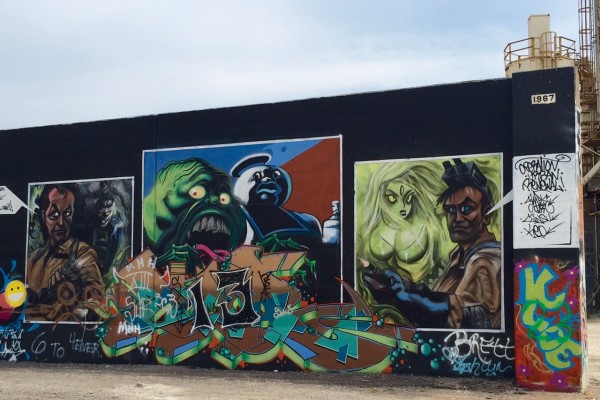 Some more. I can’t imagine how long these took. 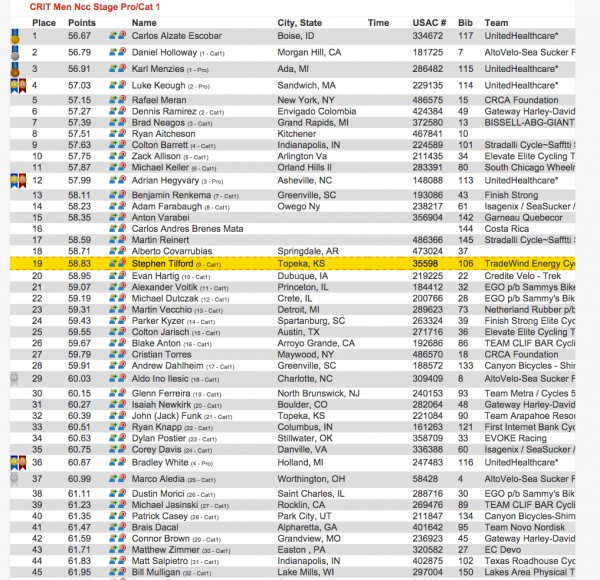 I’m in the blue, swerving around the bike that was missing its front wheel.