Yesterday didn’t quite go as I’d planned.  I drove over to Leadville with the intention of doing a pretty easy ride.  I was going to ride after I installed a new front derailleur on my bike.  I needed a 10 speed triple and the shop in Leadville said they had one.

Anyway, I go register for the race (#239) and go to the shop across the street and get the derailleur.  Then I drove over to a parking lot on the course and set up my bike on a stand and changed the derailleur.

One thing about new front derailleurs is that they don’t have that screw that allows you to split the cage.   So, you have to break the chain each time you mess with it.  So, I put the derailleur on and it does shift worth a shit.  Like not at all.  I’m a little perplexed, but then I look at the number on the derailleur, google it, and it is for 2 by, not a triple crankset.

I end up taking it off again and putting my old 9 speed one back on.  Kent Eriksen was bringing me a box of stuff, but wasn’t going to be there until later in the day, and I wanted to go riding.  I returned the derailleur, the guy apologized and I went riding.

I was planning on just riding out the start the first 7-10 mile and then turn around, but when I got to the turn, I just kept going straight to the Powerline climb.  I was worried that I didn’t know what gear I was going to do the climb in since I put 11 speed in the back and the big cog is a 40.

My legs were feeling all heavy and I was panting, really surprised how much less air there seemed to be than lower.  I thought I was sort of used to it by now.  I started riding up the climb and felt out of balance.  And balance is the key to going up Powerline, and the top of Columbine.  I used a 24 x 35, the 2nd cog down in the back on the new XTR, and it seemed about right.

Powerline goes up steep for 200 meters, then levels for 40 or so, then goes up steep again for another couple hundred meters.  I wasn’t trying to go fast, I was just trying to stay on my bike. Anyway, I didn’t have any problems, but was a little bummed how tired my arms felt at the top. Like they were completely out of juice.

So, I turn around and coast back down the hill, going quick, but trying to make sure I know the right side to be on the whole way down.

I’m back on the road and am surprisingly tired.  So, I decide to keep riding some more, trying to feel better.  I head out the start climb, ride a little up that, then turn around and ride the finish climb up to town.  I did start feeling better, so maybe riding a little extra was good.  But, in general, I wasn’t too happy with how I was going.

Then I download my ride to Strava and according to Strava, I have the 10th fastest time ever up Powerline.  It was really surprising.  I rode 7:46 and only Christoph Sauser rode a faster time in the race.  The rest of the guys were just out riding like me.  And I wasn’t killing it or anything.   So all of a sudden, my bad ride turned into a good ride.  Funny how that happened.   Plus, I had my fastest time down the Powerline descent and I felt like I was crawling.  It’s the 4th time I’ve ridden down it, so maybe it’s not so intimidating now and I let it roll faster?  I don’t know, but it was fast enough to not be left behind too badly in the race.

Anyway, Strava has been a pretty good tool for gaging how fast to ride here at Leadville.  Nearly all the race leaders have downloaded their Leadville race files from the previous years and it is really good knowing what pace is needed to ride a certain times.  I’m not going to use it for the race, I’m just going to go as fast as I can, within the parameters of knowing it is 100 miles and nearly 7 hours, at high altitude, but for training, it has been nice.

I don’t get caught up in Strava much. But sometimes. A funny one, at least to me, is last week I’d ridden over to Vail and back with Catherine.  We met up with Stacie and Karl, then ended up sitting in Vail for a long time drinking coffee.  We had a tailwind back up the climb, but still were going slow.

At the top it looked like rain and hardly anyone was up there.  Catherine said something about not waiting for her descending on the bikepath and I made a quick decision to ride down the path fast.  I could tell there would be hardly anyone there, being late in the day and looking like it was going to storm.  So, I did a quick descent.  It wasn’t crazy, like sprinting out of all the switchbacks or anything, but I was going pretty fast.  I didn’t encounter anyone else the whole way down.  I ended up 12 seconds faster than the 2nd place guy, out of some 6000+ people.

I started thinking about it and realize how stupid it was to do that on a bike path, but it is a fun descent and, really,  the only thing that made it seem stupid was that it is timed and recorded for all to see.  If I was just flying down the descent training, it would be normal.  I wasn’t taking any crazy risks and was cognizant of potential people/children, so in that regard it wasn’t risky to anyone but myself.   Anyway, most downhill Strava sections should be avoided.  If you happen to be going fast downhill, you don’t have to turn off your Garmin or anything, but don’t go out of your way to compete while training.  There are too many things that could go haywire.

Tomorrow is the race.  I’m not too big at getting up before 4 am for a bike race.  I had been planning on going to bed earlier each day this week, but that didn’t work.  Last night I didn’t go to sleep until after 1am.  I was think that tomorrow I’d have to be getting up in 3 hours.  It starts at 6:30 in Leadville, which is about 45 minutes from Silverthorne.

I still need to bleed my brakes, but other than that, my bike seems ready enough.  I am going to rest today, can’t see any reason to use any extra energy before the race. 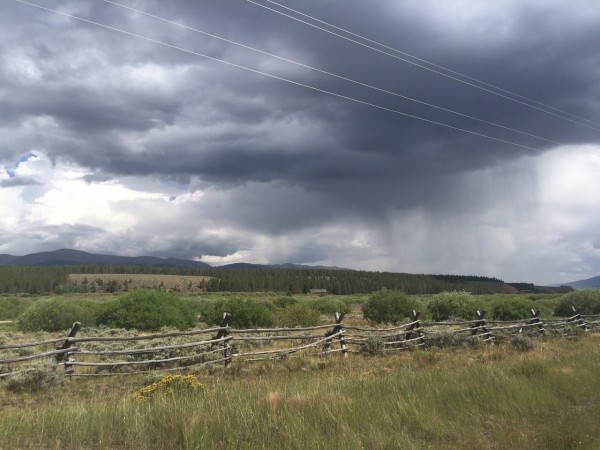 I barely missed getting drenched in Leadville yesterday. 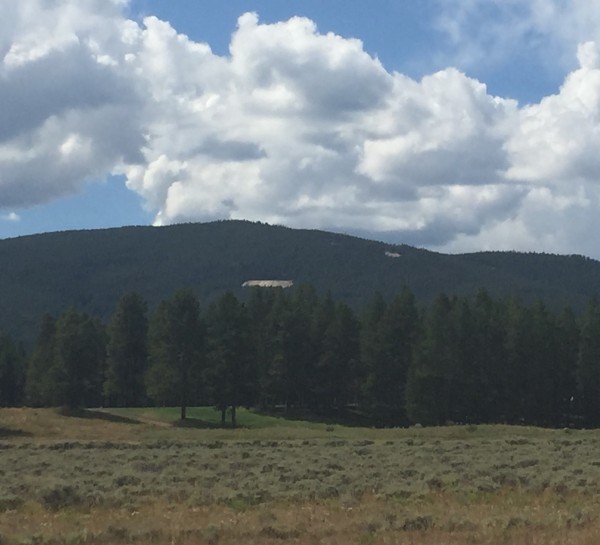 The Powerline climb connects the two open sections on this hill. They are old mine shafts.

19 thoughts on “Leadville Tomorrow – Strava as a Tool”