Jonathan Vaughters announced, via tweeter, that this Tom Danielson doping positive won’t derail his program, that he has too many “good people” to support, thus he and Doug will continue with the sport and not abide by this statement – “It’s true we ask for that [scrutiny] and still in ten years we’ve not had a rider dope on our team. Ever. We’ve lived up to that. That was the initial promise. If that ever is broken then Doug and I are out.”

Did anyone really expect anything different?  The initial statement was ludicrous to start with. Anyway, I’ve been mulling over the whole thing and can’t even put it into words, right now, how foreseeable this whole deal was.  But, I will.

Think there is any bad blood between Jonathan and Lance?  How about Lance’s response to Jonathan’s tweet announcement. 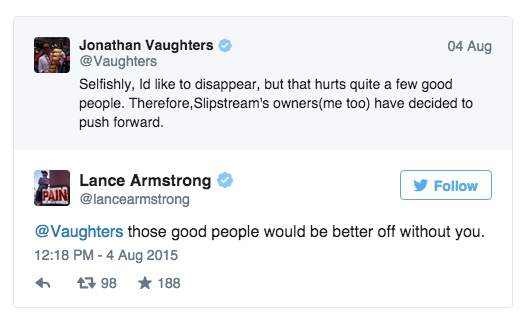 57 thoughts on “Jonathan Vaughters – The Team will Continue”