Today, I was woken up super early by my phone with numerous text notifications about Tom Danielson being positive for synthetic testosterone.  For me, I just rolled over and tried to go back to sleep.  It isn’t anything that I didn’t already know.  Well, I didn’t know that he was going to be so stupid to be caught doping, especially with synthetic testosterone, when it is so hard to get caught, but it wasn’t a surprise at all, that he was, and is, currently doping.

This is one of his tweets from last night.  “Especially after everything I have gone through the last years.”  He is saying that it makes “absolutely no sense” that he would take drugs currently, even though he took drugs to get into the Pro ranks of the sport and was only “caught” after he was subpoenaed to testify concerning Lance.  And even then, it wasn’t public until his team director, Jonathan Vaughters “leaked” it so brilliantly.

I already wrote a pretty long post on my views of Tommy D.  Here is the link.  It pretty much summed up my experiences with him over his “career”.

Anyway, addressing his tweet.  My question is why wouldn’t you “take anything”, especially after what you have gone through.  You’ve been racing on drugs your whole career and have never turned up a positive doping control, so what would be the reason that you wouldn’t dope?  The reason is the small, minute chance that you might get caught.  And that happened.  Dang.  Bad luck.

So, your choices are you dope and feel great, kick ass racing bikes, or you are a piece of shit athlete and you can’t compete and you have to watch from the outside.  You made that choice years ago, I can’t see any reason you would stop.

Tom is so eloquent with his tweets.  This maybe explains one reason he dopes.  But, like most of these guys, he is being super greedy and really doesn’t love the sport.  He loves himself and wants the easy money, fame and such.  If he truly loved the sport, he would quietly disappear into the history books, with a couple of asterisks next to his name.

But, Tom won’t quietly disappear.  He is going to go down kicking and screaming.  Because if his B sample turns up positive, (and it will, it’s synthetic testosterone) then he is going to be facing a lifetime ban, so there is no downside to proclaiming innocence until it really becomes a moot point.  Then Tom becomes minute, so small as to verge on insignificant.  We’ll all forget him, or, maybe NBC Sports will hire him to do commentary.

It is interesting, to me, what Jonathan Vaughters is going to say, or do the next few days, weeks, months.

From the Cyclingnews article on Tom today –

In February, Vaughters told Cyclingnews, “It’s true we ask for that [scrutiny] and still in ten years we’ve not had a rider dope on our team. Ever. We’ve lived up to that. That was the initial promise. If that ever is broken then Doug and I are out.”

So far, Jonathan’s response is – “Tom Danielson notified Slipstream Sports that he was informed by USADA that he has returned an adverse analytical A sample using carbon isotope testing. In accordance with Slipstream Sports’ zero tolerance anti-doping policy, he has been suspended from competition, effective immediately. He awaits the results his B sample. Slipstream respects and will adhere to the process of the anti-doping authorities and will not comment further.”

So, Tom is going to be suspended for competition?   And Slipstream “will not comment further”. It is funny, Jonathan usually has a ton to say on these subjects.  Guess he is at loss for words in this situation.

Okay, I’m done with this for today.  I have better things to do, like feeding the hummingbirds. 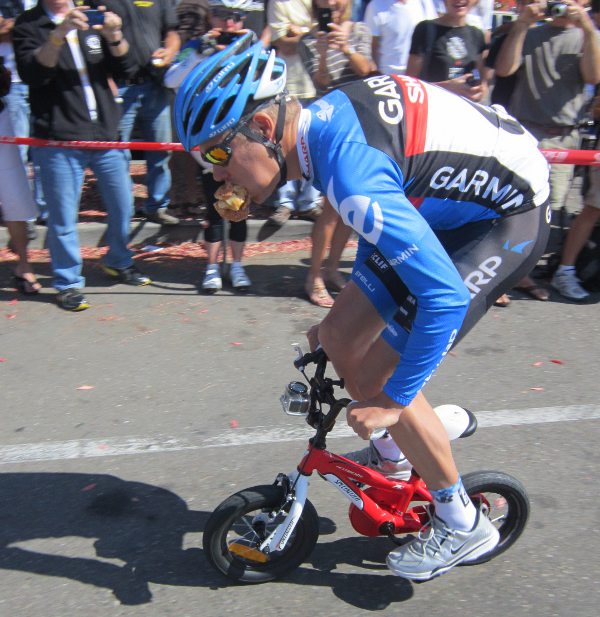 I’m sure he will still be welcomed back at Levis’ Granfondo this year. He is such a crowd pleaser.