We met up with Bob Campbell, VIncent’s friend that I rode the Old Pueblo MTB race with on a team back, in February, in Copper Mountain and then started off.  But not very fast because it is pretty much straight uphill for an hour.  We were on the Colorado Trail and it is great, nearly the perfect grade for a mountain bike.

On the way up, we ran into a rider that was doing the Colorado Trail Race, an unsupported 500 mile race from Durango to Denver.   I didn’t quite catch the rider’s name, Fabian is what I heard, but that’s not close (Jefe Branham is his name) .  Anyway, he was super nice and had time to talk for a few minutes.  He was in either 2nd or 3rd, depending on who what right, but whatever his place, he was tough.  He was 3 days into it and was going to finish today sometime.  He has done the race before, but this year he said he decided to sleep some.  He said the guy that was winning was sleeping too, but riding so much faster.  Anyway, I wished him luck.

It was beautiful riding up to Kokomo Pass.  We rode over 11,000 feet for quite a while.  It was a super day, not much wind and warm.  It is unusual to be up over 12000 feet in a short sleeve jersey.

We were taking our time.  Bob burped a tire on a descent and we had to stop a couple times to put air into it, but that was fine.  It was nice not having to concentrate on the trail and get a chance to look around at the amazing scenery.  And it was really amazing.

The last half of the ride is pretty much on jeep road.  Climbing up Resolution Road is really difficult.  It starts gradual, then get steeper and steeper.   It took me nearly an hour to climb, that that was stopping a couple times to regroup.  I was looking at the Strava times and I was right about the same as Scott Tietzel and Kris Ochs’ time of 49 + minutes, subtracting out the 10 minutes my Garmin said I wasn’t moving.  There is only one speed to go the last couple miles. And that is slow.  I think the grade max’s out at 16-18% and it is a little tricky picking lines.  I had the unfortunate luck of a bunch of quads passing me, up and down, on the hardest sections, thus bad air.

We got to the top of the pass and it was pretty much all downhill back to Copper Mountain.  It took us a little over 3 hours riding time, with most of that climbing slow.

I told Vincent that I wanted to ride back to Silverthorn from Copper Mountain.  When I got to Frisco, I decided that I hadn’t ridden enough so I started south, planning on doing a loop of Lake Dillon.  But I got to the Peaks Trail, a trail going from Frisco to Breckenridge and decide to ride it.  I felt pretty good, nearly 4 hours into it.  I was riding this trail much better than I had a couple days ago.  It flows so much better going faster.

Next thing I know, I’m in Breckenridge.  The trail was such a blast I just couldn’t stop.  I called Vincent to tell him that I was still over 20 miles away and he said he would get dinner and have it waiting.  What service!

I just rode back on the bike path that was along the road.  It was a wicked headwind.  Pretty soon, a father and son passed me,on road bikes, going pretty good, over 23-25mph.  I just got on behind them and got a free ride most of the way to Frisco.

Coming over the dam in Dillion, I had that nice endorphine buzz going.  There is so much scenery to try to absorb.  I still had 5 miles to get back to Vincent.  Right before the house, I had to cross the Blue River, which is really a big stream.  I stopped at the bridge and went to the water to do an “ice plunge”.  The water is pretty cold, not freezing, but cold enough that after about 5 minutes my whole body was chilled.  It was a super way to finish the day.

Vincent had dinner waiting for me.  And I was hungry.  Pretty great day all around.

Total I had 71 miles in just a tad over 6 hours, with 7000 feet of climbing.  It seemed like a lot more climbing, but the Peaks Trail is really pretty flat and riding back from Breckenridge doesn’t have any hills either.

This is going to be a big week, for me, riding.    I already have 14 hours and almost 17K feet of climbing.  That is in just 3 days.   I’m going to ride over to Vail and back today on my road bike, which is a little under 80 miles.  Then rest tomorrow and ride the organized Copper Triangle ride on Saturday, from Silverthorn, which will be close to 120 miles I think.  That should make the week a little over 30 hours, with over 30000 feet of climbing I think.

Okay, enough of this saga.  I should get out and enjoy the mountains some. 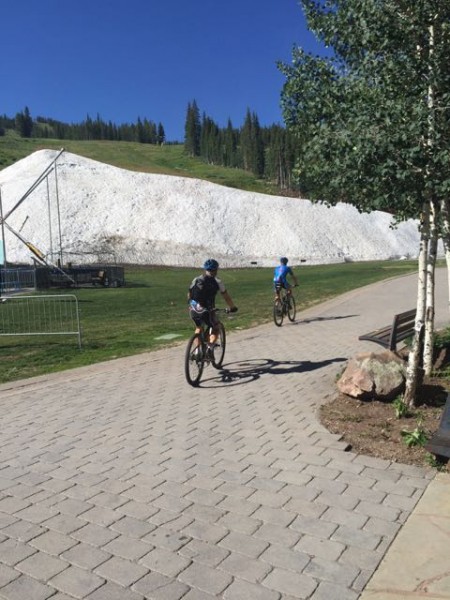 Bob and VIncent ahead of me starting out in Copper Mountain. The pile of snow is left over from a half pipe or something. 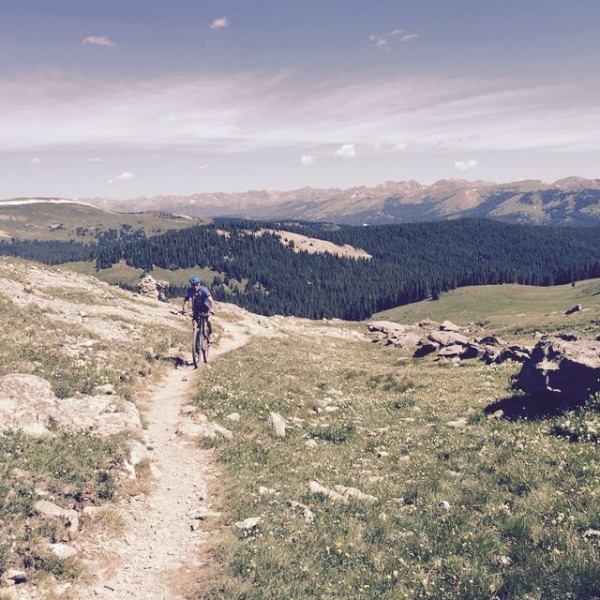 Vincent climbing up towards Kokomo Pass. 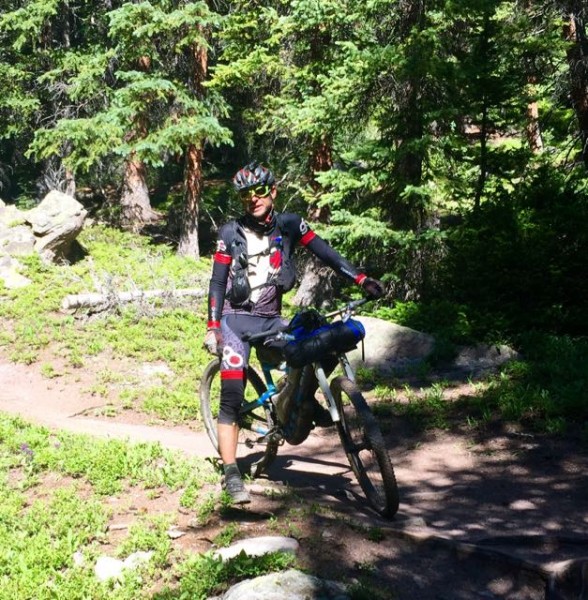 We met up with Jefe Branham, who was doing the Colorado Trail Race. Super nice guy.  His bike weighed over 50 lbs loaded up. 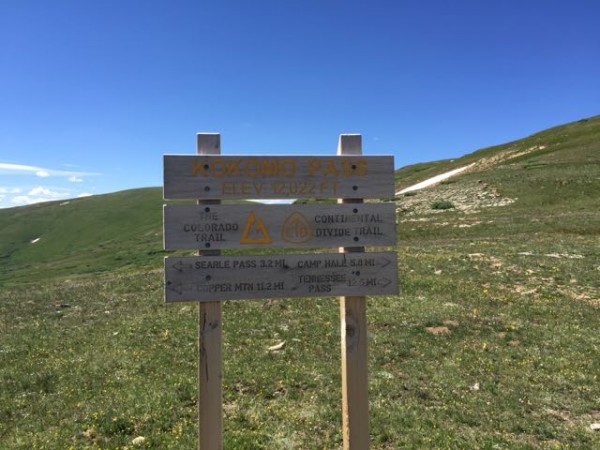 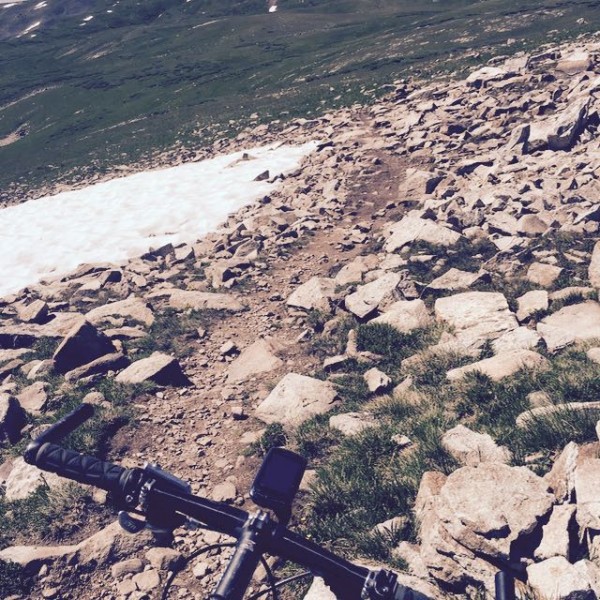 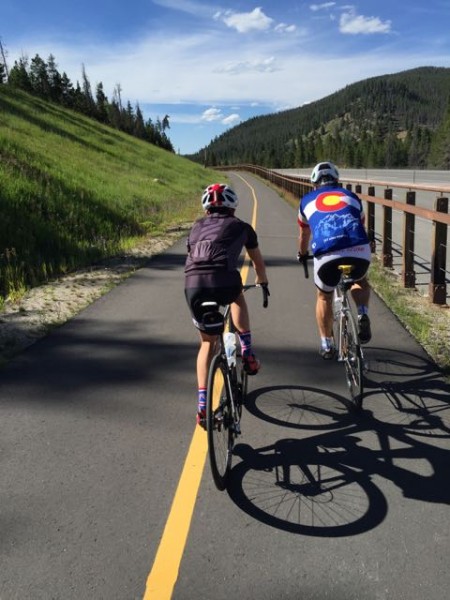 The father son duo that I caught a ride behind on the way back from Breckenridge. Initially, the father was pulling and I was getting almost no draft. But then the son got to the front and I was on easy street. 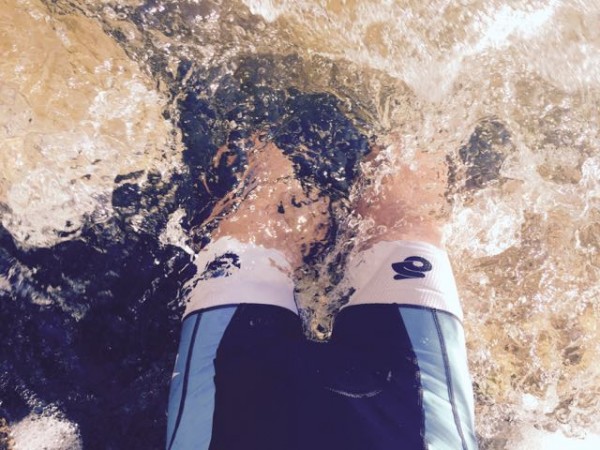 Soaking my legs in the chilly water of the Blue River. 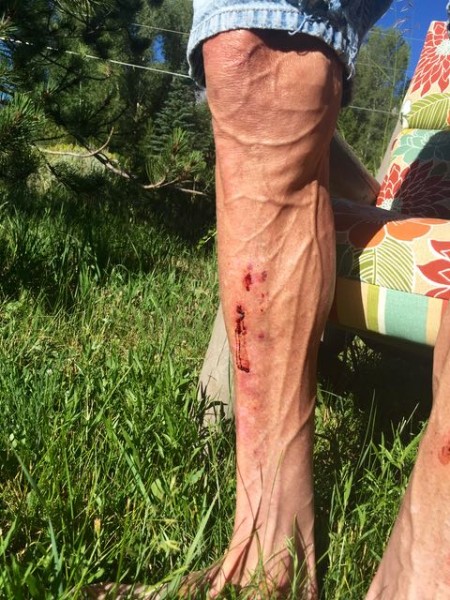 My legs are starting to look a little creepy. I have always had an issue with scrapping up my shins on my pedals mountain biking, so this is nothing new.

8 thoughts on “Dirty Copper Triangle Plus Some”