I’m just getting back into the sport, so have to pay my dues.  Especially at altitude.  I wrote a little about the event yesterday, but it was way more than just being a little off in my abilities.

It is a pretty crazy hard start to the 25 mile point to point event.  It goes uphill for maybe 20 minutes, with the top section being super steep and loose.  I knew I had no ability to start hard at 9000+ feet of altitude, at any pace, so I just casually rode off the line.  Eventually I settled into a place towards the end of the field of 30+ riders.

Soon guys started fading as the front of the race pulled away and disappeared up the hill.  I didn’t really care, I had no expectations and there wasn’t anything I could do about it anyway.

Towards the top of the climb, Vincent came up to me on the steep pitch.  We kept going and eventually caught up with Brad BIngham, welder at Eriksen and just off a 14th place at the MTB National Championships in Mammouth Lake, CA last weekend.  I started down the first descent and didn’t realize how technical it was going to be.  Brad, then Vincent, blew by me and disappeared down the trail.

I did catch a couple guys going downhill, then a couple more on the next climb.  I was actually riding better than I had anticipated.  I’ve had a sore throat the whole time I’ve been in Colorado, and knew that racing, and breathing super hard, was going to be a bit risky since I felt a smidgen sick.  But, I seemed to be okay.

About 2/3’rd the way through, I could see Vincent again.  He was catching a couple guys on a climb and I was maybe 30 seconds behind him.  He jumped over the top to get into the singletrack in the lead and I got stuck behind them.  I tried to pass the first guy at the bottom of a descent, but only managed to miss a small bridge over a little stream and ended up in mid-calve deep water not moving.  I just laughed.

I caught back up with these two other guys and they were nice enough to let me pass when it got a little more open.  I could then see Vincent and then Brad on the next climb.  I caught up to VIncent and asked him when the race was over.  I had pretty much “experienced” enough of that trail.  It took a lot of energy and concentration to go downhill fast.  And it seemed mildly unsafe.  I was wishing for a dual suspension bike the whole time.

Anyway, I passed both Vincent and Brad on the next climb and then there was a longish open climb up by the ski resort in Winter Park.  I couldn’t see anyone a head of me, which was at least a minute and those guys were pretty close behind me.

We hit another singletrack, which kind of turned out to be the last one, with a small hill in the middle.  Brad passed me first.  He is a super descender.  Looking at Strava, he has the fastest times on many of the downhill sections of the race.   If he doesn’t have them, then Vincent does.

I rode behind Brad for a little bit until I caught my left foot on a sawed off tree stump and tweaked my ankle.  Right after that, there was a super tight u-turn, which I could barely negotiate.  Vincent came by pretty soon after.

I pretty much lost motivation here.  My Garmin was covered with mud, so I couldn’t see how much longer it was going to be.  It seemed like we had raced enough.

So, I just rolled along and then we dropped down onto a road and voilá, the finish line was just a couple hundred meters down the road.  That was nice.

It was pretty warm by then, maybe in the lower 80’s.  It felt nice just standing there after the finish, letting the sun shine down.

I talked a little with Brad and Vincent.  Brad said he wasn’t having a very good climbing day, even though he felt good before the race.  Funny how that is.   Brad was just a few seconds ahead of Vincent at the end. Vincent had been racing expert and this was his official first Pro race.  He finished 9th, which is pretty great considering. I was 10th, which is fine.

I can’t complain much about how I was going.  I didn’t put much effort into the whole deal and felt way better than I had anticipated.  I had done a pretty hard week, I had nearly 25 hours of riding and was pretty tired at the start, so I wasn’t expecting much.  I was pleasantly surprised.

I learned a bunch about what I need to do to get back up to speed racing off-road, on real MTB courses.  And this was a real MTB course.   We were just 4 or 5 minutes back on 2nd place, which was nice to know that we weren’t just getting smeared.

I wasn’t really prepared for how technical the descending was going to be.  I’m not sure I would have been better pre-riding the course.  It might have spooked me.  I did improve though.

Anyway, it was good.  My throat got a ton worse on Saturday night, then yesterday, I started putting salt onto a wet Q tip and putting it directly on the sore area.  It seems to be working, it feels much better.

I moved up to higher altitude last night, drove up to Silverthorne.  So I’m close to 9000 feet, maybe a tad lower.  Vincent is coming up tonight and we’re going to ride the Copper triangle for MTB bikes on Wednesday, it seems.  I think it is less than 40 miles, but it sounds like it is going to be a lot of steep climbing.   As long as this throat thing stays the same, or gets better, then I’ll be happy. 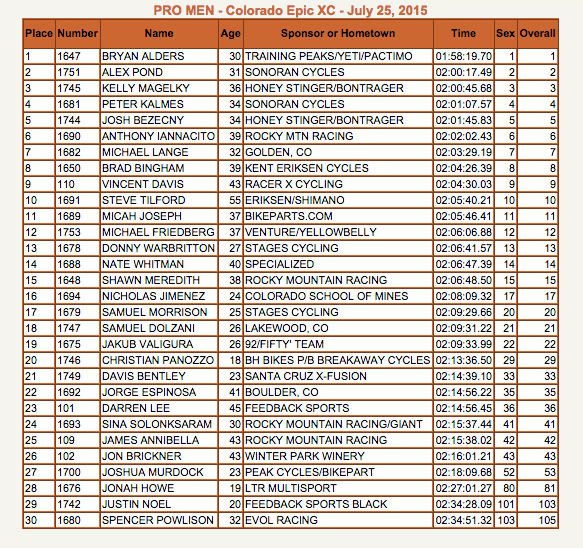