Yesterday I did exactly what I intended to do.  I got on my bike and rode 5 hours in the heat, without ever deviating from my original plan, which often happens.  I had planned to just ride, ride super easy, like easy enough my butt was going to ache from all the pressure since I wasn’t putting any on the pedals.

4 of us started.  Bill, me, Trudi and Catherine.  Bill said upfront he was under slept and wasn’t riding that far.  Trudi has been riding a ton more, but it was going to be too much for her, so after about 45 minutes, it was just Catherine and I.  It was nice because we haven’t done that much riding together recently.

So, we just rode.  It was hot.  Like 100 degree hot with the sun blazing.  And it was pretty windy, maybe 15 mph from the south.  It usually isn’t very windy when it is that hot.  Plus it was really muggy, as it had rained nearly 2 inches the day before. Really a perfect storm of heat riding.

We headed east to ride to Lawrence since we needed somewhere to stop to get liquids.  We took a little different way, so it was a tad hilly.  But it didn’t matter because we were crawling up the hills.

We got to Lawrence and went to a Kwikshop and filled our bottles with ice and got a 69 cent Gatorade special to split.  Pretty cost effective stop, 37.5 cents each, including tax.  But we ruined that by heading over to Starbucks and getting a double espresso each.  Mine hot and her’s iced.

We then headed back to Topeka north, which is a little longer, but flatter, along the river. Catherine sat on a bit on the way back, since the wind was a tad from the west.  But in general, we rode side-by-side.  Just on the edge of town, maybe about 10 miles out, Catherine said she was out of water, so we stopped again at a gas station.  Same thing, ice bottles and split another Gatorade, this time it was 79 cents, so 42.5 cents each.

I rode Catherine back to Topeka and by then, it was close to 6, it started to seem cooler.  Probably because the sun wasn’t so direct.  We ran into Trudi who hadn’t had enough and was riding again on the bike path or her MTB bike.  I stopped to talk to her and Catherine kept going, in a rush to pick up her mom for dinner.

I rode by my house, refilled my bottles once again and went out for another hour.  By then, my Garmin was reading only 95, but it felt a lot cooler than that.

This was the slowest ride I’ve done in a long time.  I didn’t even average 17 mph.  I think I probably drank 12-14 big bottles, with.  I ate some S caps, these electrolyte capsules when I stopped by my house, but other than that nothing.  I really never felt crampy, which is strange.

I ate two Ally’s Bars.  You might not of heard of these, I hadn’t either, but I got a couple from Trudi after Tour of California.  John Murphy, who rides for United Healthcare, gave Trudi a few for me to try.  Then  a couple weeks ago in Lutsen, Ian Stanford came by after the race and gave me another small bag of them.  It turns out the woman that won Lutsen is Ally and she makes the bars.

Her name is Ally Stacher and she was already on my radar.  The chick is good.  She started Lutsen about the most determined of just about anyone I’ve encountered in sport recently.  She was actually leading the 1000 person group up the first climb.  Brian jump away and that was the last I saw of her.  But she kept that pace going, smearing the women and riding 6:10 for the 99 miles.   That was just 35 minutes behind me and I was going alright.  I’m pretty sure she finished top 20 overall.  I think she is planning on doing Leadville, and if that is true, then if she acclimates properly, I can’t see anyone beating her.

Anyway, her bars are good too.  There is a super long list of ingredients, a couple dozen with nearly everyone of them being organic something.  I’ve only had maybe 4 of the bars so far, but each time I’ve had them riding, I’ve had a pretty good day.  I’ve been looking for something to eat in these longer 100 mile MTB races and so far, these seem perfect.  They are just moist enough that you can get them down without drinking.  They are about the consistency, and taste, of the middle of a Fig Newton.  They are good.  Anyway, I like them but I only have a couple more. There is a link above.  You should try them.

So, today is gonna be hotter than yesterday.  I am planning, sort of, repeating yesterday.  The reason I’m doing this is that I hate not being confident at races where it is hot.  And I’ve found, at this point of my life, that I need to acclimate to heat as much as I do to high altitude.  Maybe more.  And the only way I’ve found to do this is by riding super slow in the heat of the day, building blood plasma.

This will be the last day though, because I’m heading out to Colorado to  acclimate to altitude. And most likely, I won’t be running into much heat there.  I am going to be in Steamboat Springs, at the Tour de Steamboat and was then thinking about maybe driving to Bend Oregon to do the Cascade Stage race.  That is iffy though.  It is 1000 miles from Steamboat to Bend and I only have two days in between.  Plus, Bend has a 16 mile TT and I try to avoid those.  But, a stage race would do me good.

Okay, enough of this.  I can’t write down everything I’m thinking right now.  I do have some stuff to do before I leave tomorrow. The heat index is supposed to be 115 today.  I’m not really diggin’ doing yesterday all over again now that I really think about it.

The bars are wrapped in Mylar, like Powerbars, but are way easier to open. 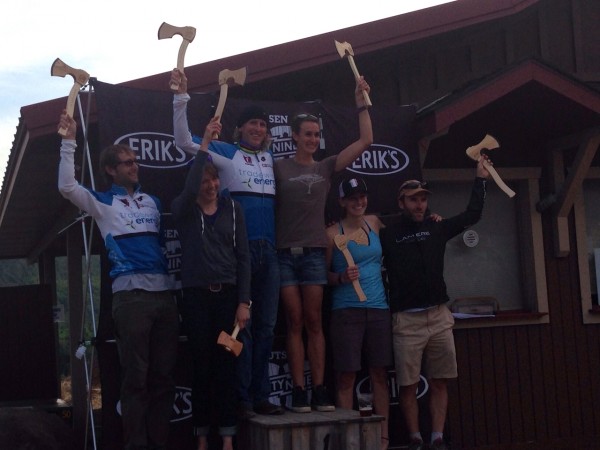 The podium of the overall men’s and women’s winners. Ally is the girl standing next to me on the top step. 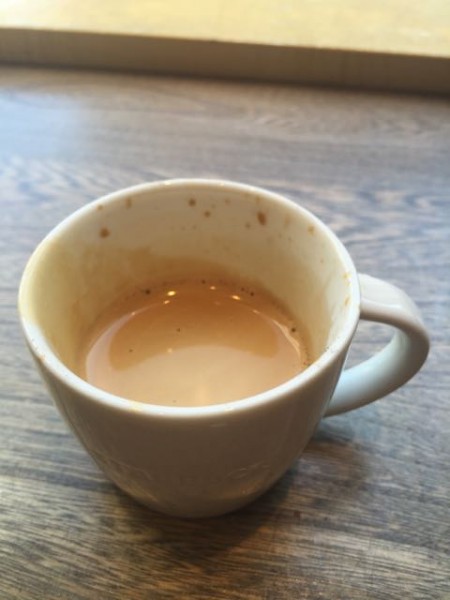 I heard having caffeine when you do long slow distance helps burn fat. I’m going with it.  But, both Catherine and I were feeling a little weird after about 1/2 an hour after drinking it.  I call it a coffee bonk.  I get it sometimes after riding, then stopping for coffee and then riding again.  It is sort of a dizzy/bonky feeling that passes.

13 thoughts on “Pretty Proud of Myself”