I was just laying in bed, dead asleep, and wam, my right calf seizes up cramped and I can’t get it to release.  I grab my  calf, trying to move my foot to stop the pain, but it seems to go on forever.  Finally, after what seems like a minute, it finally eases up and I can try to breathe again.  Shit, what a horrible way to wake up.

I haven’t cramped this year racing, but I make up for that in my sleep.  I’ve been having these weird calf cramps, which I’ve never had before in my life, plus some minor foot and hand cramps.   I nearly forget about them and am not sure what to do about them even if I didn’t become so forgetful.  This morning was so severe, I don’t think I’ll be forgetting about it anytime soon.

Anyway, this was probably a by-product of racing in the humidity, and somewhat heat, last night in Nevada Missouri.  It wasn’t all that hot at 9 pm, when the race started, but it was super humid.

It is only a couple hour drive to Nevada from Topeka.  All interstate.  Bill, Catherine, Trudi and I drove down in my van.  It was fun having Catherine back in the fold.  She was excited about being racing again and the conversations bounced all over the place.

Her race was at 8 and ours started at 9.  This was Bill’s first race back in 6 weeks, since he collapsed his left lung at the Tour of Kansas City.  He really hasn’t done any real intensity, so he knew he was going to be hurting somewhat.

The course was awesome.  A real small town criterium.  12 corners in a little over a mile.  They actually had light sent up on some of the corners, but we were still riding in and out of darkness.  They had a horn band, which was super cool to race in front of.

Catherine rode pretty good.  She sprinted, and won, a couple primes, then during the final sprint, she jumped way too early, mainly because of lack of confidence because of lack of racing, and ended up dying before the line and finished 2nd.  She’ll get her confidence back and some more fitness, but until then she’ll have to pay her dues.   She really hasn’t raced much for two years, but it comes back so quickly.

I was worried that there wasn’t going to be many guys in the 1/2 race.  But I think a bunch of master’s rode two races because nearly 60 guys lined up in the dark.  That was a nice size field for the course.  I think Bill was a little relieved because there were plenty of places to hide.

The race started pretty quickly and it stayed that way for the full 70 minutes.  A couple corners were a little tricky.  One in particular where so some reason there was a puddle and about half the street was wet.  I was having real problems with that corner the first few laps.

There isn’t a ton to write about, other than it was super fun.  The field stayed pretty lined out all night.  I don’t think that there was a crash either, even though 60 guys turned 12 times for 27 laps.  If you do the math, that is 19440 corners at night.

A 3 rider break was away for about 1/3 of the race.  I was a bit worried that it was going to work, but they never got more than 20 seconds or so.  We caught 2 or 3 laps to go.  There were quite a few primes.  Colton Barrett, TexasRoad House, won  most of them.  He missed out on a couple, but he was pretty dominate.

With 2 laps to go, they rang the bell for a $250 gambler’s prime.  The field really didn’t know what to do.  It stayed bunched up the final corner, which was a long ways from the finish, like 4 to 500 meters.   We went around the corner and it spread out.  Colton took the right side and sprinted.  Then he didn’t wait after the line.

I was maybe 5 guys back sitting on Dennis Ramiez, Gateway Harley-Davidson, I think.  He yelled to his team mate, Connor Brown, and told him to drill it.  Connor was pretty incredible and kept the throttle down and pretty much single-handedly chased Colton down.  That kid is really good. We caught Colton with less than 1/2 a lap to go.

That is when it sort of started going south for me.  It eased up some and I got a little shuffled back with about 3 corners to go.  I had to jump a couple extra times and ended back on Colton’s wheel heading into the last corner. And this was when I completely blew it.

We went into the last corner and I lost Colton.  Well, I didn’t really lose him, but he put a couple bike lengths on me and I was in the wind.  I made a very bad decision and left my wingman.  There was a big glob of guys to my left, so I moved over there to draft.  Colton was sprinting away up the right and I was in line on the left.  But guys were coming up on both sides and I couldn’t really get out.  So when I finally got an opening, I jumped.  But it was probably 100 meters too early, because by the time I got to 100 meters from the line I was done.  I hate long sprints.   To excel in a field sprint, I need a corner in the last 200 meters, shorter preferably.

I was just trying to get to the finish and a two or three guys passed me right before the line.  I ended up 9th, which is right about where I deserved to finish.  Bill started the sprint on my wheel and a couple more guys passed him so he finished 14th.  There were 17 paying places, so he finished in the money.

Colton Barrett won, after winning the last prime and time trialing 1/2 the last lap.  He made us look pretty silly.

By the time the prizes were done, it was nearly midnight.  We stopped to get some take-out and drove.  We didn’t get back to Topeka until after 2am.  After unpacking, it was nearly 3 am.

I felt pretty good going to sleep.  My right knee was good and I had a endorphin buzz left over from the effort.  I had nearly 70 miles for the day, counting an afternoon ride and warm-up.  It was a good day all around.

Then this morning, harsh reality check with the cramp.  My calf is still aching from the cramp, sitting here writing this, watching the TTT at the Tour.

I’m hoping to ride a good while in the heat of the day today.  Maybe 4-5 hours leaving after noon.  I am really suspect in the heat and there is no way to prepare for heat without subjecting yourself to heat.  I hate skipping the race today in Nevada, but Catherine needed to get back last night and that was the deal we made.  Plus, a longer ride in the heat is probably better for me in the long run. 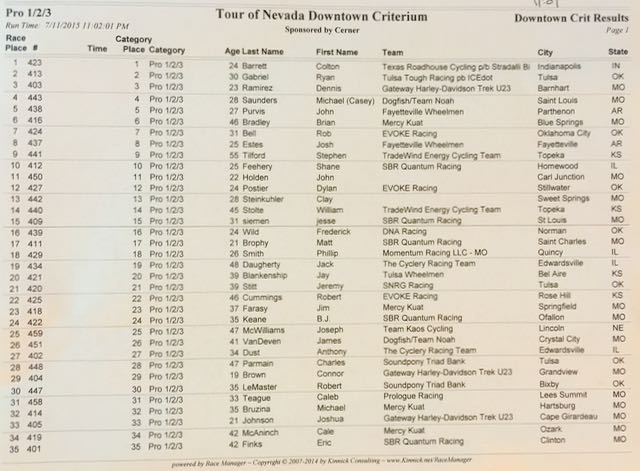 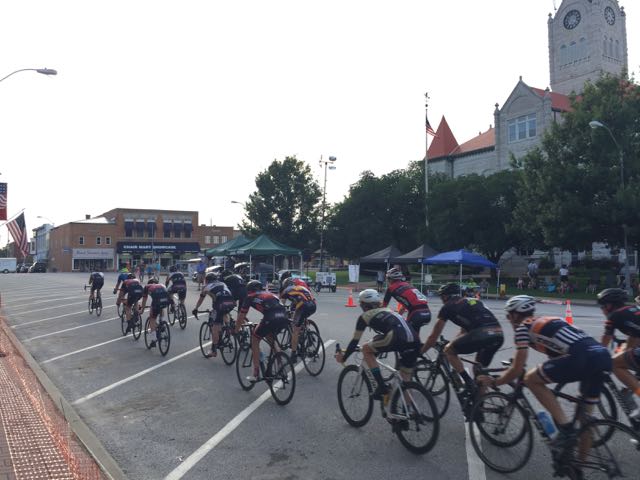 Racing in small towns, around the town square, is super fun. 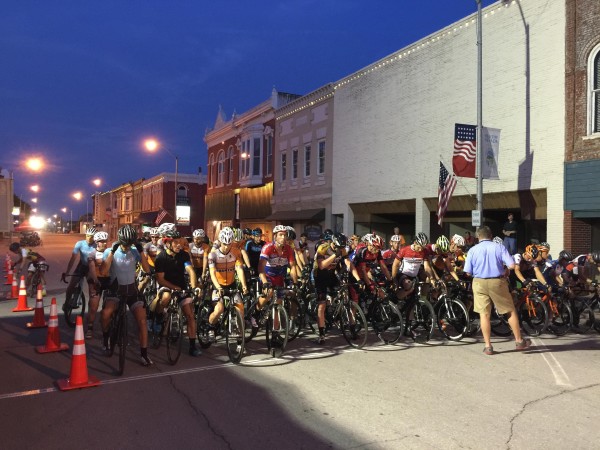 Lining up just at dark. 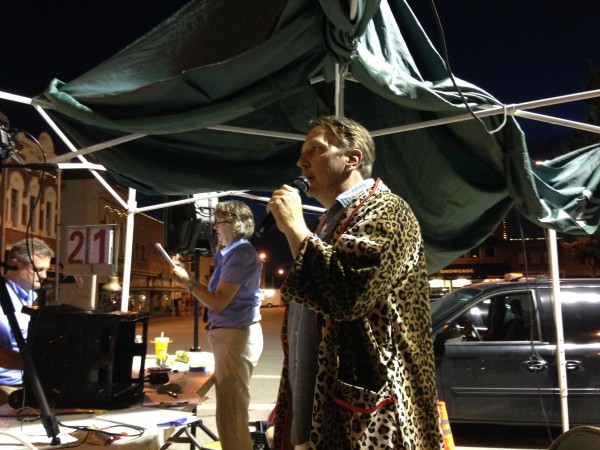 My friend, Aaro Froese, having the announcing duties last night. He wears many different hats at bike races. 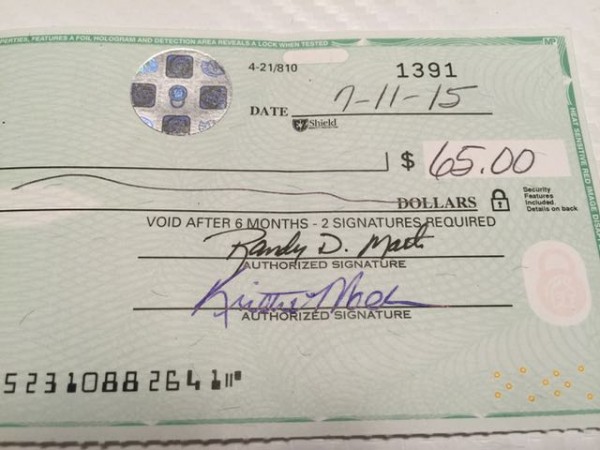 The prize checks had a little extra watermark thing on them. I’ve never seen something like this before. It was pretty cool. I wonder what it is. Something for fraud I’d assume.  It is amazing I can win money for doing something so fun.

TO REDUCE RISK DURING OUTDOOR WORK… THE OCCUPATIONAL SAFETY AND HEALTH ADMINISTRATION RECOMMENDS SCHEDULING FREQUENT REST BREAKS IN SHADED OR AIR CONDITIONED ENVIRONMENTS. ANYONE OVERCOME BY HEAT SHOULD BE MOVED TO A COOL AND SHADED LOCATION. HEAT STROKE IS AN EMERGENCY… CALL 9 1 1.

This is the weather forecast for today.  Heat index of 110.  If I thought I had trouble last night cramping in my sleep, tonight should be even better.