Luca Paolini was removed from the Tour de France after a drug test that turned out positive for cocaine.  Is this a surprise?  Yes.  Not many guys get popped for cocaine.  Tom Boonen had a positive test a few years back, but it was out of competition, so he didn’t serve a ban.

Big difference here for Luca.  If his B sample turns up positive, then he probably will serve a 4 year ban, unless he can come up with some explanation why it is in his system without his knowledge.

The weird thing here, and the most interesting to me, is that when asked about Paolini’s cocaine positive,  Katusha spokesman Philippe Mertens said, “We’re very surprised because cocaine is not a substance that improves performance.”

I don’t know this Mertens guy, but he maybe should study up on drugs cyclists have used in the past to aid performance.

I wonder if Philippe has ever heard of pot belge, or Belgian Pot?  It’s been documented that it was rampant in the professional peloton until recently.  It is a combination of amphetamines, cocaine and heroin.  They probably just add the coke for a little extra high, since according to the Katusha team, it doesn’t improve performance at all.

When goofball spokesman for teams make asinine statements when their riders have drug testing issues, then it makes all the circumstances surrounding the positive seem more screwy, thus less believable.

It’s the Belgian beef tact that Paola Pezzo took when she turned up positive for nandrolone.  Back then, in the 90’s, the spokeman for Trek said that it was a mystery, since nandrolone was not a substance that would benefit a cyclist.  He probably should have done a little reading too.

And then Luca goes and apologizes for embarrassing his team on such a worldwide stage,even though he has professed his innocence.  Who apologizes for something they believe is completely wrong?  I wouldn’t, for sure.
Anyway, it is a weird positive  drug test.  I think he finished in the 170’s on the stage he failed the drug test on.

Luca Paolini is 38 now, so if this all goes badly for him, then he’ll be Chris Horner’s age by the time he could race again.  I guess he’ll have to rest on his Gent-Wevelgem classic win this year. He can always look back on that with pride, for riding so honestly and clean his whole career. 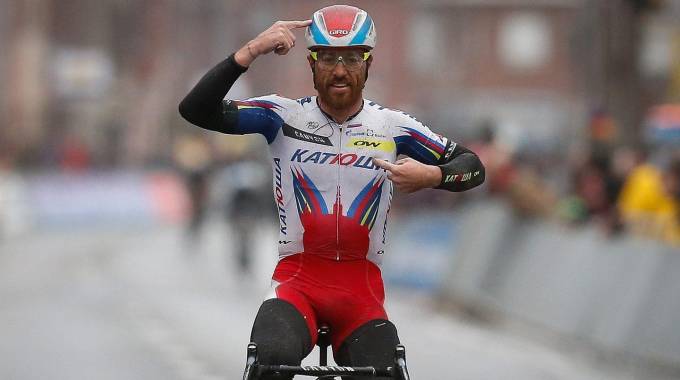 Luca’ heart might have been beating a little quicker than normal on stage 4 or the Tour this year.