I read a good article that Bauke Mollema wrote about the Tour and riders safety.  It is spot on. And since the Tour starts tomorrow, in Holland, where it could be crosswinds, this is a good time to address the elephant in the room.  The riders and the team managers need to address the issues with all the crashes that have historically happened early in the race because when you really look at the situation closely, they themselves have escalated the danger of the race.

I don’t disagree with anything that Bauke mentions.  He is correct on all observations.  The danger exists because there is not enough space for all riders at the front.  And the team directors are on the radios telling all their riders to be at the front, which again, is impossible.

When I went out to Colorado three years ago and “witnessed” some pre-race testing of the Garmin team, from Jonathan Vaughters’ invite, a lot of what Tom Danielson and Christian Vande Velde talked about was being scared shitless about the first week of the Tour.  Could they survive the carnage that was going to for sure happen?  I never remember, ever having these thoughts in any race I started.

Everyone recognizes the problem, just no one or no team wants to say uncle and change the way they ride.  Everyone has to change their tactics.  Most places during of the race, or coming into technical sections, there isn’t enough room on the road for all 200 guys.  So a lot of them end up on the ground and out of the race.  This is a relatively new phenomenon.  Definitely since the inclusion of the race radio.  The GC riders, and their teams, need to back off at the finish of the races. There isn’t enough space for all the sprinters, plus their leadout trains, and all the CG riders teams.  It is physically impossible.

Get rid of the radios and let the riders figure out how to stay safe on the course.  A big part of bike racing is being able to read the race as it happens.  That part is fast becoming history in this new age of electronics.  To the riders detriment.   The team directors need to quit playing Russian roulette with their riders.  The sport is dangerous enough on its own.

Here is a link to Bauke Mollema’s article at Cyclingnews.  I agree with it nearly 100%.  I’m not quite sure about moving the 3K rule out to 10K, but other than that, it is spot on. 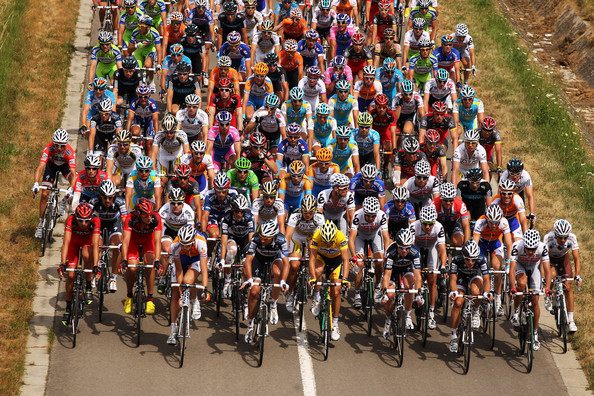 There is obviously only so much road for the peloton to use.