Yesterday I bit the bullet and drove down to Tulsa for the last day of Tulsa Tough.  It took a fair amount of initiative to do it, which is sort of counter intuitive, since I am a bicycle racer.   But loading up my stuff and driving nearly 4 hours to a race that is most likely going to be held in a down pour, took a bunch of personal fortitude.

I couldn’t convince anyone else to go with me.  Most the guys from around here were already down there and Bill is still recovering from his broken ribs and collapsed lung, while Brian was on the fence, but then when it said 70% chance of rain, he decided to ride gravel locally.

The course is less than a mile, with one short climb, Crybaby Hill, which is more like a rave than a section of a bike race.  And the final corner is off-camber, two man-hole covers and just a couple hundred meters from the finish line.  Needless to say, it’s a little tricky, especially when it is wet.

I haven’t been riding very well the last few days since returning from Colorado.  I was, and still am, emotionally drained.  That is part of the reason I just made an executive decision and went through the paces to race.  I know how to do that and the process has certain simplicity that is easy for me and it takes little mental strength.

So, Trudi and I loaded up and started the drive directly south.   We drove through a few isolated showers, but it didn’t stress me out too much.  I knew that it was going to be hit or miss for rain at any particular time in Tulsa.

Upon arriving in Tulsa, near the course, I started getting a little nervous.  It was in the upper 80’s and so humid.  Plus, getting near the course, there were 1000’s of cars and I knew parking was going to be an issue.  I stopped at a Quicktrip to get some ice and it was sold out.  And there were tons of oddly dressed people making their way to the race.  It looked more like Halloween than a bike race.

I found a place to park, semi-shade, which relieved a ton of nervousness.  I got my bike out and went over to get a number.  I did a couple laps of the course and my legs and most of my other parts, felt pretty good.  That was reassuring.

I rode about 10 miles south along the river and then came back to camp out at the start.  The women were racing and right when I got back, they were going for a $2500 prime.  The women have an equal prize list of the men, plus the primes, which were much more than the men. That seems a little off, since there were 3X as many guys in the Pro 1 race than the women’s race. Plus there was a full 1/2 field too, so there were close to 250 Pro 1/2 guys there.

Anyway, with about 10 laps to go, storms moved in and the carnage began.  Riders started falling on the last corner.  Then lightening, so they neutralized the race.  By then, I was under a pop-up tent.  It was pouring.

So, 30 minutes later, they finished the women’s race.  Erica Allar beat Samantha Schneider  to the line.  All the women made it thru the final corner on the last lap incident free, which was nice.  I hate watching riders fall right before starting a wet criterium.

The men then rushed the line.  I had went to the porta-potty one last time and when I came out, they were just opening up “the gates”.  I started riding fast to the start/finish line and some idiot official was trying to stop about 1/2 the field from just riding to the line on the road and grabbed my arm as I rode by at about 15 mph.  He nearly threw me on the ground.  I told the dude to get his “fucking hands” off of me.  Then I “calmly” explained to him that there is no place in cycling for official touching riders, other than holding them up for a free lap, or at the start of a time trial.  I could go on and on about this, but it really turned out to be a non-issue.  It was a non-issue, because they decided to do a neutral lap at the start, which the field was adamantly against.  No racer wants a neutralized lap at the start of a rainy criterium.   But, again, a non-issue.

The road was pretty wet and the first few laps were tense.  The final corner was tricky of course and trying to scrub speed and the downhill, to negotiate the corner was pretty much more intense than climbing the hill on the other side.

Eventually, it kept drying out and the course just got better.  At the pit, they kept throwing riders in virtually every lap.  Sometimes just one guy, but more common was a group, sometimes huge groups, of what seemed to be nearly 1/2 the field.  I personally only saw one rider fall all day, which probably reflects I was riding towards the front of the field when the course was treacherous.

The last 1/3 of the race, the course was pretty dry.  At least dry enough to take the last corner at full speed.  I felt pretty good, never really suffering, which was nice.  I was going to try for a couple primes, but it was super difficult hearing the announcers, Dave Towle and Greg Saunders.  I finally realized it was going to be a field sprint with about 10 laps to go, so I just tried to stay out of trouble.

I really enjoy the last couple laps of hard criteriums.  Positioning is key and I know where I need to be.  The key is getting there.

I was pretty good, but on the last lap, I got shuffled back heading into the hill.  I knew I was screwed.  I got passed by a ton of guys and had to make a huge effort to get back into the top 15.  I passed a few more guys, but started down the hill to the last corner in horrible position.  I have only passed one or two guys from the last corner to the finish in all the times I’ve raced the event.

This year was no different.  I went around the last corner in 12th and finished 12th.  No what I was hoping for, but it could have been worse.  There were a lot of guys riding around with huge holes in the shorts, so I have to consider myself mildly lucky for having all my skin.

I got the chance to catch up with Tim Carrigg, the go to guy for the race.  He is personally responsible for this race being so successful all these years.  The race already has sponsorship for the next few years.   This year it was bigger and better than ever.

The drive back was nice.  I was all full of endorphins from the race and I like driving at night, so it was enjoyable.  We didn’t get back to Topeka until after midnight.  It was easy to unpack, since it was just a one day race.  I was still a little wound up from the race, so scrubbed my shoes, washed my clothes, etc.  I didn’t clean my bike though.

The day was exactly what I needed.  I needed to race in the rain, to get some self-confidence back.  It was easy peasy.  I had no issues.  Plus, it is always nice feeling good.  The course was hard and Crybaby Hill was out of control as always.

I did get wacked a couple by spectators when riding towards the end of the field.  I also grabbed a few dollars from the crowd, cyclo-x style, so was already in the positive no matter how the end turned out.  I wish I would have had a little better luck not getting shuffled back at the end, but I find historically, that happens when you aren’t good enough to control your destiny.  I felt like I was better than 12th, but that is where I finished, so the result is the result.

Overall, it was a super experience and one I’m already looking forward to for next year. 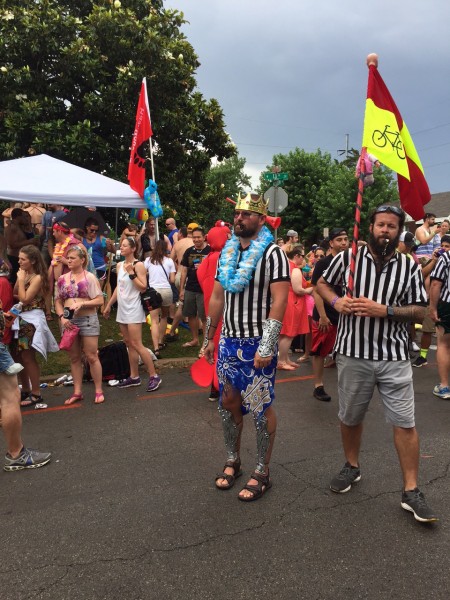 Crybaby Hill is a street party. 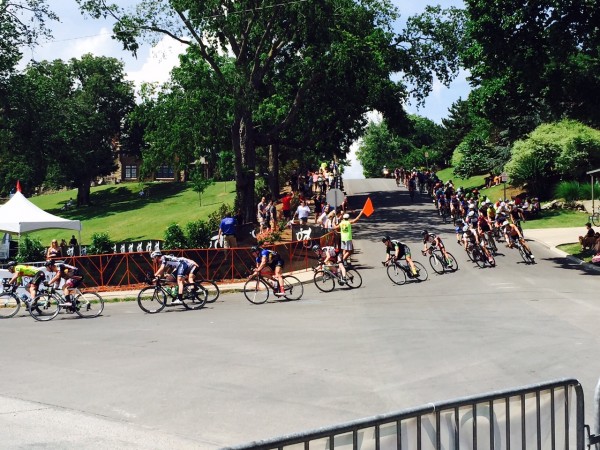 The 1/2’s going through the final corner. Off-camber and a little trick when wet. 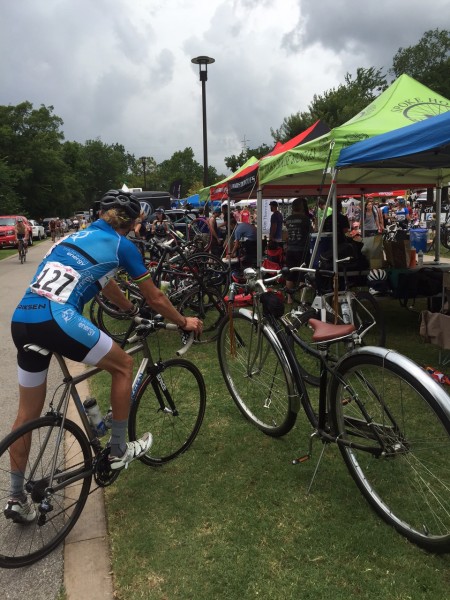 The expo area was hopping until the storms moved in. 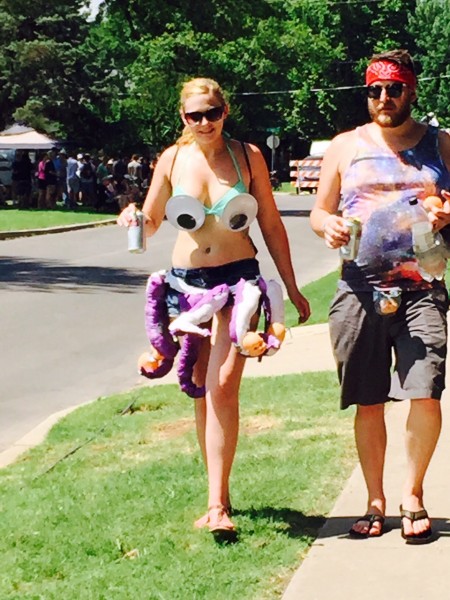 The people walking to the race added to the pre-race “excitement”. 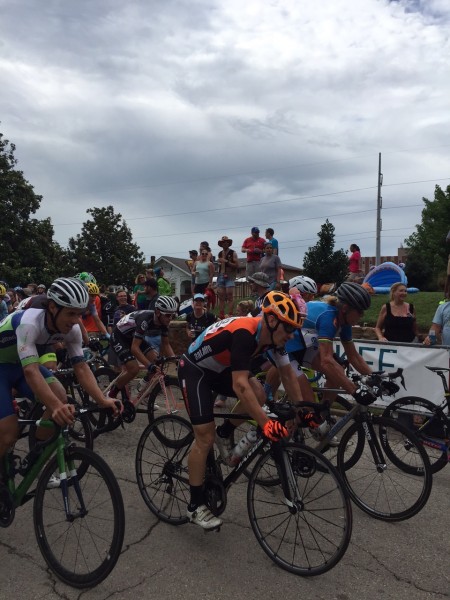 Here I am riding next to Chad Cagle, who is a Tulsa local. Chad had a great weekend, finishing 3rd on Saturday  night and 5th yesterday. 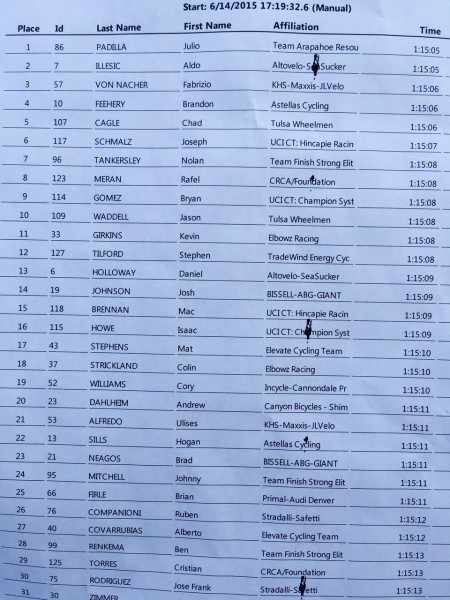