Yesterday was Snake Alley Criterium.  I’ve been doing this race for a long time, for close to 20 years.  The race really hasn’t changed at all during that time.  It is the same course and same vibe as it always has been.

The course is less than a mile around and is pretty much up hill and downhill, with a little respite of flats breaking it up.  The main feature is a switch back climb on brick.  It is hard.  Then you bomb down a 3 corner descent, a little flat and then back up the hill.

I’ve won the race a couple times, but haven’t really been in contention recently.  And that was the case again today.  I was okay, but not good.

There were some new guys here today that didn’t race the 104 mile road race yesterday.  Some of the Hincapie kids that did the Tour of California, plus Logan Owen who also did the ToC. There were over 120 riders starting the race, so the race to the start of “the Snake” is important.

The race started fast, as always.  I’m usually one of the first guys up the hill, but was going to try to start easier this year since I have some question marks about form.

I got a little gapped off from the front group on the 2nd lap, but got reattached pretty quickly.  I actually didn’t feel too bad the first 12 laps.  The race is only 20 laps, 18 miles, but it seems like a lot more than that.

There was a lot of attacks, but nobody seemed that interested in trying to put in  a real effort. With about 8 laps to go, there was a split and I ended up on the bad side of it.  10 or 11 riders got off the front and I was in a group of about the same size.  I was feeling alright, but not good enough to bridge the small gap.  We were just 10 seconds off the back of the front group what seemed like forever.

I didn’t really see what happened off the front.  I guess that Chris Uberti and Chris Winn, the rider I was with in the road race on Friday, rode off the front and had a really, really close sprint. Like nearly tied.  Uberti ended up winning over Winn.  It is nice that guys I race against a lot are the guys winning hard races like this.  This is considering that a bunch of new guys that had ridden the Tour of California, that didn’t race the day before, showed up.  Guess my Daniel Holloway pick from yesterday was wrong.  I talked to him after the race and he said that it was a little too punchy for him and he felt he was behind where he was last year.  He says that after winning 4 out of 5 Speed Week races.

I pretty much fell apart with a couple laps to go.  I was racing for 11th, but ended up 19th.  I didn’t really care about the result.  I tried hard, but pooped out.  If I would have been just a tad better, or it would have been a tad cooler, I might have finished in the top 5 or so.   Might have, that is really just a would have/could have deal.  I finished 19th.

I was a little tired riding before the race.  I haven’t raced on the road for pretty much a year, so I was sort of beat from the race on Friday night.  I was doing a lot of work on Friday, mainly because I am trying to use these races to get some form.  Most of these guys have raced lots, like over 20 days, or maybe a lot more, this year.  You can still count my race days on one hand.

You know, I think I finished 19th last year too.  And I was in much better shape.  Weird.  I think I might have tried harder this year.  I think the field was better this year than last, so it was a better result, I guess.

I can’t complain.  I got to ride the whole distance and could have been much worse.  I got 20 intense efforts in and am not worse for wear.

In an interesting turn of events, the Drapac UCI team, from Australia, who just finished the Tour of California, raced the event, then someone protested and the officals booted them out of the results. I think only two of them finished, but it was weird.  My stance is that if they are enforcing that rule, that at UCI Continental Team can’t race local races, then they shouldn’t have let them start. And if they do let them start, then their results count.  My real stance is that the rule is stupid. UCI pros should be able to race any race they want and restricting them is just plain wrong.  I would welcome Alberto Contador at Snake Alley, if he would choose to come.

Today is a criterium in Muscatine Iowa.  It is a nice course with a hill in Weed Park.  It is a really good race to ride just about as hard as you want.  Sitting in is pretty easy, but riding at the front, or off the front is hard.  It is supposed to rain all day in Muscatine, but I think I’m going to go race anyway.  I’ve done this race in the rain and it is fairly safe.  Just two corners that are tight and the rest is pretty wide open.  If it is really sketchy, I can always stop. 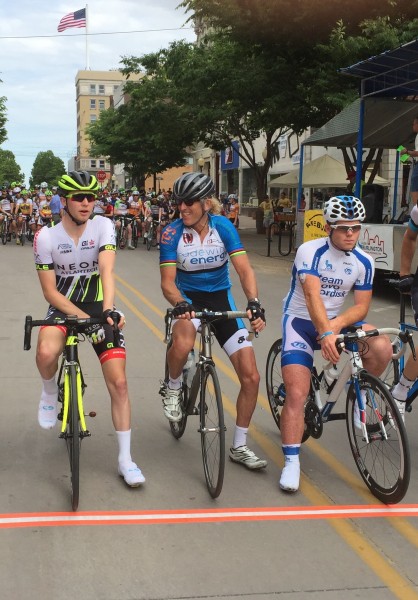 Talking to Logan Owen at the start. Check the legs out on the rider to my left. He has the biggest calves of any rider I’ve seen since Sergei Nikolaevich Sukhoruchenkov (1980 Olympic games Gold medalist.)

The start of the race.  It is a drag being at the back early. 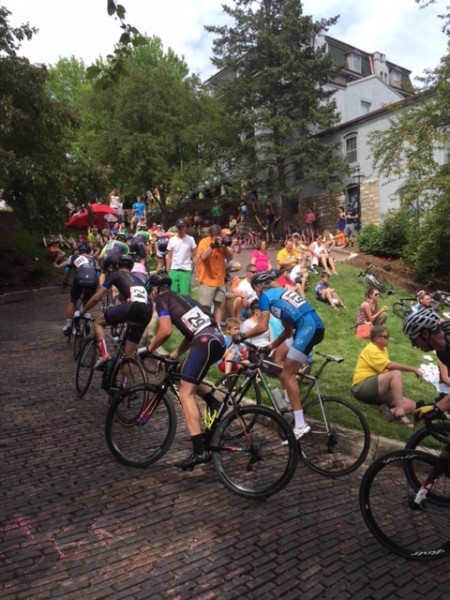 It is kind of a log jam most of the time on the climb. 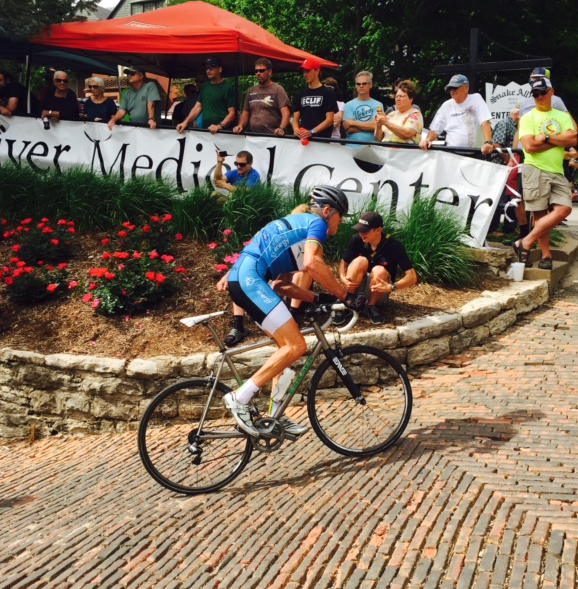 This sort of shows how steep the grade is. 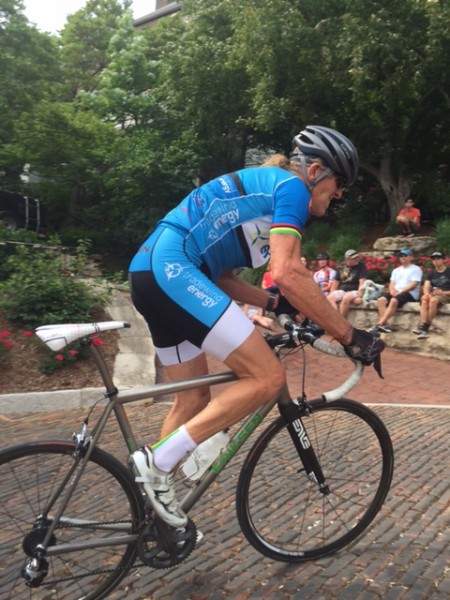 My arms were trying to make up for the lack of power of my legs. 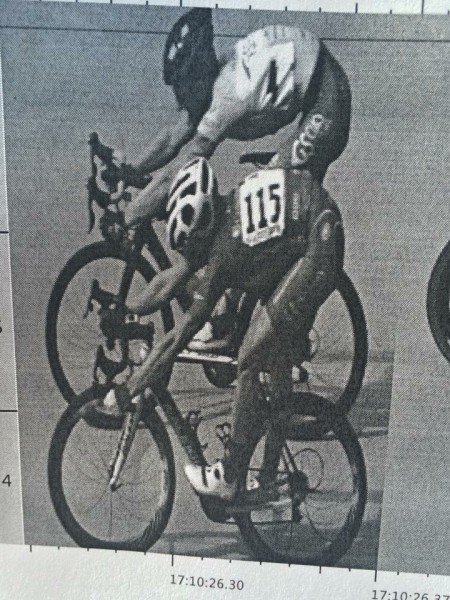 This is the photo finish. Pretty close between Chris Uberti and Chris Winn. 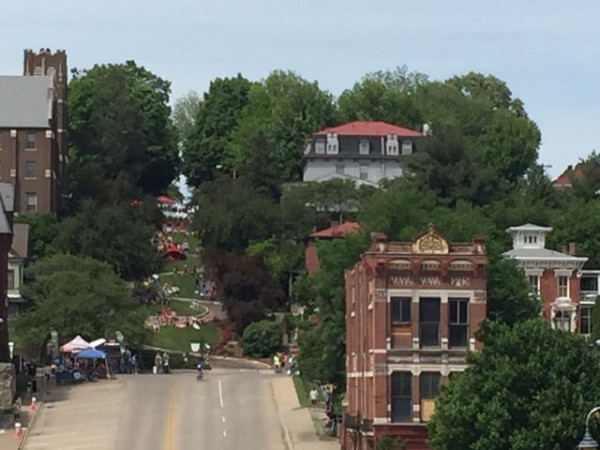 This shows you the lead up to the climb. 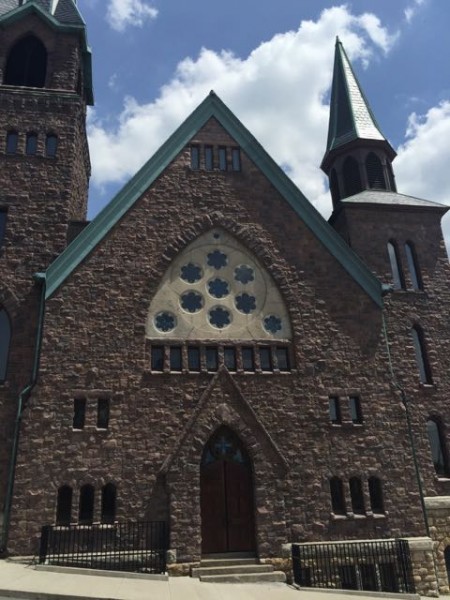 There are lots of beautiful churches in downtown Burlington. 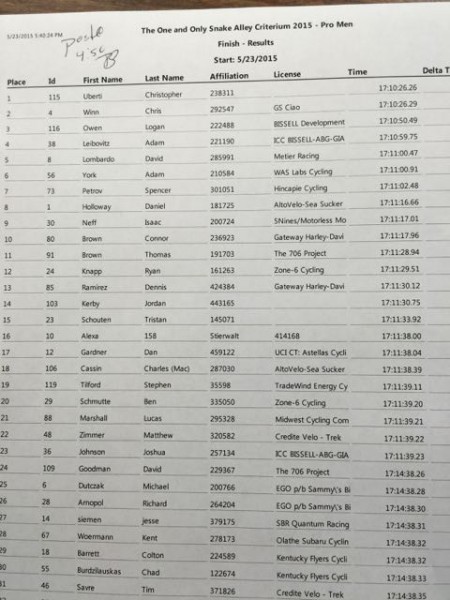