It had been 11 months and 10 days since I last rode a criterium.  That is the time since I broke my left hip at a criterium in Davenport Iowa on May 27th of last year.  I went back and read the post and am mildly amused how optimistic I was about that injury.  I said that it wasn’t even going to be 2 months for the recovery.  I was off by a lot.  I could hardly walk at 2 months.

Anyway, it is going on close to a year now and I’m still in the recovery process.  I have to admit, there are some days I don’t even think about it, but most days, something goes a little screwy down there at least once.

Anyway, I finally raced on the road, a training criterium, but was just a criterium.  I drove down to Texas, planning on going to Austin, to race the Driveway Series Criterium last night, but it looked like it was raining in Austin and it wasn’t going to rain further North, so I made the call and did the Fair Park Criterium in Dallas.

And it was the right call.  I have to admit, I was a tad bit worried how I was going to be.  I’m not really riding all that well and haven’t done any speed work in ages.  It was fine.  It was fine because of the course and the field.

The course is at the Fairgrounds and it is a long 4 corner rectangle.  Wide open corners and a really safe race, which is great for a training race.  Ginny King puts on the race and has been asking me for ages to come by and race.  I’m so happy I finally made it.

30 minutes before the start, during the B race, it started raining a little.  But just a little.  I told myself I can’t be selfish and race in the rain.  It wouldn’t make any sense to do that just now.  But, after doing a lap, it was all right hand corners, so my left hip was sort of out of play.

There were close to 80 guys in the A race, which I was happy about.  I thought I needed a lot of places to hide, but I now looking back upon it, I didn’t.  I was planning to just ride around in the group, which is exactly what I did.

I don’t have much to really report.  I kind of just sat in the field and did a ton of accelerations.  I wasn’t as pitiful as I had anticipated and really never got winded.  Brett Crosby rules this race and he put in a few big surges off the front.  It was a great course for a training race.  Easy in the field, extremely hard in the front in the wind.  Perfect.  Lots of guys said they were sorry to hear about Bromont, which was super nice.

They did abruptly ring the bell about 10 minutes before the scheduled finish and called 1 lap to go.  I had seen some lightening and it was looking like it might storm.  There were 8 or so guys just a bit off the front then and some of the guys in the field didn’t really hear that it was one to go.  I just went hard enough to stay at the front and finished somewhere between 10-12th I think. Not that it mattered, but I wasn’t ready for the race to be over.  It was too fun.

Anyway, it was nice knowing that sitting in a field, even though it was just a flat, wide open criterium, wasn’t hard.  I thought I might be a little nervous about the bike handling, but that wasn’t an issue at all.  Weird as that is.  Guess the saying, it’s just like riding a bike applies here. 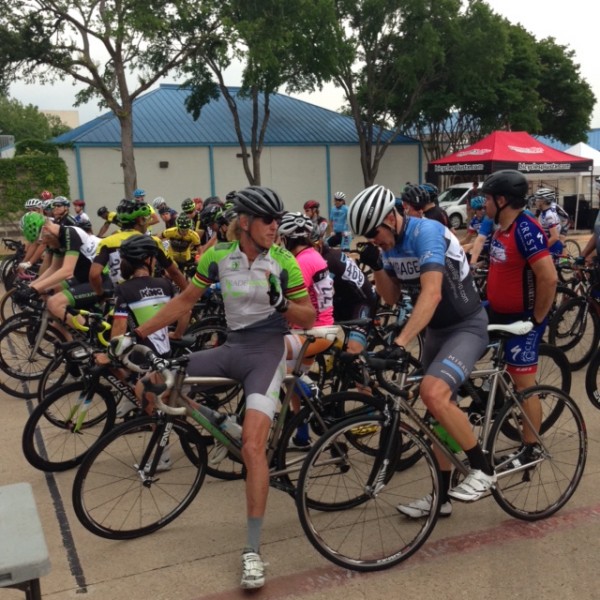 11 thoughts on “Back in the Saddle”