Today is going to be long.  I’m still feeling yucky.  I have an almost impossible time believing that I raced a 100 mile gravel road race last Sunday.  Now it is supposed to rain all day, again.

Yesterday it rained most of the day.  It cleared in the late afternoon and I couldn’t stand it anymore.  I got dressed an rode 10 miles.  It was for sanity sake.  I actually was pedaling aright from mile 6 -8, but by 10, I was done.  It got me thinking about how Bromont now feels on his “walks”.  He walks about 50 meters twice a day now.  I can see it in his eyes how disappointed he is in himself.  I tell him it’s okay and he’s a good boy.

It was crazy watching the US Criterium Championships yesterday.  Think I’ll post about it tomorrow.  Then Amstel Gold today.  Bike racing is so interesting to me because it is very unpredictable.  Americans like predictability in sports.  Not me.  I like getting watching athletes get rewarded for well thought out risks.  Cycling has a lot of that to offer.

Catherine came back to town to visit her mom and ended up making an offer on a house.  So, officially, she is moving back to Topeka from Seattle.  I think Seattle was just too much city for her and Keith.  I have to admit, riding there takes a lot of effort.  It is not like you can ride a couple miles and be out on pretty abandoned county roads like here in Topeka.

If I don’t feel better by tomorrow, I should probably go to the doctor.  I don’t really have a regular doctor.  My guy quit and started working for a hospital and I don’t like the other people they sent me to, so I usually just go to the clinic place.  You don’t ever see the same people, but at least you don’t have to make an appointment.

My team mates went down to Houston to do the MS150.  It rained there yesterday and they cancelled the first day.  I thought that was weird, but there are over 10,000 people doing it and most of them are on their limits just riding the 80 miles, so doing that in a storm wouldn’t be wise.  And it is just a charity event.  I’m not sure what Brian, Bill, Matt and the other guys did.  I bet they just did the ride from Houston to the ranch house, where we stayed last year and then rode today as normal.   It was a warm rain I’m sure.  It is supposed to be 90 there today.  Probably a little muggy.

Okay, now that I think about it, it’s not really a bad day.  Gonna hang with Bromont and keep him company. 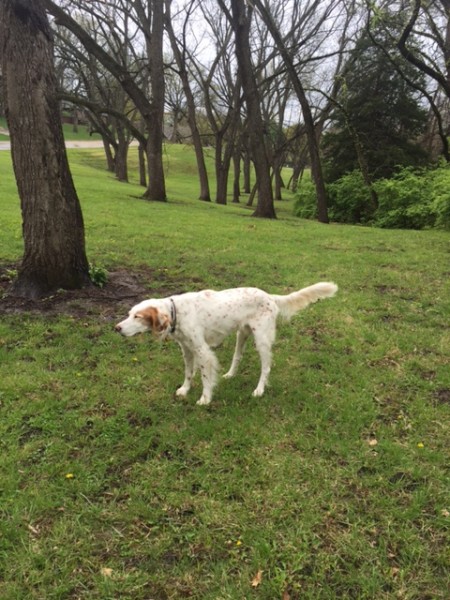 Our walks are sometimes more standing than walking now. He doesn like to sniff the air.