I finally did a gravel road race yesterday.  Gravel road racing seems to be all the rage nowadays.  I’m not exactly sure why that is, but I like it.  I’ve been riding gravel for the past 3 decades, so racing on gravel seems to be a no brainer.

I think the DK200, Dirty Kanza, really put gravel road racing on the map here in Kansas.  It started small, just a few years ago, and now is the biggest gravel race in the country.   The race yesterday, the Gravelluer’s Raid, was an inaugural event.  It was only 100 miles, a more reasonable distance compared to the 200 miles of the DK.  But it was a very difficult 100 miles.

Yesterday I woke up to thunderstorms.  And it looked like it was going to rain for a few hours.  And it did.  The race was supposed to start at 8 am, but it was downpouring, but more important than that was the lightning.  The last storm moved through and the race got underway a little after 9 am.  The storms scared some of the 150 starters off.

The race, The Gravelluer’s Raid,  is a single 100 mile loop that starts out riding the first 5 miles on a levy along the Kansas River and then heads into the hills north of Lawrence.  And it is hilly.  My Garmin said it was a little over 8000 feet of climbing and it really seemed like more.  Lots and lots of short steep pitches.

We cruised out the levee and after coming off, there is a short hill.  Brian Jensen, my team mate and last year’s winner of the DK200, rode up the hill pretty quick and I jumped up to him.  And that was all she wrote.  The rest of the day it was just Brian and I.

I was surprised how soft the gravel was.  We had a lead vehicle and the tires tracks were sunk into the road an inch or so.  The tread marks looked like the fast line, but it was super slow, much like racing a cross race in the mud.

And it was long.  There was a ton of resistance.  Mainly from the mud, but also there was a ton of deep new gravel.  Not to mention the wind.  I was sitting on Brian on one flat section and doing close to 400 watts and it was flat.  I have no idea what wattage he was doing riding into the 25 mph headwind.  I was drafting.

Anyone that has had the pleasure of riding in a break with Brian Jensen knows how difficult it can be.  Brian doesn’t really know how to ride easy.  I say that, even though this might have been the closest I’ve seen to him doing that.  He knew that we didn’t have a shot at riding a fast time.  He’d pre-riden the course a couple weekends ago in 4:53.  That is close to 21 mph, just out training.  But, we weren’t going to be close to that.  So, in reality, we were just trying to get to the end unscathed.

We kept up a pretty good pace the whole day.  I had a normalized wattage average at 50 miles of 335 watts.  My power meter is questionable, but low if anything.

Towards the end, maybe 10 miles out, Brian asked if we were just going to sprint.  I told him I had no intention of sprinting.  That it was a race in his local town and that he could win.  Plus, it is his birthday today, (Happy Birthday Brian).  But, I told him the deal was off if he dropped me.  That was probably a mistake.  As usual, Brian started riding harder after that.

I had an okay race.  I was pulling fairly even with Brian most of the day.  I sort of fell apart with about 5 miles to go.  Both my legs felt like they were going to cramp.  I was lucky it was so hilly, because when I stood up, it relieved the potential cramps.  But, on the levee, the last 5 miles, it was ugly.

It was directly into the wind and Brian was keeping it close to 20 mph, which is pretty incredible considering how hard the wind was.  Brian swung off after his first pull and I just said, “Are you kidding me?”  So, he kept going.  I came through the rest of the way, but was going a couple mph slower than Brian for 1/2 the time.

I was happy to be done.  It took nearly 5:15.  I might of ridden through the cramps, but I was pretty done at the end.  There is absolutely no way I could have ridden another 100 miles just then.

My hip was just a tad sore.  My neck was tweeked.  Probably because both my shoulders are jacked.  If that is the extent of my woes, then I’ll take it.

After sitting for a bit, then getting some nutrition, I felt better.  I had planned to ride the 35 miles back to Topeka, on gravel, of course, but that seemed like a pipe dream initially.

While we were racing, I told Brian that there were going to be some guys out there forever.  We were going pretty good, which means there were some guys probably going half our speed.  The time cut at the 50 mile point was 5 hours.  I think most of the riders made that because of the wind direction.  But riding back against that crazy headwind for 50 miles would have been a real challenge for nearly everyone.

We had to wait quite a while to complete the podium.  Dan Hughes, previous multi-time winner of the Dirty Kanza had caught a group and there was a sprint.  Dan was 3rd, with Mark Smelser, former collegiate criterium National Champions, a close 4th.

So, we did the podium, I ate a piece of pizza and had a beer, and decided to ride home.  I was feeling better and lots of time, spinning after a hard race is the best thing you can do.  2 plus hours was probably a little long.  Trudi drove Bromont home and got on her bike and rode out to meet me.  I had to stop and get a burrito less than 4 miles from home.  I was bonking.

Overall the day was good. Roger Williams put on an excellent event that has a National caliber course.

I ended up with a tad under 140 miles.  I was fairly unscathed.  I sort of cramped a couple times last night, but that is nothing new.  The DK200 isn’t on any list as of now, but you never know what the future holds.

Here is a link to some more photos of the race Roger Harrison took. 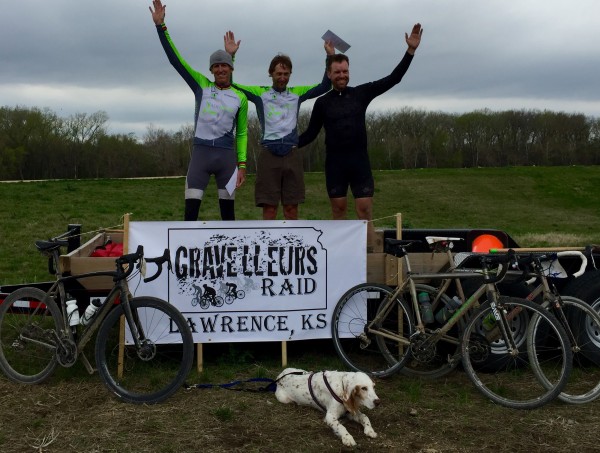 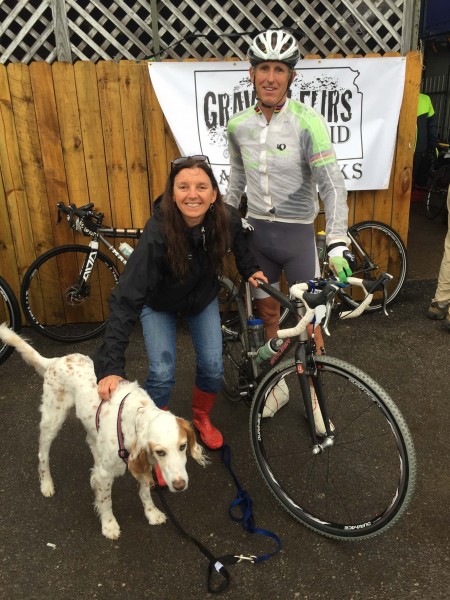 Bromont, Trudi and I before the start. 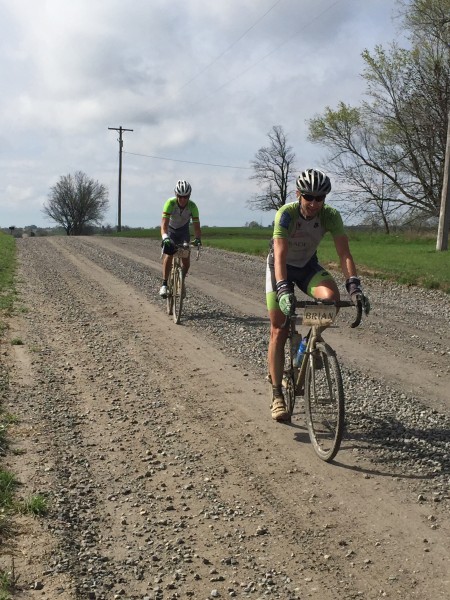 Early on. I was shedding botties and a jacket.  A smooth part of the course. 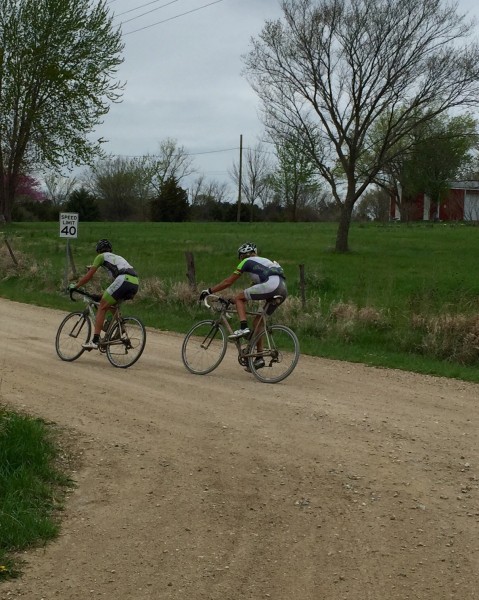 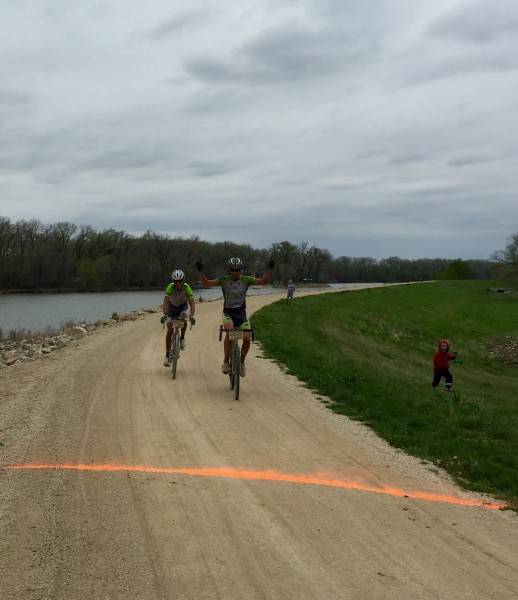 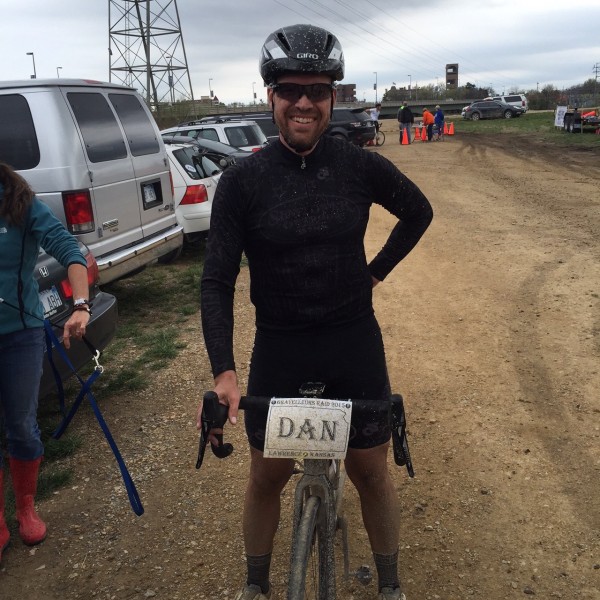 Dan Hughes was all smiles when he finished. 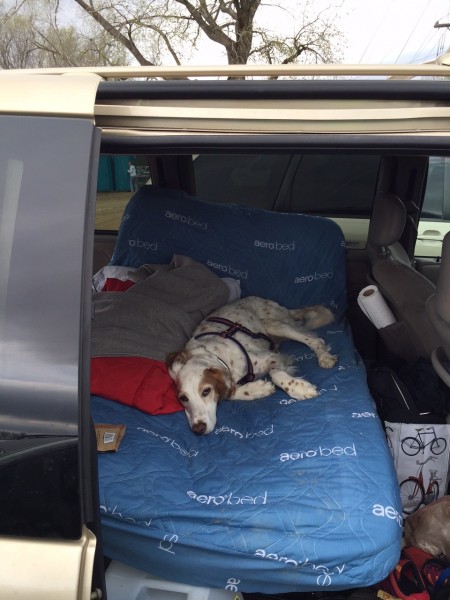 Bromont had a good spot all day.

13 thoughts on “1st Gravel Road Race Under the Belt”