I wrote this post a couple years ago and watching the Basque Country race this morning, I was noticing the different socks the teams were wearing.  The sock height is a tad shorter than it was in 2013, but it is still much higher than when I started racing.  Fashion trends in cycling usually have a functional purpose.  The number of different materials in jerseys is mind boogling.  But, the amount of material in socks is perplexing.  Having a bunch of skin covered on you legs, in the summer heat, makes no sense.  And having a bunch of material down by your ankles when it rains, makes for a bunch of water weight rotating 10000’s times during a race.  It does make a difference.  Anyway, here is my sock post from 2013 –

I was watching the Tour of California on the Internet yesterday and Paul Sherwin said something about Philip Gilbert dropping back and changing his socks during the race. I didn’t see it, but that seemed super strange to me. I’ve never even thought about doing something like that. Paul said something about maybe Philp was putting on some special “ice socks” or something. I’ve never heard of ice socks. Socks with pockets for ice. I couldn’t imagine wanting to cool my body enough to ride with wet feet. Then Paul said something like, “Maybe as the reining world champion, he just wants to look good?” Right Paul, that is it.

Anyway, I was looking through my sock draw yesterday, looking for some light socks to wear at 94 degrees (not with slots of ice) and found the original pair of DeFeet socks that I got from Jacque Boyer. I believe he gave them to me at Sea Otter, somewhere in the 90’s. I have worn this very pair of socks, 100’s of times and they still don’t have a hole in the toes. I don’t quite understand that. Either, DeFeet made the socks much higher quality, or…. well, I don’t have another explanation.

Cycling socks are so interesting to a racing cyclist. They are an easy way for a “real racer” to identify a novice. Over the years, it is strange how the style or trends have changed.

Back when I first went to Europe, back in the 80’s, all the Pros and Western Europeans worn wool socks from Italy. I only had a couple pairs. I mainly wore super thin nylon socks I got at K Mart, which cost about 1/10 the price. It was sort of a status symbol by then having a bunch of Italian wool socks, at least to a poor kid like me. I remember going up to LaCrosse, Wis., to stay with Mark Frise before the Tour de l’Abitibi, a prestigious junior stage race. We were getting dressed to ride the first day and Mark opened a draw that was just stuffed with Italian wool socks. It dumb struck me. I was so jealous. Mark went on to be the first American to win the race.

When all the Pros were wearing short wool socks, the Russians would be wearing these mid calf socks made in Russia, I guess. It looked so weird. All the Eastern Europeans wore the same mid calf socks. We could never understand why they couldn’t get with the program and dress stylish.

When I was riding for Levis, we hired Jiri Manus, newly to the US, via Czechoslovakia, to help coach our team. Jiri had a stellar resume. He was on the podium in the Olympics and World Championships. He won the British Milk Race and the Peace Race, the two best amateur races in the world. But, he hadn’t westernized enough for our team. Roy (Knickman), kept trying to help Jiri catch up with modern ways. Jiri would pour a bunch of oil into a pan and fry bacon in the morning. Then he would crack a few eggs into the pool of grease and dump it all over toast. We, as cyclists, were avoiding most fat completely. Plus, Jiri would only wear, mid calf, white socks. That was the deal breaker. Jiri was let go. He went on to be the National Coaching Director for USAC for the next 20 years, so it was probably for the best.

When I started racing MTB, every good rider wore road cycling socks. All good riders except Dave Wiens. Dave would wear hightop black socks. Man, did it seem so out of place at the time. He took a lot of flak over the years, but he was the “inventor” of mid calf black socks for MTB racing.

Socks were short, now mid calf. It is sort of like watching the shorts that basketball players wear. Watching Magic Johnson and Co. back in the day, it seems that they are wearing hot pants compared to the knee length shorts the current generation likes.

DeFeet was the company that changed the cycling sock industry. Socks with logos. Man, was that a game changer. Socks that matched the kits. It was nearly as big a change for cycling as t-shirts with words on them were, in the 70’s, for the general public. We never looked back after that. Soon, there were a lot of copy cat companies of DeFeet, but they were the original custom sock people. Shane Cooper is the founder of DeFeet. He is a eclectic guy. His business card says something like chief sockologist on it. Pretty great title. Greg Demgen, a team mate of mine forever, worked with Shane at DeFeet for a long while. I’m sure that there were plenty of young riders jealous of my collection of socks at that time. 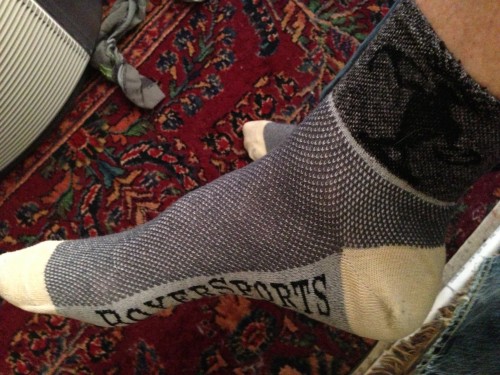 My original pair of DeFeet socks from Boyer. 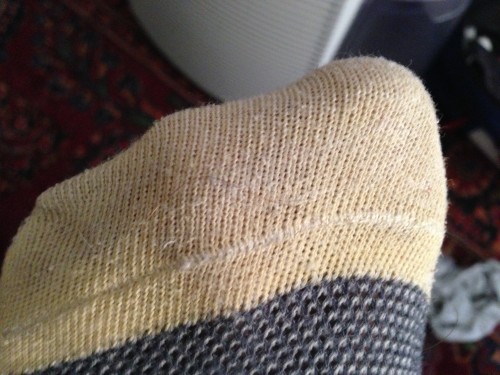 Toes of kevlar or something. 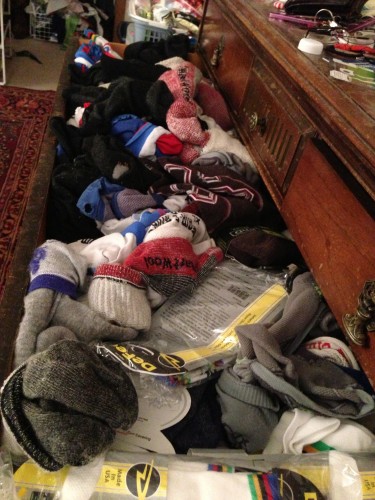 This is my sock drawer. I’d bet there are way over 100 pair in there. It’s nearly impossible to close. 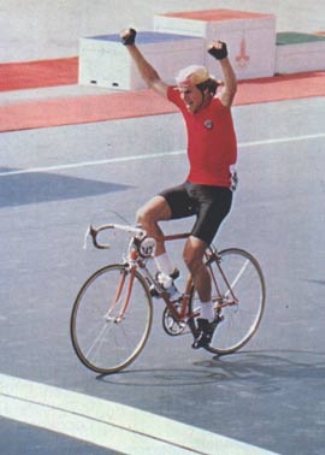 Soukho winning the Olympic Games in 1980,with his high socks of the time. 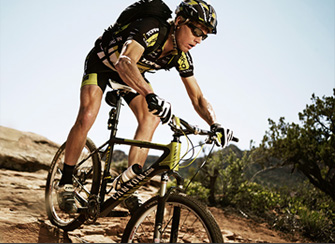 Dave is still at it, with his trend setting, black socks.