I hate being a total copycat, but I can’t think of a better title of this post than the exact same title that an article at Velonews  today.

According the article, Vincenzo sent his own personal letter to the UCI to voice his opinion, and support, of his team.

In the letter, he says, “The team must continue to participate in all competitions. It is in the best interests of cycling, of sport and of justice.”

Of sport and of justice?  Well then, by all means, let’s welcome them with open arms and forget the past.  Bygones should be bygones.

Maybe Vincenzo should have sent them his earlier opinion.  In December, 2014, he said, “The problems in this team are also in many others. I don’t think our team is the worst because in other teams there are worse people than there are here, I won’t name names.”

I guess things changed in the last 3 months.  Problems of last December have cleared, and now, “Astana is a symbol of clean and honest sport”.

Maybe Vincenzo should have testified to CIRC and named names.  Seems he thinks he knows names.  At least he implied that in December.

Nibali also wrote about the Padua investigation dossier that states that Astana was working with Dr. Ferrari for two years.  Not the whole team, just the team director, Alexandre Vinokourov, plus 17 of their riders.

About this, he says, “The dossier can’t be used.  The documents still have not been presented in the court, and so can’t be considered credible.”

I’m sure that the prosecutors that did this investigation probably just made up the 550 pages they gathered and that they really did no work and are just picking on Astana because they are Kazakh team, messin‘ around in their sport, bicycle racing.  Bicycle racing is an Italian sport, not an Eastern European sport.  They stole our rising star, so we’ll get back at them and make up a bunch of shit so they can’t race.  Makes total sense to me.  Completely not credible.

Vincenzo is sitting in Tenerife now, a very credible place to train, according to CIRC and Chris Froome.  It is the same place that Alexandre Vinokourov and Maxim Iglinskiy used to train for their respective wins at Liège–Bastogne–Liège.  Too bad Maxim and his brother both tested positive for EPO last season, while racing for Astana.

I don’t really appreciate, Vincenzo Nibali, supposedly a model rider and spokesman for “clean sport“, to spew silliness for his own benefit.  If Vincenzo is truly interested in competing  in a clean and fair sport, he needs to acknowledge and confirm what he knows to be truth and then behave accordingly.  If he decided to race for a team, such as Astana, then he needs to understand the potential pitfalls that decision had.

And one, which seems imminent, is that his team won’t be racing as a PRO Tour team.  Only seems right. 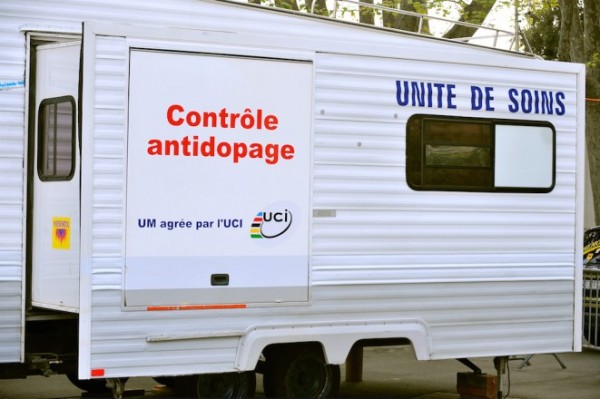 This is probably the UCI dope control that is sitting at the summit of the 3,718 meter volcano on Tennerife. I’m sure Vincenzo is being tested on a daily basis, even though it has been shown to be a “drug testing free” area.