Finally, I say.  Spring officially starts at 4:45 pm CDT today.  That is good news for cycling in general.  Daylight saving time is the biggest boost for bike racing, but spring is a mental line where we feel optimistic that the weather is on the upswing and better days are ahead.

I noticed last weekend, which was warm in Topeka, that even in the bad neighborhoods, people seemed to be out and cleaning.  Spring cleaning I guess.  Some people were even doing yard work, which might be the only yard work done in those areas all year.  I guess we are pre-programmed to do chores when the weather gets nice?

I‘ve been trying to fix a garage door opener the last couple days.  I hate it that we live in a throw away society.  I’m not sure if the Internet has made that worse or made it better.  I think it is easier to just order something new now, but it is also easier to locate hard to find parts.

But, so far, I’ve not had any luck with locating the part I need.  I need a small brass bushing that the motor shaft rotates on.  The company, Chamberlain, doesn’t even have a data base that shows the replacement parts of any of their products pre-1993.  This opener is from the early 60’s I think.  1993 was the year that they started putting those stupid safety sensors on the door rails, by the floor, making it so the door won’t move if the beam is broken.  Usually when I put up a garage door opener, I just wire those things up on the ceiling about an inch apart, so they never get knocked and don’t affect the operation of the door.

So, I went and bought a new opener.  I’m pretty sure the opener will work with the same chain and rail thing, but I’m not sure about that yet.

KU is playing their first game in the NCAA tournament  in 30 minutes, so I have to finish up.  It’s raining out, so I don’t feel so lazy watching TV during the day as I normally would.  Funny how that is. 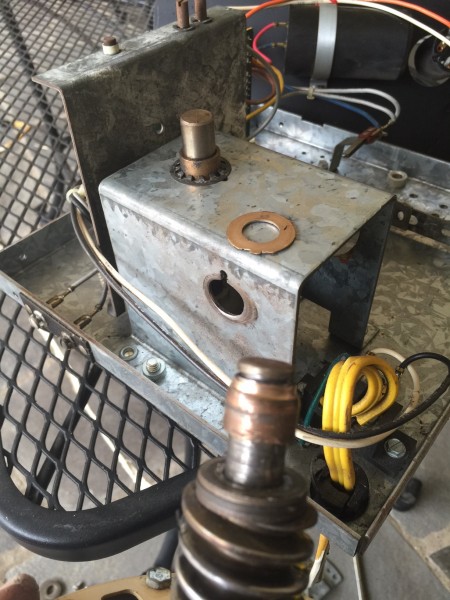 This is the bushing that is worn out. It has a lip on it and it allows the shaft to spin in the metal housing. 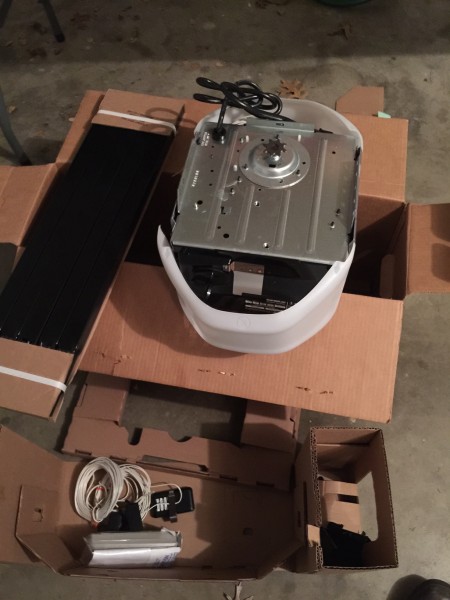 New head unit. I hate throwing good stuff away because it is still repairable, but without the correct replacement part, it is valueless.