Today is just that day, the 17th of March.  I couldn’t believe it, but I didn’t know whether it was the 10th or the 17th today when I looked at the calendar.  Shows you were my mind is.

Anyway, we’re driving Bromont back over to K-State to have another chest x-ray and maybe scope his throat.  He still coughs a ton and is not really eating much at all.  If he not going to be of this world very long, I want him to be as comfortable as possible.  I didn’t plan on taking him back and forth to the vet on a weekly basis, but it seems right as of now.

I’m going to be interested in seeing how much of the Flint Hills they have actually burned since I did the drive a couple weeks ago.  The air has seemed pretty smokey, but not smokey enough to make me think they are mostly done.  Everything they burn around Topeka and Lawrence seems to be ditches and fence lines, plus rural folks just burning their yards.  I’m pretty sure that isn’t what burning is all about, but people get burn happy this time of the year.

I’ve been doing the evening rides from our house at 5:30 when I’m  not sick.  Everyone seems to be going pretty good, plus I’m behind, so it makes the riding hard.  Yesterday we did 50 miles with a 21 mph average, with the wind blowing pretty constantly over 20mph.  I’m not sleeping enough to be recovering properly, but it is what it is.

Yesterday I dug up the compost pile and put it in the garden.  I haven’t been taking good enough care of the compost pile, so I pretty much started over from scratch, layering it again and watering it.

Since I’m feeling so shitty riding, I figure I should try to do some other things to get my body back to snuff.  The problem is that when I’m riding badly and have no energy, I am pretty pitiful doing any manual labors.  I only did it for a couple hours, but was pretty beat before the ride.  I didn’t actually feel all that bad riding, after the first hour.  I don’t know what my body does to get to that point, but I like it.  It must somehow have an ability to readjust itself and get performing as efficiently as possible.

I’m allergic to Kansas this time of the year.  I’m not sure if it is the constant shitty air or just spring allergies, but I wake up each day like I didn’t really sleep.  I haven’t been sleeping all that much, but you know what I mean.  Feeling rundown down isn’t motivating, but I’ve experienced it before, so I’ll just plod on.

I’ve been riding out to the races on the weekends, not racing, but riding there and back.  Both Saturday’s and Sunday’s races are about a 25 mile ride each way from my house, so I end up with just about 50 miles each day.  Adding the 50 miles for the evening rides, I am getting in enough miles to sustain, but not enough to be good.   I’m feeling behind already, not having really done any racing on the road.

Did you see the finish results of the MTB race in Bonelli Park, LA, last weekend.  Guess the MTB weather protocol kicked in and they had to cut a lap off the men’s race.  Racing over 1:30 hours on a MTB would have been too far.  Man, do things change.

Anyway, there were 27 men listed on the results and 38 women.  Todd Wells was the best US finisher, 12th.  Only two US guys in the top 15, out of 27.  I don’t have any idea what that is, but it shows how pitiful that sport is doing on the UCI level.  I’d like to see how many riders started.  You’d think they would put everyone’s name down that competed, like real results, but that might not of been the case.  Whatever the case, US MTB racing, on an international level, has a lot of catching up to do.

Okay, I need to get going.  We have an early appointment for Bromont at K-State. 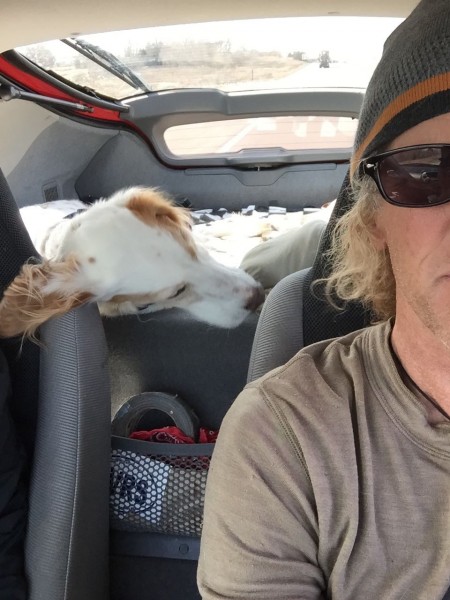 Bromont usually sleeps all the way over to Manhattan. 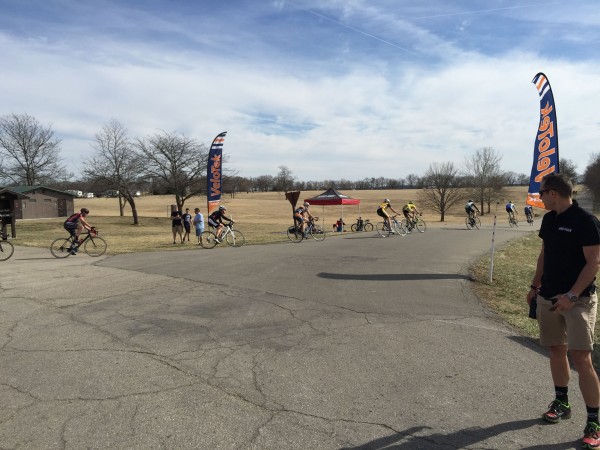 The Saturday criteriums have been getting a pretty good turnout. They are points races, which is pretty hard for this time of the year. 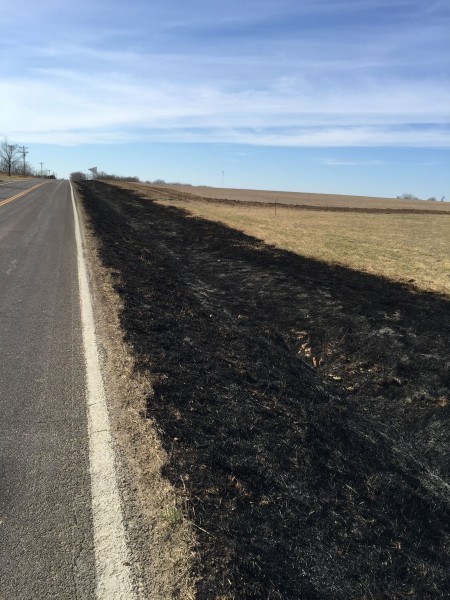 The only seem to burn ditches around where I live. 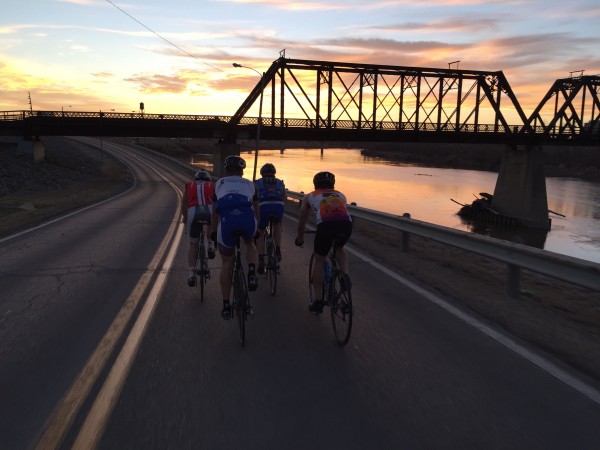 Coming back in last night at sunset from the evening ride. It was all split up at the end. 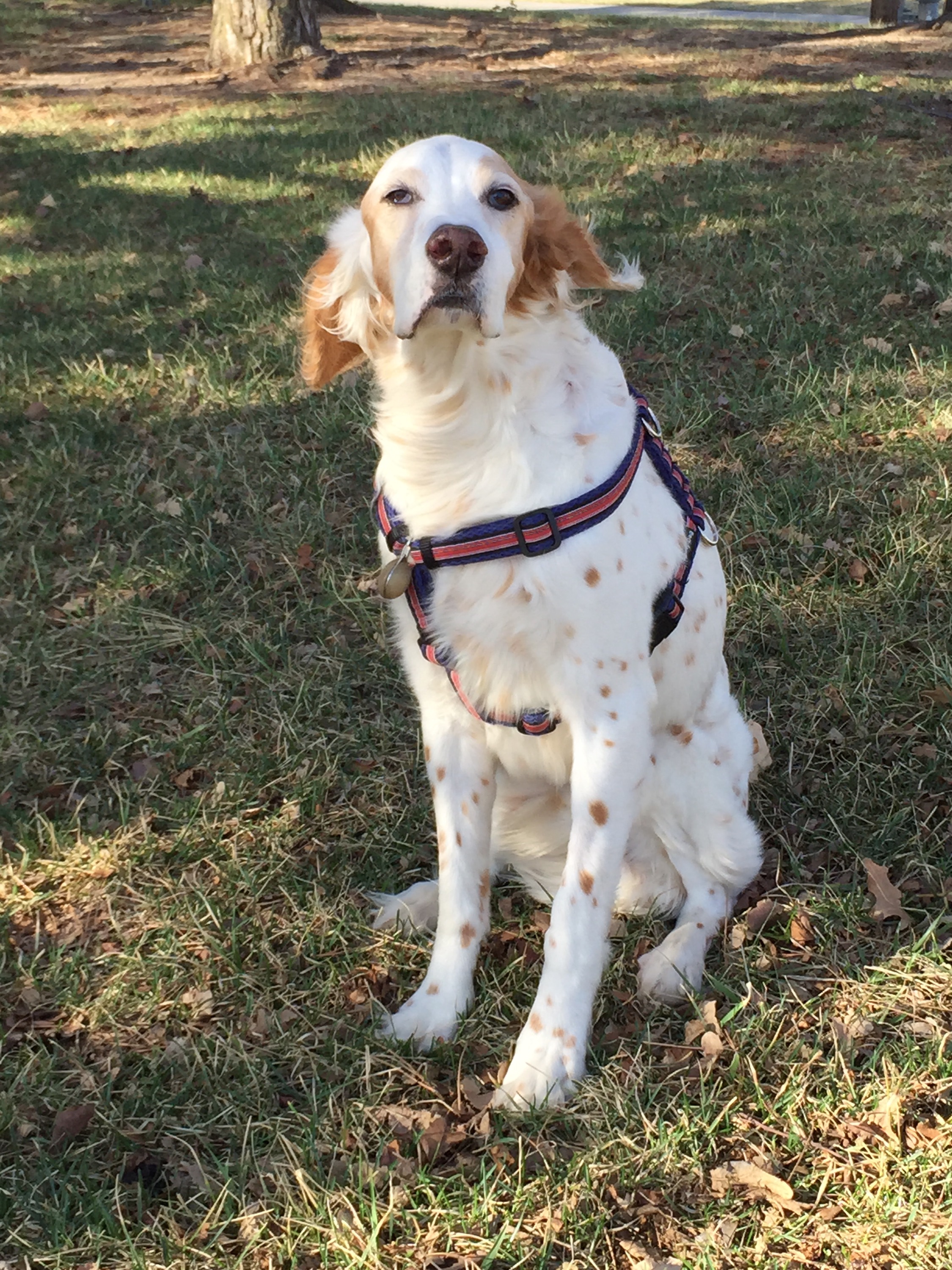 At K-State this morning. He’s nervous.