I saw this Op-Ed a few days ago from a senior water scientist at the NASA jet Propulsion Lab who says that there is about one year of water left in the water storage system in California right now.

I knew that it has been a slim year for snow there, but didn’t realize January was the least amount of precipitation that has been recorded in California since they started keeping record in 1895.

This is bad.  I know this is also the situation in many areas of Texas.  Last time I rode by Lake Travis, near Austin, the docks were hanging vertical like ladders, not even close to touching any water.

We’ve been pulling water out of the Ogallala Aquifer, here in the midwest, way too fast too.  32% of the depletion of the aquifer during the 20th century happened in 7 recent years.  We’re draining it at record pace, using the water for agriculture, of course, but also for oil and coal extraction.

We’re not in such a dire state as they are in California, but we have our heads as buried in the sand as they do.

It think it is a given that the average citizen, especially in California, is very concerned about having a ample supply of clean water.  We are willing to do just about anything to assure that.

In California, they haven’t even established mandatory water rationing in most of the state. With less than a years worth of stored water available and they aren’t doing this?  It is completely crazy.

This isn’t a political issue.  It is an issue for everyone.  We need to figure out, throughout the United States, how to use our water wisely.  Maybe we should be building a ton more water pipelines instead of fighting about oil pipelines like Keystone.  I don’t know the answer.

I do know that our country can be very resilient  and cooperative when we feel it’s in everyone’s best interest.  We seem to be at odds over a lot of things right now.  This is a pretty simple situation.  We are running out of water where a lot of Americans call home.  There is very little water left, we need to use it more wisely.  And we need to address the problem very soon.

Jay Famiglietti, the author of the LA Times Op-Ed said it in a basic way – We’re not just up a creek without a paddle in California, we’re losing the creek too. 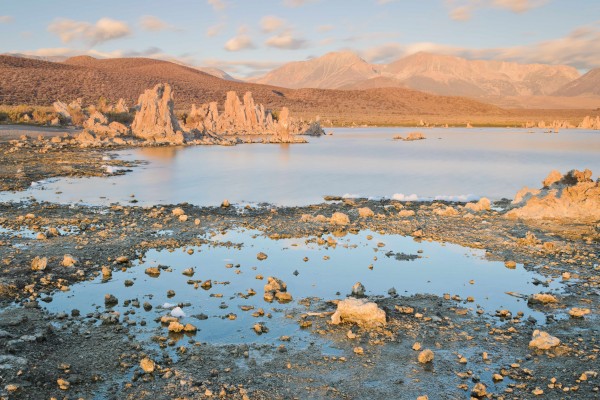 Mono Lake, outside Mammoth Lakes, CA. This is a picture from 2013. I gone by this lake, everytime I’ve been to Mammoth, for years and years. This is so sad.