I’ve been laying around a bunch the last couple days, with my eyes shut, but not able to sleep. Being sick sucks in many ways, but it also makes you remember how you “used” to be open to new things and absorb nearly everything.

I’ve been listening a lot.  Not to podcasts on my iPhone, but to the sounds around me.  Laying in a lawn chair in the backyard, I am amazed how many sounds I hear.  I used to know all of these sounds, but they seemed foreign to me for some reason.  I think that is because I don’t listen so well anymore.  I don’t listen to my surroundings like I did when I was a kid.

What surprises me the most, during the day, is that most of the sounds I can hear aren’t those of people, but those of nature.  Off course there are the trash trucks driving by, and then occasional chainsaw, but really the sounds of the wind and nature drown out everything that humans produce.

The sounds I like the most and awes me the most are those of birds.  Spring is pretty much here in Kansas.  It’s been over 70 degrees for over a week and everyone and everything seems to be happy for the winter to be over.

Early in the morning, but really all day, birds are just at it, chirping away.  I was laying in my backyard yesterday and tried to count how many different birds I could hear.  It is really hard differentiating the separate birds when you’re so rusty at it.  Then trying to remember if you’ve already counted that sound before or if it’s a new bird.  I got up to over 10, then realized I’d lost count, so decided to just enjoy the music and forget the math.

Geese are migrating nowadays.  I have a special relationship with geese.  At least I appreciate them and their companionship.  When I was roofing my building a few years ago, nearly all night, they would be flying over constantly.  They were busy going south, as I was busy trying to finish up before the winter caught up with me.   They are migrating back north now, which means warmer weather.  I seem to think they sound just a tad different heading north than when they are going south, but that is probably just me imagining.

At night what I like the most is hearing the trains.  I can hear the trains on the tracks and their whistles.  We don’t leave anywhere close to any train tracks, the closest set, that are used regularly, are at least 4 miles away, but it is so quiet at night, they sound so near.  I like traveling by train.  That is another thing I don’t do so much anymore, that I should.  I imagine where the train is going, what it is hauling,  A good friend of mine from Iowa, Harold, told me once, that he thought it was a good way to judge the economy of a country by the frequency of trains.  I’d never though much about that, but I think he was right.

What I don’t like at night is the sirens.  It seems like there are way too many sirens.  Much too frequent. I’m up, feeling sorry for myself because I’m sick and then all of a sudden a siren.  Then another.  I think, “Man, I’m in a lot better situation than whoever those are heading for. ”  I always wonder if they are ambulance sirens or police.  Either way, it’s not good.

I like watching Bromont listen while I listen.  I know that he knows a thousand times more than I do about our surroundings.  He listens really well, but has smell, which for him, is way better than hearing.   Dogs have us beat in a lot of ways.  I’m never going to be as in touch with my local enviornment as Bromont, but I’m going to try to be more cognizant of my surrounding, using all my senses. 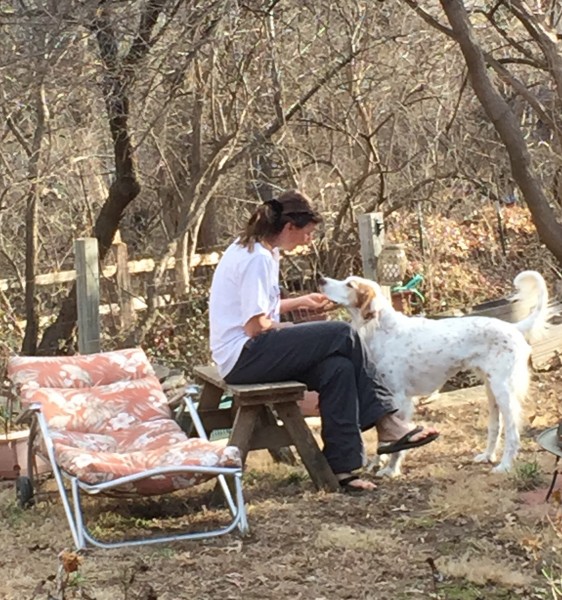 Trudi and Bromont in the backyard having a little moment. 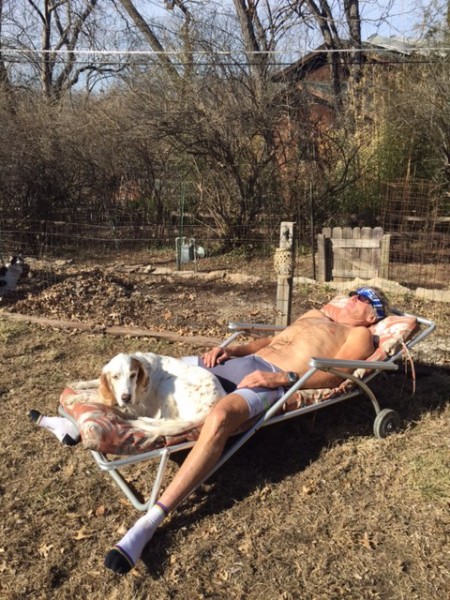 After riding on Wednesday.