Maybe the title to this post is a little misleading.  I wasn’t necessarily cherry picking primes exclusively from Bernard Hinault, I was winning a bunch of primes in a row because of Bernard Hinault.

I guess I should backtrack a bit.  Back in 1986, I was riding for Levis/Isuzu.  The structure of professional racing was a lot different back then.  Back then, the United States was thought of as a developing country and we needed “assistance”, through special rules, to catch up with Europe and get up to speed.  Even though Greg LeMond won the Tour that year, with Andy Hampsten, 4th.

So, Andy was riding the Tour for La Vie Claire in July and then in August, was racing for “our” team, Levis.

I’d travelled to Colombia to do the RCN with Hinault and La Vie Claire in May.  That wouldn’t have been my first choice of a race to do.  We got massacred, like totally massacred, other than Hinault did win the final 40 km time trial in Bogotá . You can see by our faces in the photo below, we weren’t happy campers.  And we were dropped there.

Anyway, jump ahead a couple months and we are at the Coor’s Classic in August.  Bernard, Greg and Andy had just finished the Tour a couple weeks earlier.  That was the Tour the 30/30,  Slaying the Badger was based upon.  Anyway, there was a lot of infighting within the La Vie Claire team, them trying to figure out who was going to win, Bernard or Greg.

Andy was a little shell-shocked, and beat, after the whole ordeal and was happy to be back racing with us.  The Coor’s race was the biggest race in the United States, maybe ever.  It started in California and made its way through Northern California, Nevada, then we transferred to Grand Junction Colorado and did another week in Colorado.  It was a super event.

It was the main focus for all US based teams, the biggest race of the season, by miles.  Our team usually stayed at high altitude, Mammoth Lakes, CA, Breckenridege, CO or somewhere like that to prepare for the event.

The race was a mixture of European type road racing, point to point, along with hard circuit races, plus criteriums.  The criteriums are what differentiated the race from European stage races.  Most the European pros had not really done too many criteriums before.  We, as domestic riders, had done 100’s.

Bernard did not like criteriums.  The officials and Bernard talked long and hard before almost each and every one.  He got unlucky because it did rain a couple times during the race, during criterium days, which made it much worse.

Anyway, we were doing a criterium in Reno, Nevada.  We’d already done a long road race in the morning, Tahoe to Reno, and we were doing the Reno Criterium, at dusk, through the streets of downtown.   It was super cool.  Well, I thought it was super cool, but Bernard wasn’t so thrilled.

Since we’d raced 4 hours already that day, everyone was ready to start out pretty casually.  I’d heard from very reliable sources, that there was going to be an enormous amount of cash money given out in primes during the race.  And it was going to start early, like instantly.

I was on Hinault and he was going super hard, like time trial hard.  I looked back and the field was single file, with gaps opening everywhere.  I was very content right on Bernard’s wheel.

Hinault never missed a beat and just kept pulling.  The final corner was maybe 250 meters from the line.  I looked back and there wasn’t anyone that could sprint anywhere near.  It was so easy to win the money, I hardly had to sprint.  I won the prime and just went back and resumed my position on Bernard’s wheel.  And he kept going.

This went on lap after lap.  They rang the bell nearly every lap and I won the prime and then dropped back and sat on for another lap.

Bernard didn’t seem to even notice.  He was more concerned about staying upright than winning money.

We, by that I mean, our team, and most US riders, were first concerned with results, but a close 2nd was winning money.  Prize money was good and a big proportion of our yearly income.  It wasn’t unusual to win 20-30 thousand dollars a year in prize money, depending on the schedule.

I couldn’t really tell you how much money I won the first 10 laps of the race.  It was in the 1000’s.  Roy Knickman, my teammate, eventually made his way up to the front too and he won a couple primes also.

Hinault went on and won the Coor’s Classic overall.  LeMond finished 2nd, so they flip-flopped their Tour results.  Phil Anderson, who was guest riding on our team, finished 3rd overall and completed the podium.  We won the team competition, which was nice.

There was so much money to be won at the Coor’s race, you sort of had to be really shitty or really unlucky not to take home some.  They’d sometime give a lapped rider a prime for just riding the next lap. I got a prime in Vail once for being the first rider from Kansas to cross the line.  I was the only rider from Kansas in the race.   It was always interesting.

Anyway, Bernard never said a word to me.  I did feel a little weird after winning the first couple primes,  probably because Hinault was a 5 time Tour de France winner, but got over it pretty quickly.  I could tell he was riding scared, while I was in my environment. .  We had different agendas, so it was all good. 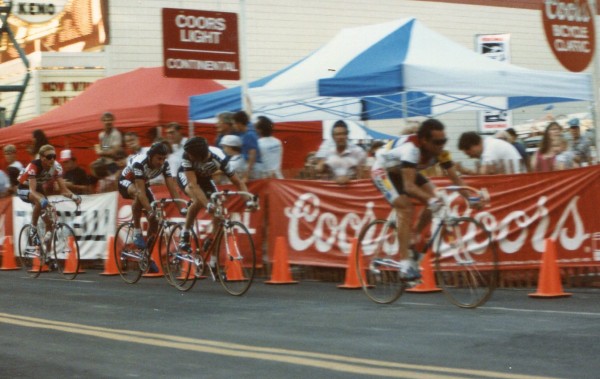 This is a picture of the Reno Criterium, probably 6-8 laps in. Hinault had pulled the whole time, close to 30 mph. I’m looking back, with Roy on my wheel. It was pretty fun. 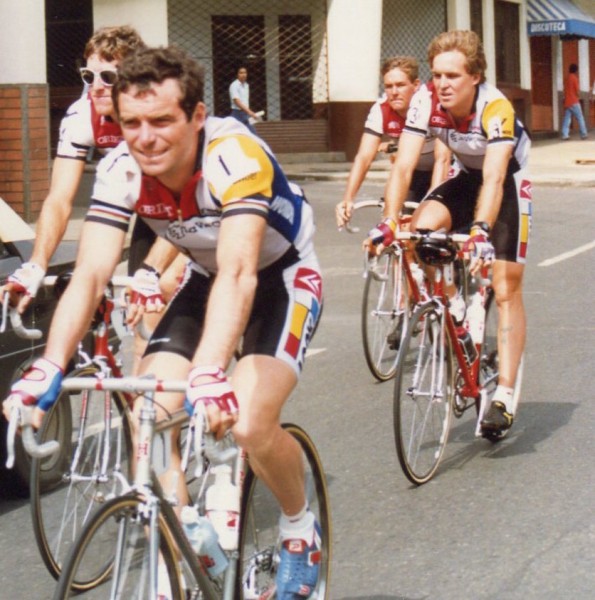 The remains of the La Vie Claire team riding to the start of a stage of the RCN. I’m behind Hinault. Thurlow Rogers is behind him and behind Thurlow is Greg Demgen. 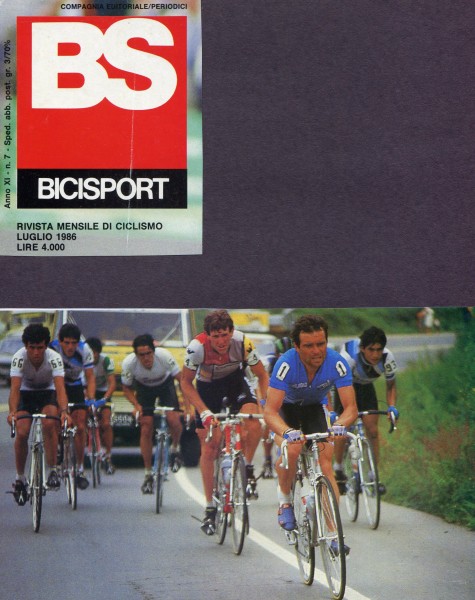 I’m not sure what jersey Bernard is wearing here. Obviously, we’re climbing and not riding with the field. I think this is the stage that climbed up to Bogota, the next to last day.