I saw an article that said that Chris Froome testified to the UCI doping investigation and said, to sum it up, that you didn’t have to choose to dope to excel at the sport now.   I don’t quite understand anything about this.

I don’t understand, if he doesn’t or doesn’t currently know anything about doping in the sport of cycling, why he would go and testify.  And two, if one is the case, why he should have any input or comments about it at all.  I was thinking that maybe I didn’t understand what the commission was all about.

From the UCI’s webpage-  Essentially, the CIRC’s mission is to investigate the problems that our sport has faced in recent years, notably the allegations – particularly damaging to our image – that the UCI was implicated in wrongdoing in the past. On this basis, the CIRC will make recommendations for change so that as far as possible those mistakes are not repeated.

I sort of didn’t.  I thought the commission was mainly set up for doping eradication ideals.  But, whatever the reason, I hope Chris Froome has no knowledge of anything information the commission is looking for.

Since he has never participated in doping and never observed doping, I don’t think he has the credentials to testify.  Just because Chris is one of the best stage racers in the world isn’t enough to qualify him.

That being said, I wonder if he paid much attention to the all the doping positives recently or the whole Astana situation.  17 guys on that team visiting Dr. Ferrari.  I wonder if he read the interview with Smartstops new rider, Juan Pablo Villegas.  Here is a great interview with him.  In it, the question is –

…..what percentage of the peloton would you say was doping at those races?
I can’t give you an exact number, but it would have to be very, very high.

And then he goes and names all the Colombian riders that he raced with that have “graduated” to the Pro Tour level by winnning races in Colombia.  He doesn’t name anyone specifically, but if he says that it is very common to dope in Columbia and the best Colombians are now racing, and winning Grand Tours, then you make the connection.

Even the current Tour de France champion, Vincenso Nibali said that Astana is no worse than anyone else in the regards to doping.  I wonder if Chris Froome pays any attention to what Vincenzo says?

Okay, let’s just say that Chris Froome is a genetic freak.  And he doesn’t have to dope to win the races he does.  Does that mean that his opinion that the peloton is relatively clean, or more accurately, riders don’t have to choose to dope to win races, means anything more than any other observer.

There are way too many things going on right now in the sport to say that the sport is clean.  Greg Van Avermaet ozone usage is just the tip of the iceberg.  Do you think if he was breaking the rules by using ozone to treat his blood that it would stop him from manipulating it in other ways.  When Bart Wellens just decided to quit cyclocross at the old age of 34, it shows that all the guys involved when Dr. Chris Mertens are going to have problems explaining themselves to the Belgian Federation.  I’m thinking most of these guys are going to have to “sit out” 2 years.

For Chris Froome to declare that the sport is fine and dandy, that all the drug cheats are being caught,  just rubs me the wrong way.  I don’t think that it does any good when someone of Chris Froomes stature, in the sport, says ignorate things like this.   He needs to check out the history of the guys he’s currently racing with.  And pay more attention to how many guys are turning up positive.  Guys that don’t even win consistently.

We still have a big problem.  In theory, CIRC is releasing their report today.  Or at least that is what was reported.  I guess they are going to redact the names of some riders in the report, or people in the report, for legal reasons.  I’m not sure why they do that, but they do.

We’ll see how ugly of a state the sport is according to the UCI.  I’d be very surprised if it is as hunky dory are Chris implies it is. 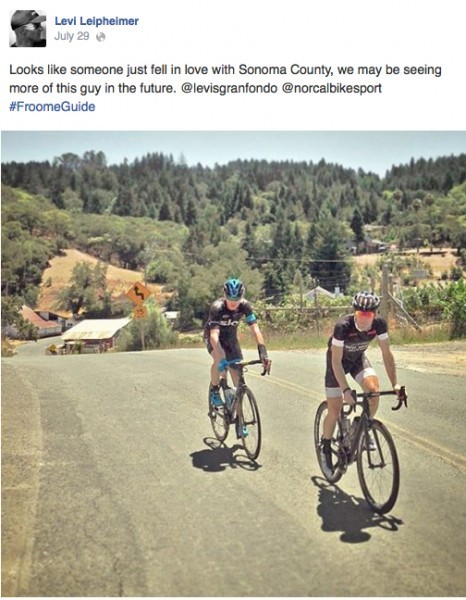 Maybe he can come over here more often to train with Levi.  At least Levi thinks he might.

28 thoughts on “Chris Froome Testifies to CIRC about What ???”