I started coming down with a chest cold or something last weekend.  I woke up Saturday, feeling sort of crummy and it only got worse from there.  I don’t get sick that often nowadays.  I know some of you think that isn’t correct, but compared to when I was younger, I’m sick just a fraction of when I was younger.

A big reason for the continual illness is that I had my spleen removed when I was 6 years old.  I fell out of a tree and it ruptured, so they had to do an emergency splenectomy   The spleen holds a ton of thick red blood cells, super high hematocrite,  plus it filters the blood to your lungs.  So, I’ve historically had a bunch of lung infections throughout my lifetime.  I’ve had to take preventive pneumonia vaccines all my life.

I though that maybe I could keep the dripping out of my lungs, just up in my head.  But, no, it got into my throat and then lungs.  After reading all the bad news about antibiotics, plus, my own personal experience, I think I’ll just try to ride this one out, even though I’m coughing brown stuff out of my lungs.

I’ve been pretty stressed out the last few days and maybe that is one of the reasons that I feel so rotten.  I try to avoid stress, but sometimes it just finds you.

It’s funny how sometime being sick is such a drag and other times I doesn’t seem to matter much. I’d say I’m kind of in the middle here.  Early season illness is always a big setback.  You just get to where the pedals are turning over pretty well and the weight is coming off, then you get sick and it’s back to square one.  Well, maybe not square one, but square two or three.

I try to ride through sickness, but when the air temperature is in the 30’s, it’s a little tough.  I did an hour and a half with Bill yesterday.  It didn’t feel too bad, but I was wiped last night and this morning.  Maybe it was  a half hour too far.

Okay, enough of the moping .  The weather is supposed to get nice here towards the end of the week and hopefully I’ll be less anxious by then. 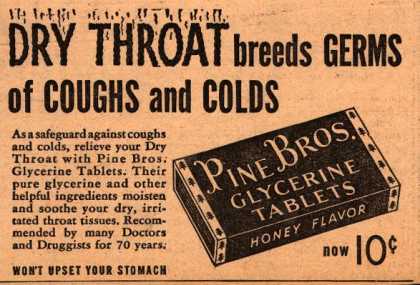 I couldn’t find any of these at the Walgreens.

12 thoughts on “Chest Cold or Something”