Yesterday it was snowing and I decided to go ride anyway.  I rode over to Golden with Trudi, to get a coffee at Starbucks.  Initially, I just wanted to get out of the house, but then, after a little coffee, I was motivated to ride some.  So, I decided to ride up Lookout Mtn.

I am not race fit, by any means, but I’m not just horrible either.  I started the climb and realized it was going to be pretty windy on certain sections, plus, anywhere there was blowing snow, it was pretty slick.  I was just cruising along, so it was fine.

But then I started trying a little harder.  I’d say I probably rode up the climb at about 75% as hard as I could have.  Some places harder, some easier.  I rode up it in about 22 minutes.  I looked on Strava and Howard Grotts has the Strava KOM on Lookout at 16:31.  That time surprised me.  I could probably ride up the climb 3 or 4 minutes faster when I‘m in race shape and acclimated, but not 5 + minutes faster.

And Lookout is a climb that the Pro Challenge has included the last few years.  The “Pros” usually seem to climb it in the mid 18’s, so Howard was haulin‘.

I have a hard time giving Strava KOM’s much credence.  Nearly  all are  set wind aided or during a race.   Especially in big cycling locals.  But, that doesn’t mean I don’t look at them still.

I have been climbing better, than historically, but recently, sans broken hip, because I have been light.  Weight has a ton to do whether you go up hill fast on a bike.  If I’m 8 lbs light, it is a couple cogs in the back on a road bike or a chainring in the front on a MTB bike.

Descending back down Lookout yesterday, it was sketchy.  Lots of sand in the corners, or even worse, ice and snow.  You have to be very cognizant of how much front brake you are using in those situations.  There is no upside to be pulling your front brake in any slick condition, if your front wheel is pointed any direction other than straight forward.

And weighting your outside foot.  It is so easy, especially after doing a long MTB race, to not put all your weight on your outside pedal, with no weight on your seat.  Lots of times corning on a MTB bike, you have your pedals at 3 and 9 o’clock to allow your legs to absorb the shock of the trail.  That is usually more important than getting your weight down below your axles.

Anyway, I feel I have to go through this check list now, since I’m a little spooked cornering.  I’ve only done two races since the end of May 2014.  Both MTB.  I’m eager to get back to some road racing.

Changing the subject, sort of, how about the Pros in Oman yesterday, protesting and ultimately just quitting the race, because, I guess, they said their equipment wasn’t good enough to race in extreme heat?

It was a combination of more than that, originally there were high winds, thus a ton of blowing sand, so the officials shortened the race.  But later on, all the riders stopped and said it was too hot and that their tires were coming unglued, tires exploding and brakes not functioning.

I have a very hard time believing that their tires were actually exploding because of the heat.  Either ambiant heat or rim braking heat . If that was the case, they were riding too much pressure or something.

But the tires rolling off the rim because of the glue melting, I have experienced that.  There are certain glues that works much better than others in that regard.  You would think that the mechanics of these professional teams would know that the temperatures were going to be extreme and that they needed to adjust appropriately.  I don’t think that 20 degrees of air temperatures can really affect the tire glue that much.  It is much more the heat built up by the pads on the rims.

Or how about just riding their training wheels, clinchers, I assume.  You don’t have any tire rolling off the rim problems, associated with heat, when you are riding clinchers.

I have a hard time understanding why the riders feel like they should not race because they are riding equipment that doesn’t work in the conditions they knew they would encounter.

Tom Boonen said, “We are all fathers and sons, we are not here to fight a war.  No one wants to put their lives at stake.”

The great Eddy Merckx, the race co-owner, wasn’t happy.  He stated that many other races have dangers and that they still compete.

“We’ve ridden though some gnarly stuff in the past. Whether or not yesterday. … Well, I won’t go there. I’m trying to be politically correct.”

I’d say I agree with Eddy too.  Every single race I do, and these guys do, we put our lives at stake.  Cycling is an inherently dangerous sport.  I’d much rather be dealing with rim heat than wet on cobbles, any day of the week.

These guys are paid so much that they aren’t willing to take risks.  They only take risks when they deem it appropriate.  There are many riders that aren’t willing to do what Tom Boonen does at the end of a race to position himself for the sprint.  He is willing to do this because it is his livelihood.   The lead outs at the end of races, the positioning is very physical and violent, thus nearly the “fight a war” phrase Tom referred to.  It is just that he is picking his wars.

All these guys knew they were flying to the Middle East to race in February.  Do you think that a Tour de France stage would be cancelled because of heat and equipment issues?  I don’t think so.

Eddy says the riders have put the race in jeopardy.  No one forced them to come and race, it was voluntary.  It seems like there should have been a better solution.

Talking about climbing and Strava KOM’s.  How about Ned going and setting KOM’s on Couser and the surrounding area yesterday out training.  There are some pretty good riders on the leaderboards.  Plus he averaged nearly 20 mph door to door with 3300 ft. of climbing.  He must be going good. 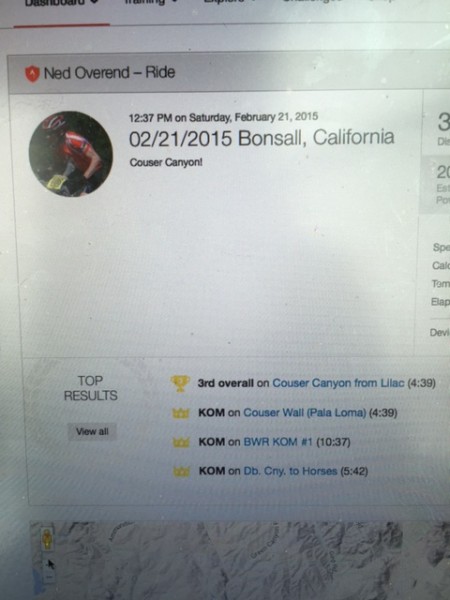 6 thoughts on “Climbing and Descending / Protesting at the Race”