The 24 Hours of Pueblo MTB Race was something I hadn’t ever really considered as a bucket list event, but now that I’ve done it, I realize maybe I’m not sure what needs to be on my bucket list.   It was fantastic.

I love that I’m involved in a sport that has so many facets.   And I’m glad I’ve learned the abilities to participate in many of them.  Having different skill sets, in the sport of cycling, has given me the longevity in the sport.  It never gets boring as there is always something new to experience or hone/relearn.

I haven’t really raced MTB bikes in a long time.  I did the Berryman Trail Epic a year and a half ago, plus I’ve done Chequamegon many years in a row, but riding 3 MTB races in 2 years doesn’t keep you up to speed in the skills needed to ride efficiently and safely.

I hadn’t realized how much I miss racing MTB bikes until I was actually at a race.  But, the problem was I wasn’t up to speed, I hadn’t paid my dues.  I was a little out of my element the couple days before the race.  I did a couple laps on the course and realized that it was going to be a learning process.  Plus, I had the worry, in the back of my mind, that I didn’t have the endurance, or my body was too fragile, to be able to compete for a 24 hour period.

I decided last minute to do the race.  My friend Vincent’s team had signed up and one of their guys had to cancel, so he asked me if I wanted to do it.  I was apprehensive, but thought, “Why not?”  I’m always up for new adventures.

Our team, which consisted of me, Vincent, Bob Campbell and Keith Collins,  had no preconceived thoughts on how we were going to do.  I didn’t know the other guys, other than Vincent, plus I didn’t have any idea how we would hold up to the round the clock event. I think this gave me a little get-out-of-jail card on the personal stress, or race pressure, I usually self inflict which was nice.  I say that, but I really didn’t sleep much the night before the race and I was nervous as hell waiting for Vincent to finish the first lap to send me out on the course.

I tried to ride a pretty quick first lap, but was all over the place.  One thing about riding in the desert, it doesn’t pay going into corners too fast, it will cost you time, and sometimes skin.  The course was fun, about 16.5 miles around, with no real climbs, but lots of short hills.  But, the course was continuously lined with cactus.  That was usually the reason the trail took a turn.  As the race wore on, more and more cactus seemed to be laying in the trail, showing me that there were a lot of hurting people riding their bikes around in circles.

After a few laps, we were up to 4th place overall and 2nd or 3rd team in the open 4 men’s division.   Keith went off the trail once and got a tree branch imbedded into his bicep, which needed some medical attention, but by the time the night laps started we were looking pretty good.  Then Keith had bad luck once again, and fell trying to pass another rider.  He ripped off his rear derailleur and had to jerry-rig his bike into a single speed.   Then Bob got a slow leak and had to stop and mess with that a bit, so we lost a good 20 minutes, or more, total, and almost dropped out of the top 20 overall.

I realized we weren’t going to win the race, overall, or our division.  The winning team was all doing lap times as fast as I was and I was the fastest rider on our team.  But, we were in contention for the podium and everyone seemed focused on that, so I went along with it.

With just a few hours to go, we came into the transition exactly tied with the 3rd place team.  I knew I was going to have to ride more than my share if we were going to finish 3rd.  So I ended up doing 3 out of the last 6 laps, which made for a total of 7 laps of the race.  That is about 116 miles.

The cool thing, personally, about it, was that I was getting way smoother and more efficient as the race progress.  So I could ride easier and use less energy and not really have much slower lap times.  I never really got a chance to ride the majority of a lap without being held up by a lapped rider.  Even the 2nd lap of the race, I started lapping the tail end of the race on the last climb, and at that point, I was pretty horrible at passing other riders.  I got much better at it during the next day.

And I had a ton of passing practice.  I’d guess I passed somewhere close to 500 other riders during the 24 hours, probably more.  I never got passed, but I did get a pretty good whoopin’ by this young kid, Kyle Trudeau, who was riding on a Corporate Team, that means.  He started a night lap just a little ahead of me, but I caught up to him on the first single track when he got jammed up by a slow guy that didn’t want to yield the trail.  I sort of stayed with him through the next single track section and realized that he knew the trail way better than me.  When we hit the most strenuous section of the course, the Bitches, which was a series of around 7 hills,  Kyle was flying.  To my defense, it was my first lap in the dark and my lights were not set up even close to correct.  So, on the descents he was putting something around 10 bike lengths on me and then I’d grind my way back up to him at the top of the hills.

After this section, we hit another narrow single track and I stayed with him until he got past a few riders that held me up and that was it.  Later on during the lap, my headlamp got all jacked up and I had to ride no-handed for a bit trying to get it reconnected to my helmet, but never-the-less, he took over 3 minutes out of me that lap.  I think he only rode 4 laps in the race, but all his laps were sub one hour, which is super.  I looked up his results on USA Cycling and he has been racing a ton this fall and winter.  He could end up being a very good bike racer, he already is a fast one.

That lap got me a little depressed, even though it was pretty fun.  I didn’t sleep a wink the whole time.  I actually might of dozed off for about 5 minutes once, but I can’t really say if that is true or not.   There was too much stuff to do, trying to wipe off, eat, clean your chain and then get ready again to head out.  Plus, I was too hyped up to really just lay down for 45 minutes or so.

One near catastrophe was after a lap at 6 am, which was half dark and then an amazing sunrise, I was cleaning my bike and Vincent pointed out that my fork, a rigid Pace carbon/ti fork, was completely not connected on one side.  One stanchion tube had completely broken right at the crown.  It startled me and almost made me sick in my stomach when I started thinking about the would of, could of’s, of what the potential out come, really, should have been, out on the trail.  There were many places that I was going over 30 miles per hour, with rock dips and other obstacles that would have been disastrous to my face.

I had brought along a shock fork for the front, so I switched the fork out in-between laps.  It was actually nice riding some suspension the last couple laps.  I probably, in retrospect, should have used the front shock all race.

Anyway, we stayed pretty consistent the last few laps and ended the race in 9th overall, and 3rd in the open 4 men’s category.  There were 100 teams in our category, so that was actually really good.  Everyone seemed happy with the result.

I made a lot of new friends at the race.  A lot of people I didn’t really know, came up to me and talked.  It is funny how much in common I have with other bike racers that have been at it for a long time.  It is a big part of the sport for me.

This 24 hour race had the feeling of the old NORBA Nationals, back in the 90’s, when the sport was still growing.  A lot of enthusiasm, lots of camaraderie, and a very fun environment that  I sometimes feel at current level road races or UCI MTB races, is missing.  When Keith destroyed his drivetrain, the SRAM tech guys took his bike, put on a new rear derailleur and chain super quick.  Everyone was so helpful and supportive, it was a really nice vibe.

I’m sort of wandering all over here, it’s only 3 am, Tuesday morning.  I did sleep 11 hours on Sunday night, but riding yesterday, in Sedona, I was destroyed.  I am still in Sedona now, hoping to do some great riding here today, but when I can’t sleep because I’m over tired, then the next day doesn’t go too well.  We’ll see.

Yesterday, I met up with Tim and Sue Butler, from Portland.  They were out and I got Sue’s number to ride today.  I don’t know either of them very well and am looking forward to riding some with them.  Riding around Sedona, from my one day of limited experience, would be a whole lot better, and more fun, on a big movement, full suspension bike.  I was having a hard time following Vincent around yesterday, especially on the steep, technical climbs.  That was partially because of my bike and partially because of my energy level.

It is beautiful here, so I’m hoping to have more energy, in a few hours, and get to enjoy the vistas from my bike seat. 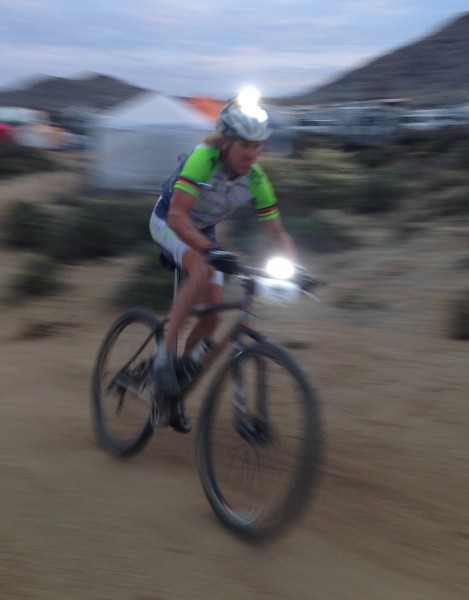 Coming in at dawn. 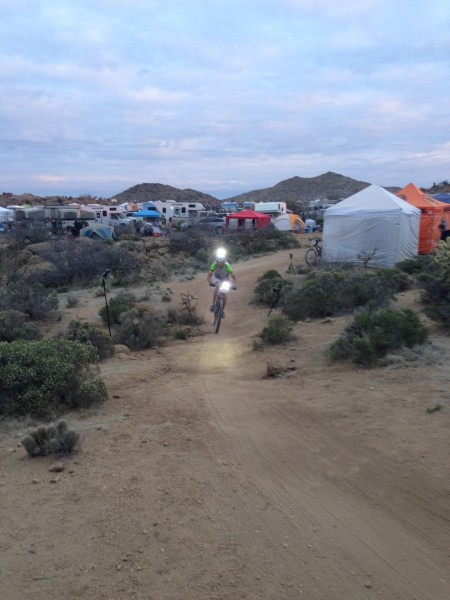 A little flavor of 24 Hour Town. 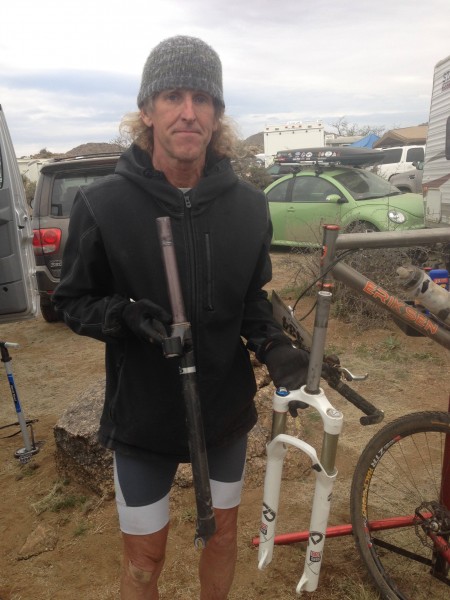 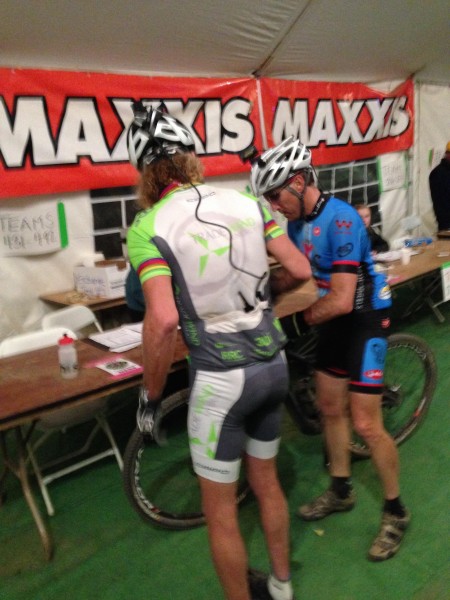 Vincent and I exchanging in the middle of the night. 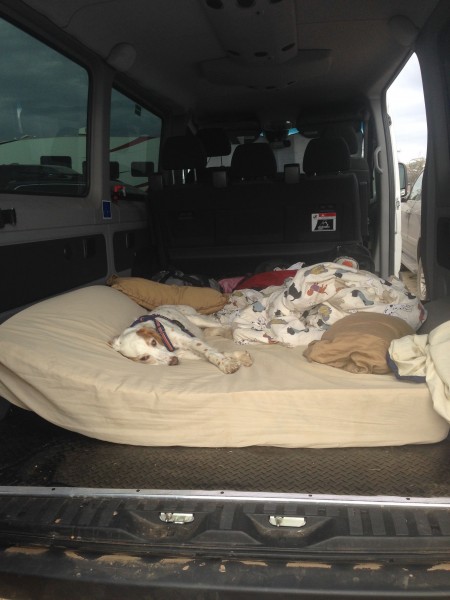 Bromont didn’t miss a beat of sleep the whole time. 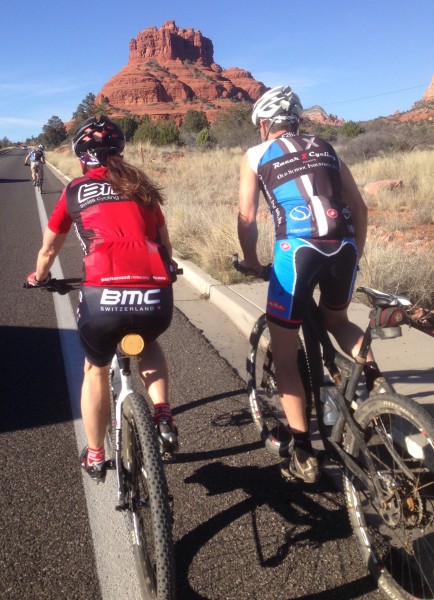 Trudi and Vincent heading out to the trail in Sedona. 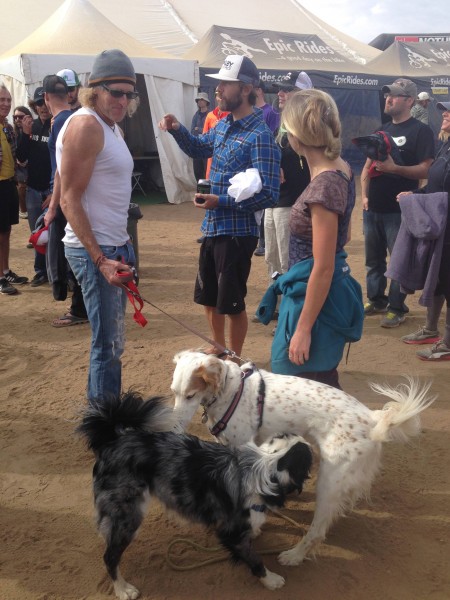 JHK and Heather were there. The races theme was love, since it started on Valentines Day, so they dedicated the race to a racing couple.  Bromont loves their dog. 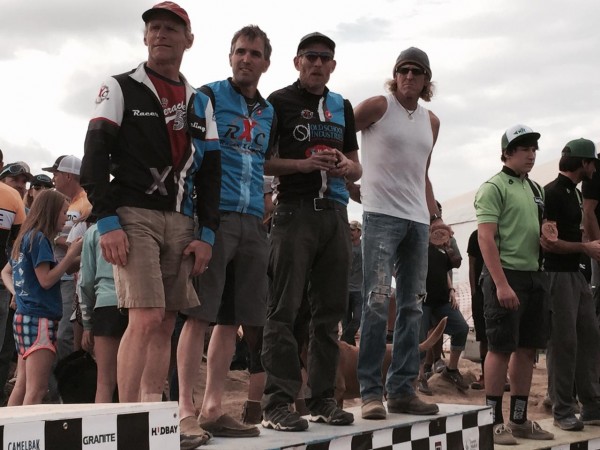 There was absolutely no podium etiquette at this race, which was super appropriate. This is my team, Bob, Vincent, Keith and me, as a guest rider. 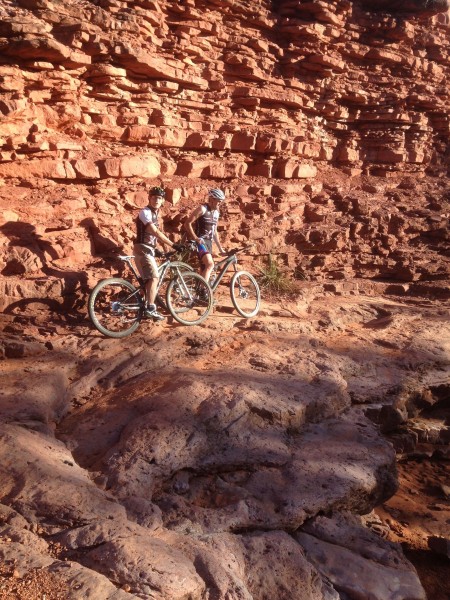 Bob and Vincent out riding yesterday. 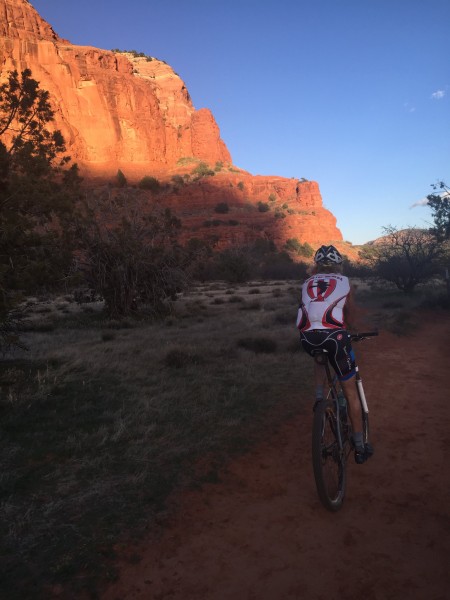 It was getting dark as we were getting back. 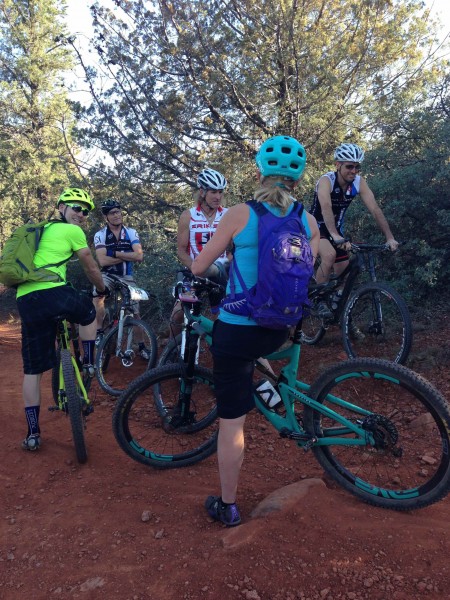 Meeting up with Tim and Sue Butler out riding in Sedona.