I saw a few articles the last couple days about a new group of riders that have gotten together to form an association that is going to be affiliated with the CPA Pro Riders Union, where, I guess, the North American Pros will have a voice in that group.  It is called ANAPRC – Association of North American Professional Road Cyclists.

I’ve seen conflicting membership lists, but Cyclingnews has these guys, Christian Vande Velde as president, Lucas Euser, Brent Bookwalter (BMC), Ted King (Cannondale-Garmin), Tejay van Garderen (BMC), Matthew Busche (Trek Factory Racing) and Peter Stetina (BMC), as the initial board of directors.   I know most of these guys personally and the ones I do know, are good guys for the positions.

If you notice, all these volunteer directors are on Pro Tour Teams, minus Lucas, who rides for United Healthcare, a Pro Continental team.

I think it is a little early to comment much about what this association is going to accomplish,  but I’m not too big  on what I read in  the Velonews and Cyclingnews articles, which lists their current agenda.  On their website, and in the articles, it lists their #1 agenda, and only agenda as of now,  as a weather protocol issue.  It states –

I don’t even know how this even got on any agenda of this organization.  If I were to list the top 50 things that North American “Professional” bike riders have issues with, this wouldn’t be on my list.

Historically, cycling is a hard guys sport.  Many of the epic races historically have involved both precipitation and temperatures.  How about Andy (Hampsten) taking over the race lead in the Giro on the Gavia Pass.  I guess we’d just throw that one out and start all over the next day?  And Greg Lemond outsprinting Sean Kelley in the rain at The World Road Championships?  Neutralize that one?  Epic conditions make memorable bike races.

Maybe they should consider a heat rule, so if it’s too hot, maybe over 40 degree C, then the race is neutralized?  The list could go on and on.

I do understand safety concerns.  But, that really is an issue between the UCI and their officials.  The sport has always been dangerous.  Our biggest danger isn’t weather related.  If it is, maybe never start another criterium when the course is wet.  I forgot, UCI Pro Tour riders don’t really race criteriums.  Especially wet ones.

Like I stated above, all the riders listed above on the board are salaried bicycle racers.  Their concerns are obviously different than the majority of North American professional cyclists.  But, there are how many North American riders on Pro Tour teams?  Maybe 20 max.

Nearly all North American professional bike racers are racing on Continental Teams.   And most of these riders  are drawing minimal, if any salary, at all.   This organization probably isn’t going to represent them too well if they don’t move on from the weather protocol and start addressing real concerns of American professional cyclists racing domestically.

Our domestic Pros are more worried about how to get to the next race.  Like, whether they are going to loose their job because they turn 28. (UCI Rule 2.17.005 For continental teams, the majority of the riders must be under the age of 28.)  Or how to pay their rent, or about getting their Di2 rear derailluer replaced after they fall at a local training race, than whether a race they go to will be cancelled at the appropriate time because of weather.

Last year, at Joe Martin, I lined up on the 2nd row of the criterium, the final day. The front row was the top ten in general classicification.  The weather was iffy and it looked like it might rain.  I was checking out the tires of the guys lined up in front of me.  I think all, but one, were on  professional teams, Continental Teams.

The tires were scary.  I mean, sketchy scary.  I don’t think half the guys were riding tubulars.  And more than half the guy’s tires were so worn out that I would hardly have ridden them training.  The guy directly lined up in front of me was riding worn out Contiental Gatorskin tires.  Probably the worse tire you could ride in the rain.    And these were professional riders at a NRC Stage Race.

This is just one example of issues that US Professional riders here have.  I don’t think many are concerned about race cancellations because of weather.  I could be wrong here, but I don’t think so.

I don’t believe that because one stage at the Giro last season was screwed up, makes the subject the number one priority for the new North American Riders Association.

Anyway, this organization is in its infancy.   I’m not even sure I qualify to join.  Hopefully when the elections happen later this season and they get more established, then the group can start addressing real issues that North American Professional riders are having and not be concerned with the CPA agenda or where ever they came up with this weather protocol “problem”. 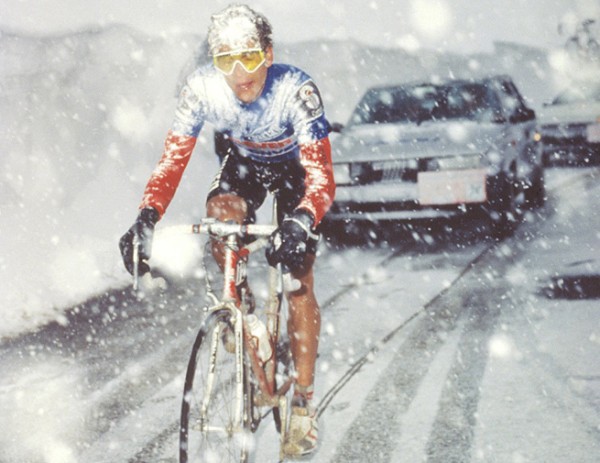 Andy riding into the pink jersey at the Giro, in the snow. 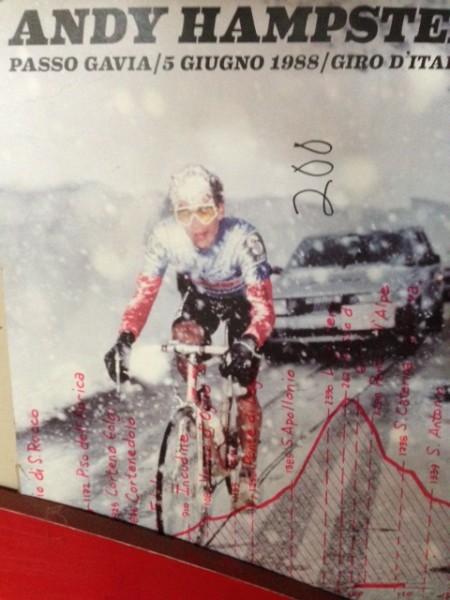 “Official” poster from the day. I took this photo at Andy’s Frame company yesterday here in Seattle. I went by to visit Andy’s brother, Steve. 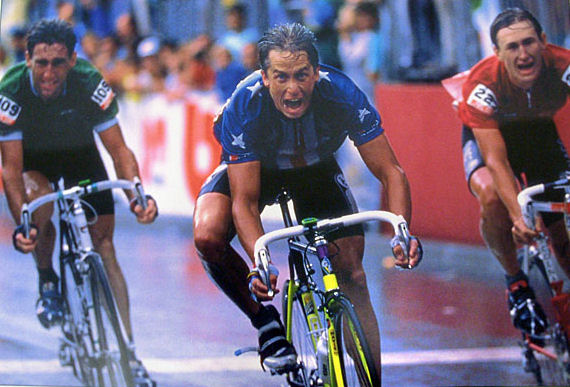 And Greg winning the World Road Championships, in the rain.